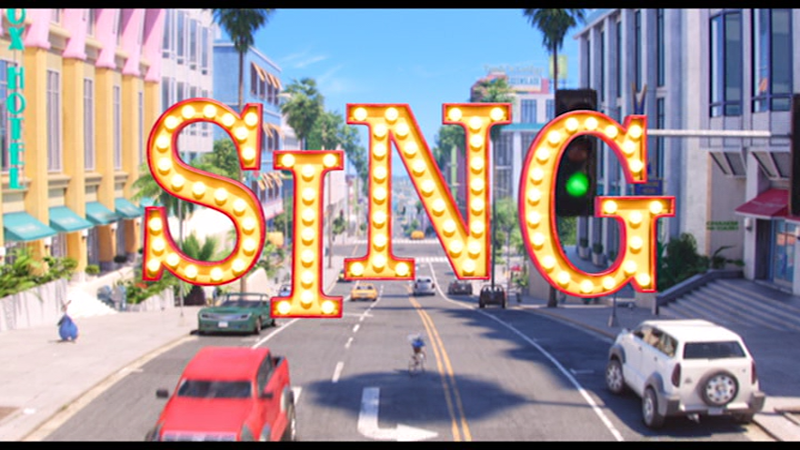 Images are for illustration purposes only, and do not reflect the Blu-ray image quality


The Movie
After a long run atop mainstream popular culture, singing competitions have finally taken their long-awaited dive into semi-obscurity, with only The Voice hanging on as a ratings champ, thanks to the appeal of the all-star coaching staffs and a general lack of competition in the field. Considering the general apathy/exhaustion directed toward singing competitions, it probably wasn't the best time for a movie based on the reality-show concept, but here comes Illumination's Sing, a bend of Zootopia's anthropomorphic society and American Idol's offer of the dream of pop-music stardom.

It's not entirely fair to say that, mainly because there is no TV show in Sing. Rather, it's a theatrical talent competition, put together by Buster Moon (Matthew McConaughey, at his least McConaughey yet), a koala whose father busted his fuzzy hump at the family car wash to help his son open the Moon Theater, which he's driven into the ground with a string of box-office failures. He comes upon the bright idea to put on a singing competition with a grand prize that gets exaggerated thanks to his feeble assistant Miss Crawley (director Garth Jennings), drawing everybody in down with a dream of stardom and, more importantly, big bucks.

Naturally, that group is huge. Though the film's core story, focusing on Buster's efforts to save his theater business through the singing competition, is straightforward and easy to follow, the bigger group of competitors threatens to be unwieldy. Using a visual take on the idea of scanning through the radio dial, the film quickly establishes all the main players and the obstacles to their dreams, including Rosita (Reese Witherspoon), a pig with 25 kids and an unappreciative husband; Johnny (Taron Egerton), a gorilla whose dad wants him in the family business--crime; Ash (Scarlett Johansson), a punk-rock porcupine with an unsupportive partner; Mike (Seth MacFarlane), a crooning mouse with an attitude many times larger than himself; and Meena (Tori Kelly), an insecure elephant. 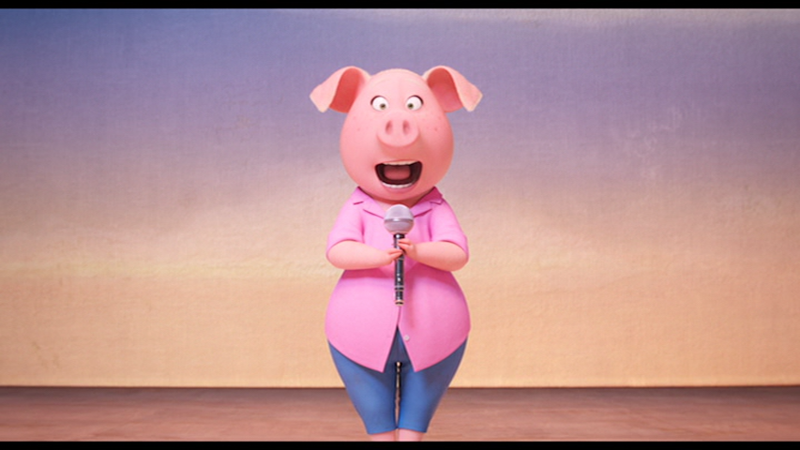 Now, you might wonder, what about the dancing German pig who was in all the ads and trailers? You know, the guy who's dead center on the cover art and the main image on the back? Well, Gunther (Nick Kroll) is mainly a sight gag, and is never, in any significant way, developed as a character. The filmmakers knew what they were doing when they peppered him throughout the film, as his every appearance is guaranteed laughter from the younger viewers in the audience. It wouldn't have taken much to give him more dimension than bluster and a funny accent, but he's just a clown, here for your amusement.

The film tries to straddle the line between story and simple crowd-pleasing, never afraid to use a device as base as a fart joke, but also getting into real emotion, as the characters try to achieve their goals. Of course, the music is the main draw, and the film has more recognizable hit songs in its soundtrack than just about any film in history. A healthy portion of the budget had to go toward paying for music rights, which pays off, as Egerton and Kelly's voices are magnificent in singing the songs of Elton John and Stevie Wonder, while Witherspoon does a surprisingly solid Taylor Swift. Johansson is no slouch either, getting the film's key original song, "Set it All Free." Its catchiness shouldn't surprise, considering it's written by the same guy (Dave Bassett) behind the big hits "Ex's and Oh's" and "Fight Song" (though it does feature one of the most egregious forced-rhymes ever.) As we've heard MacFarlane's jazz before, his ability is less revelatory, even if his "My Way" is pretty great.

The only issue with Sing--and it's a pretty big one--is that it's utterly predictable. If you're paying attention, you know exactly where this film is going way in advance, and pretty much everything follows just as you would expect it would. Nothing about the plot surprised, but honestly, it didn't matter much. The film is a genuine crowd-pleaser, giving the viewer just what it wants, and wrapping it all in melodious music, not to mention some truly impressive animation, with the action scenes (particularly the film's signature set-piece) being masterfully rendered and choreographed. It's not the most challenging film ever, but boy does it feel good to watch. 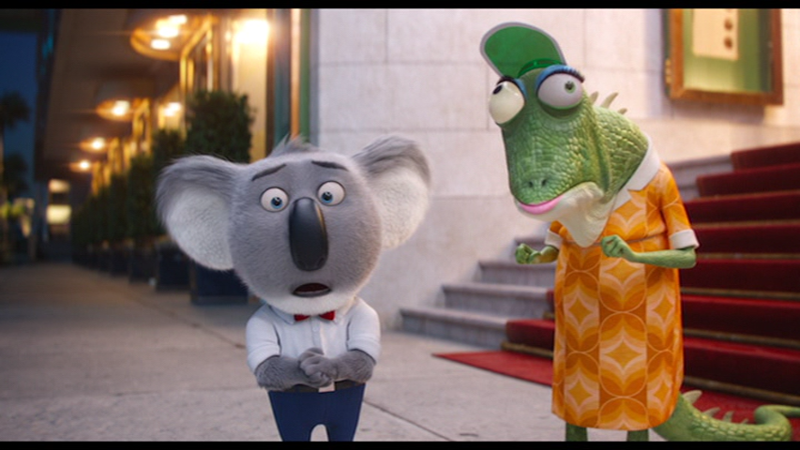 The Discs
The film arrives on a Blu-Ray disc and a DVD, in a standard-width, dual-hubbed BD keepcase (in an embossed, holofoil slipcover) with a promotional insert. The Blu-ray sports a simplified version of the Universal curve menu, with options to watch the film, select scenes, adjust the subtitles and check out the extras. The disc offers audio in English Dolby Atmos, Spanish Dolby 7.1, French Dolby 5.1 and Descriptive Video Service, while subtitles are available in English SDH, French and Spanish.

The Quality
The 1080p, AVC-encoded 1.85:1 transfer here is a great way to appreciate all the visual sparks that the film throws your way. Sing's cartoonish take on photorealism is loaded with tons of detail and bright color, whether in the gorgeous architecture of the city, the fur and so forth of the animals or the varied costumes worn by the characters, which utilize a wide range of textures and styles. The image quality really lets the fine-grain animation work shine, especially the impressive depiction of fluid (an Illumination strength.) Strong saturation and appropriate hues ensure everything looks great, whether in the more vivid daytime scenes or the darker evening moments, when deep black levels ensure proper delineation, with the dark hair of the gorillas offering a challenge the presentation meets handily. Digital distractions are not a concern, though there was one moment of slowdown during a particularly hectic scene.

The Dolby Atmos track will resolve to a Dolby TrueHD 7.1 presentation for the majority of the audience, and the sound is fantastic, giving the film's copious musical tracks the right soundstage, while keeping all elements well separated. Bass kicks in when appropriate, giving weight to larger characters' presence and voices, as well as selling the film's action scenes, which are quite boisterous. Atmospheric effects are often in play to fill out a scene (thanks to the busy city settings), while dialogue is strong and well-positioned, with the scenes set in the Moon Theater sounding particularly well-crafted. 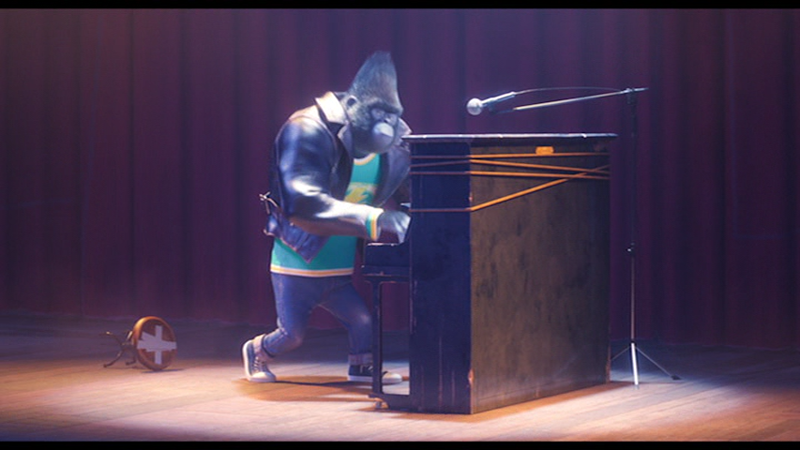 The Bottom Line
Based on its recent output, Illumination is carving out a spot for itself by serving up easy-to-digest crowd-pleasing fare, hitting topics everyone likes, like dogs and pop-music, with less story-centric films. And the results, which feature tremendous animation, are hitting the right notes (sorry), with fun, if forgettable productions. The Blu-ray looks and sounds terrific, though the extras are more brief and more kid-friendly than adult fans of animation are likely to appreciate. With the right mindset, Sing makes for an enjoyable evening of family viewing, with songs that will stick with you for a while after.