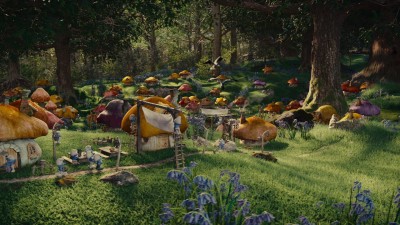 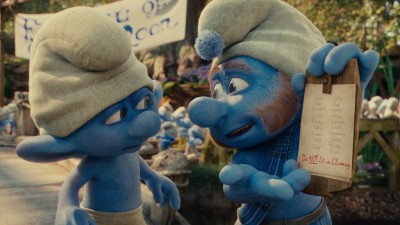 *All images in this review are from the Blu-ray disc. Click on each image for full 1080p screenshots.

You know, a number of people see a film like The Smurfs coming and immediately dismiss any possibility that it could, in fact, be entertaining. They believe that being an adult means you can no longer appreciate films that appeal to children, and when coupled with what appears to be a cash-in on 80's nostalgia, they twist their noses up in the air and move on with the rest of their lives… and it's a shame. My son is almost 7, and I've enjoyed a great number of films that we had taken him to see. He was a little too young to enjoy The Smurfs when it first came out though, and it's never been at the top of my ‘catalog titles to get' wishlist, but now that Sony have seen fit to distribute this film on UHD, it was the perfect time for us to sit down and see what it was all about. I found that while it's predictable and dabbles in the usual themes we expect from family oriented entertainment, it's still more than enough fun to justify the time to see it with your family, or even by yourself.

You may remember these little blue humanoids from the 1980's television series as produced by Hanna-Barbera Productions, but what most people probably aren't aware of is that The Smurfs were actually conceived in 1958 as Belgian comic characters. Animated films had followed in 1965 and 1976, the latter of which came to the United States in 1983 as The Smurfs and the Magic Flute. By this time, the animated series had already been in full swing for a couple of years, and subsequently went on to become one of the longest running Saturday morning cartoons ever. 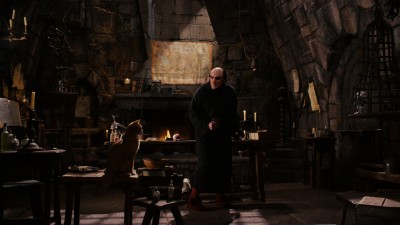 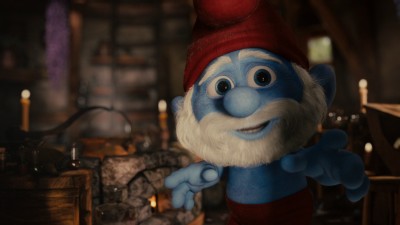 The film adaptation opens with The Smurfs - each named after their primary character trait, such as Grouchy, Brainy, Gutsy, Handy, Jokey, Greedy, etc. - having a grand old time preparing their village, mostly comprised of houses made from mushrooms, for the Blue Moon Festival. Everything goes swimmingly until Papa Smurf sees danger brewing in his cauldron, with visions of Clumsy Smurf reaching for a dragon wand, and worse yet, Smurfs locked up in cages while their human arch-nemesis, Gargamel - who wants to use them as charms to make his evil magic more powerful - laughs maniacally at their misery. In order to prevent this from coming to pass, Papa forbids Clumsy from picking any more Smurf Roots. Of course, nobody likes to be told what to do, so Clumsy pays no mind to Papa's orders and goes on about his business. Well, Clumsy's disobedience leads Gargamel and his cat Azrael straight to their village, leaving the blue ones no choice but to drop everything and flee for their lives. Clumsy, Papa, Gutsy, Brainy, Grouchy and Smurfette run to Forbidden Falls and are unexpectedly sucked into a vortex that transports them to New York City. Once there, they befriend the Winslows, a lovely couple which agree to let them stay in their apartment until they can find their way home. Unfortunately, this is no easy task, as the return portal only appears once in a literal blue moon. Furthermore, Gargamel and Azrael have followed The Smurfs to the Big Apple, and considering the Smurfs are all that stands between him and ultimate magic power, they'll stop at nothing to catch them.

Now, on a conceptual level, I get annoyed when characters that had only previously existed in drawn or animated form are tossed into the ‘real world'. It comes off like a gimmick, a mere excuse to have the faces of big stars appear on promo material leading up to a film's release. But you know what? This approach worked well enough for Garfield, Alvin and the Chipmunks, and it works rather well for The Smurfs, too.

The live action cast members are obviously secondary to the little blue crew, and while they don't add anything extraordinary, they don't feel like a distraction from the main event. I mean, Neil Patrick Harris (How I Met Your Mother) and Jayma Mays (Glee) aren't exactly provided with award winning dialogue, but they're adorable as an on-screen couple and fill the ‘comically inconvenienced' role admirably. Sofia Vergara (Modern Family) and Tim Gunn (Project Runway) have smaller parts, but as victims of Gargamel's power, their contribution is still fun to watch. 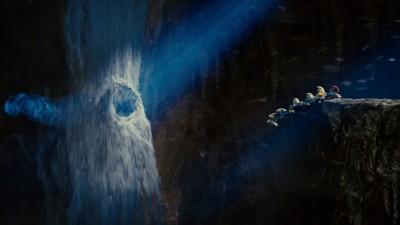 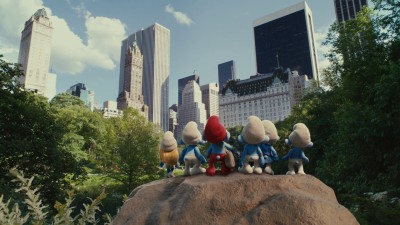 And speaking of Gargamel, if there's anyone that even comes close to stealing the show from The Smurfs, it's Hank Azaria (The Simpsons). He's so effectively animated, and brings so much humor to his portrayal of the character as a result, that it's hard to imagine anyone else in the role. If you had a different Gargamel, it would have been a completely different movie, and probably to its detriment.

But even with Azaria's talent on-screen, The Smurfs are still the primary draw. They're so consistently entertaining, and that's due in part to their extremely different personalities, which are sort of a new-age take on Snow White's seven dwarves. What also helps are all the engaging personalities voicing these characters, such as the late Anton Yelchin, Katy Perry, Fred Armisen, George Lopez, John Oliver, and least not of all, Jonathan Winters, the man who voiced Papa Smurf in the 80's cartoon.

If there's one complaint I have about this film, it's that a lof the story and character beats are as generic as they come. That said, if you're walking into this expecting deep thematic elements and character depth that would make Jules Verne blush, you have bigger problems that need tending to. This is all about sitting down with the family and having a good time, and The Smurfs delivers on that front and then some. Sure, there are certain family-friendly films that are a little too watered down, even for my liking, but this isn't one of them. 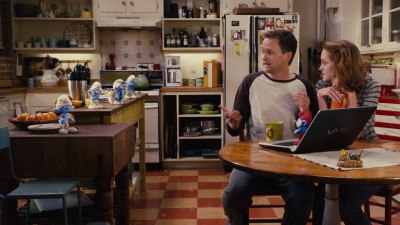 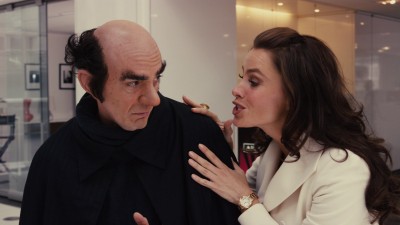 The included Blu-ray, presented at 1080p via the AVC codec at 1.78:1, is absolutely marvelous. There's a lot of eye-popping color in this film, and all of it impresses as it should. Black levels were solid, never edging into ‘crush' territory, plenty of fine detail can be seen, and there's no digital anomalies such as banding, digital noise reduction or artificial sharpening to complain about either. This disc is years old (originally released in 2011), but it's still a solid 5/5 as far as that format is concerned.

And yet, the UHD improves upon the video in every perceivable way. Presented at 2160p via the HEVC codec at 1.78:1, regardless of how you feel about The Smurfs (our very own M. Enois Duarte didn't care for the film much), this is a reference quality disc. The increase in resolution and the addition of HDR make contrast and color saturation look far more impressive. Fine detail has been given quite the boost too, providing the image some very convincing dimensionality. What's surprising is that this film had a 2K DI, and was subsequently upconverted for this release. I mean, I'm of the opinion that films sourced from a 2K DI are still noticeably better on UHD, but I don't think I've seen this much of an image improvement to date, and that's saying a lot because the Blu-ray was already immaculate. If there's any question if a family friendly film from 2011 can truly benefit from the UHD format, the answer is most certainly yes. 5/5.

The previous Blu-ray release had been equipped with a 5.1 DTS-HD Master Audio track, and from what I was able to tell, it replicated the source without issue. The dialogue was crystal clear and the more exciting sequences and excellent surround placement, even with environmental sounds. The score is slightly understated as to not overwhelm everything else, but it still had significant presence as it also utilized the surrounds to great effect. 4.5/5.

The UHD has been treated to a Dolby Atmos track, and just so you're all aware, I don't have ceiling mounted speakers, nor do I have anything that will upfire sound for the illusion of overhead audio. My home theater is simply configured for 7.1 surround, but even so, there's a difference between both formats, with the nod going to UHD. The surround stage sounds as if it's been expanded some, allowing everything to have better pinpoint placement across the board. Again, for a family film, I'm surprised there's this much attention to detail. The score also seems to have been giving a tad more breathing room. Basically, this track takes everything that was excellent about the Blu-ray's, and much like the video, improves upon it.

-Smurf-o-Vision: Second Screen Experience - It's a neat feature, I suppose. If your player is connected to the internet, you can take a tablet or phone that's also connected to the internet and view additional information/content while you watch the film. That said, I'm against this sort of thing. The last thing I'd encourage while watching a film, is whipping out an electronic device which will inherently distract you from enjoying said film. This is also a family film, and I wouldn't want to train my kid to do this either.

-The Smurfs Fantastic Adventure Game - A cute interacting game you can play directly on your player via the remote. It won't engage adults by any means, but kids should enjoy it if they haven't already been subjected to the likes of the Nintendo 3DS or Wii-U.

-The Smurfs: Comic Book to the Big Screen - A short featurette which details how the film's artists transitioned the Smurfs from the small screen to a major motion picture set in the real world.

-Smurf Speak: Meet the Cast - In this featurette, the voice actors discuss how they helped bring their blue on-screen counterparts to life.

-Going Gargamel - Cast and crew discuss Hank Azaria's approach to playing the ‘animated' villain, and Azaria himself even provides a little insight.

-Progression Reels - A handful of extremely short featurettes which detail certain aspects of the film's production. This is really more like promo material than anything else, though. -Blue-pers - An extremely brief gag reel that's less than 30 seconds long.

The UHD itself has Cast and Crew stills, and there's also some brief video content in Moments, which is a small handful of short featurettes. 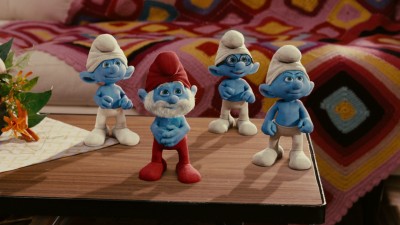 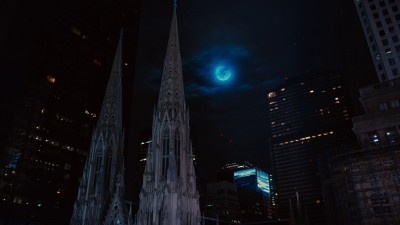 The Smurfs is a by the numbers affair, so there's no real surprises and you can predict what will happen at every turn. That said, this is a really fun film loaded with lots of fun and laughs, thanks to the Smurfs extreme personalities as conveyed by the stars that voice them. Furthermore, Hank Azaria is probably the best Gargamel fans of the franchise could have hoped for, as he nearly steals the show every time he's on (nearly, but not quite). After all is said and done, I think those that generally appreciate family films will get a kick out of this movie, while those who have sadly grown away from them should probably find something else. From a technical standpoint, this UHD has better audio and video than I had anticipated - in fact, it's practically reference despite coming from a 2K DI - although I wish the supplemental package had a little more meat on its bones. My heart wants to give this release a ‘highly recommended' rating, but since I know this kind of movie isn't for everyone, I feel more comfortable with the ‘recommended' rating.