They're Playing with Fire

Another title to add to your "I can't believe they put this out on Blu-Ray" list, 1984's They're Playing With Fire has arrived from Kino Lorber. Released by New World Pictures after Roger Corman had sold the company, it's notable mainly for being the follow-up movie appearance from Eric Brown, the lucky kid in the 1980 classic Private Lessons. In that movie he was seduced by his older housekeeper in scenes that still have me wondering how they got away with filming at his age, and here he's seduced by his older college professor. 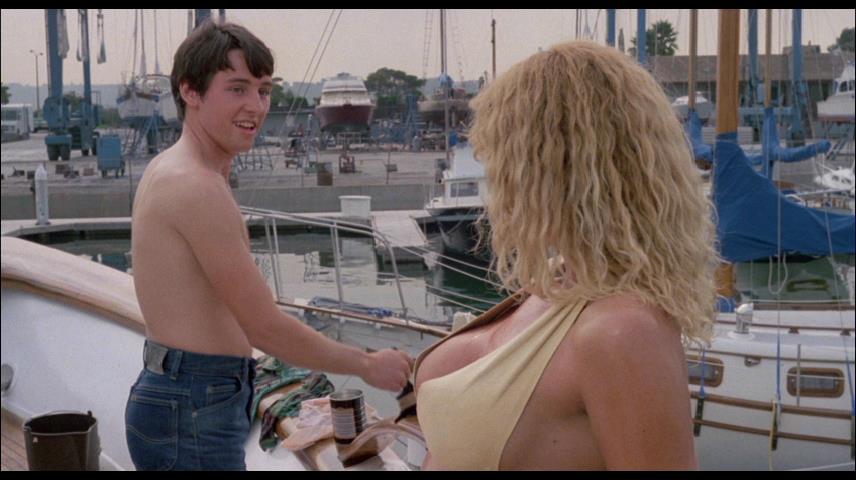 Directed by Howard (AKA Hikmet) Avedis, this calls back to his 1974 movie The Teacher which starred Angel Tompkins in the title role seducing her student played by none other than former "Dennis the Menace" Jay North! Here the buxom Sybil Danning plays literature professor Diane Stevens, who knows a thing or two about Shakespeare but has a tendency to distract her students with her looks. You can pretty much tell where this is going from the beginning, when she asks student Jay (Brown) to have a word with her after class- seems that Jay is rather broke (he works at a gas station) and she offers him some extra cash painting the yacht owned by her and fellow professor-husband Michael (Andrew Prine). She hangs around in a bikini while he's working on deck, and while showing him what needs touching up in the bedroom the bikini quickly comes off and the two of them are doing the deed in no time- at which point Mrs. Stevens tells Jay that "you can call me Diane."

But just as there was an ulterior motive for the shenanigans in Private Lessons, it turns out that Diane needs Jay for more than just a roll in the hay. Having convinced him that he can trust her, she and her husband explain their predicament: Michael's mother and grandmother are living in a nice big mansion and while grandma is wheelchair-bound and senile she just refuses to die- if she would hurry up with that and get his mom to follow, then he and Diane can move in- they already have a rather decent house, but that's beside the point. He thinks that if they get a good scare, then that'll at least make them leave for an old folks' home, and that's where Jay comes in: he's asked to break into the house at night and scare them so much that they'll just run out and not want to come back. Seems simple enough, but a few things go wrong: though the cellar is very easy to break into, for some reason Jay goes in there in the afternoon and has to wait several hours til the old bags go to sleep. He just can't stay put that long and inevitably knocks some junk over, alerting grandma's vicious poodle and prompting mom to go down and check it out. As she sees him running away, she shoots at him which freaks him out as he wasn't expecting any guns to be involved. Jay then has to tell Diane and Michael that he blew it, but while that's happening a mysterious figure shows up in the house and kills both of the old ladies! Once Diane and Michael find out they've been killed, they're immediately afraid that they're going to be blamed for the murder and suspect Jay might have done it. Instead of going to the police, the three of them have to figure out a way to cover up the whole thing, which in most movies is a sign of more things soon going wrong.

So whodunit? Jay thinks it was Michael, and he searches for some way to prove him guilty. Michael thinks it might have been Jay but doesn't really have a way to back that up, and we're presented with a few more suspects such as the gardener, who Michael tells to take some time off as the residents have gone to Hawaii for a bit. Meanwhile we've got Jay's jealous ex-girlfriend Cynthia (Beth Schaffel) warning him that he's "playing with fire" and somehow snaps some very incriminating pictures of him and Diane on the boat, and a few classmates including Jay's roommate "Bird" (Paul Clemens) and klutzy Glenn (Dominick Brascia, who you might recognize from Friday the 13th Part V) in the background for little more than comic relief. While Jay's a bit scared that he's going to get busted for the murder or killed off himself, he still manages to get in a few more encounters with Diane before things come to a head and we find out who the killer really is, in one of the most ridiculous revelations I've ever seen on film. 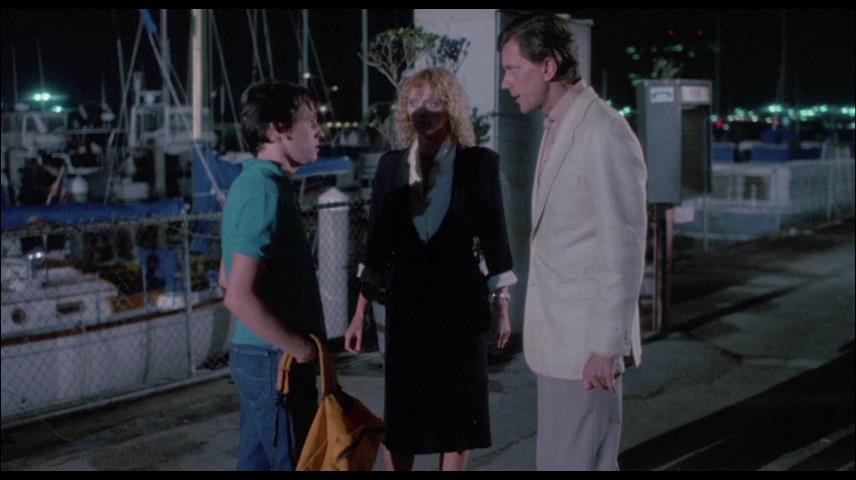 The hi-def transfer in 1.85 looks a bit out of focus, but the movie was likely meant to look like this and the presentation is preferable to any artificial sharpening that sometimes makes these sort of films look too good. Film elements are very clean and the disc is free of compression or banding even in dark scenes.

The mono audio track is encoded in 2-channel DTS Master Audio and stays properly centered. Quality overall is adequate but unremarkable, about on par with how it sounded on VHS. 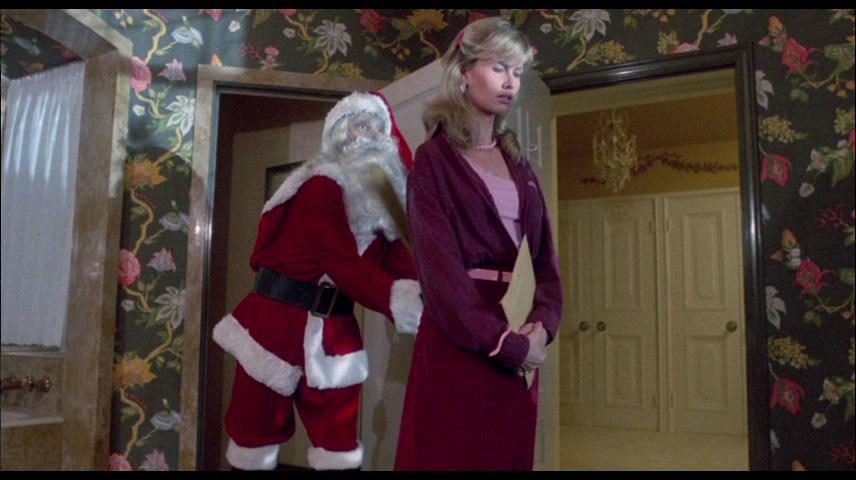 This Blu-Ray includes a surprisingly insightful feature titled "Sun and Seduction With Sybil Danning" where she looks back on the movie and some of her others made in the 1980s. She remarks matter-of-factly that she was usually cast in movies because of being recognized from Playboy magazine and being "OK with taking my clothes off." Her most jaw-dropping comment was about co-star Eric Brown, who she described as "stiff" and not seeming to be into the movie, remarking that she "should get an Oscar" for how it turned out. (Eric Brown himself left acting a while ago and seems to keep a low profile nowadays, but I would love to hear about his experiences making this and Private Lessons whether good or bad!) Danning does complement much of the remainder of the cast and crew, mentioning that the movie's director of photography had worked on theatrical porn movies and for Orson Welles!

The movie's trailer is included in hi-def, along with 4x3 standard-def trailers for the 70s Joan Collins masterpiece The Stud and its sequel The Bitch, though the menu has them in the wrong order. 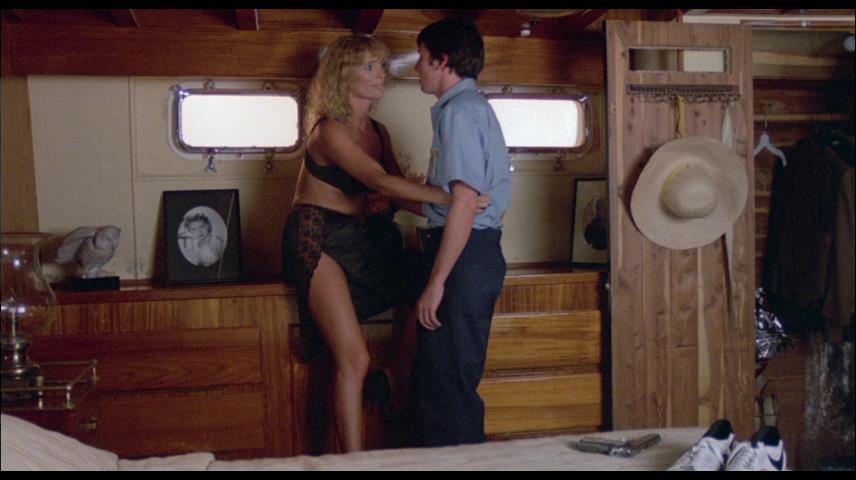 I had only seen They're Playing With Fire on VHS long ago (and had to go out of town to rent it, as no local stores even had it) and missed the Anchor Bay DVD that was out before, so I'm glad Kino saw fit to release it on Blu-Ray in an archival quality presentation with some noteworthy present-day thoughts from Sybil Danning. (I'm hoping this will mean more New World Pictures releases on Blu-Ray as well.) It walks just the right side of the line to fall into so-bad-it's-good territory and gets a Recommended for fans of 80s schlock, but I'd still advise anyone who only watches "good" movies and doesn't see the attraction of bad ones to skip it as I don't want to be held responsible!