Lovers on the Bridge, The 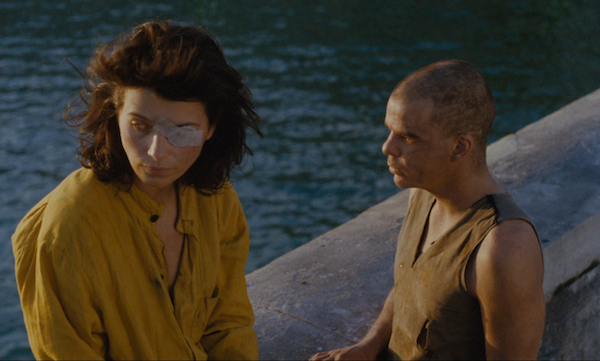 For years, the Miramax-created poster art for The Lovers on the Bridge (1991; released in the US in 1999) would stare at me while I was browsing through Netflix. With its blandly idealized image of a glowing Juliette Binoche being nuzzled by a partially obscured Denis Lavant, as their massive heads stare out blissfully over a picture-postcard image of Paris's Pont Neuf ("New Bridge") at night, I assumed the film was romantic pabulum and would give it a hard pass. Then, a few years ago, I watched the documentary Mr. X on the outstanding Blu-ray for Leos Carax's Mauvais Sang and discovered that The Lovers on the Bridge is actually one of Carax's madly idiosyncratic love screeds. Carax's sensibility may be romantic, but his romance is wild and unpredictable. Grungy and painful. There is nothing blandly picturesque about his filmmaking.

Considering Miramax's spotty history with affording their acquisitions proper respect, it comes as little surprise that their marketing department would try to bait-and-switch their audience to get butts into theater seats. Still, it seems an awful shame that they didn't see value in trying to connect this exemplary odd-duck of a film with a genuinely appreciative audience.

In fact, even though the production of The Lovers on the Bridge was an infamous money-burning disaster that stretched on for years (à la Heaven's Gate and Apocalypse Now), the end product is probably Carax's most accessible film. (Relatively speaking, of course.)

Craggy-faced acrobat Denis Lavant again serves as Carax's protagonist/avatar, Alex. This time, Alex is a vagrant and sometime street performer who lives on the condemned Pont Neuf. One night, Alex discovers Michèle (Juliette Binoche) sleeping in his spot on the bridge, and he notices a sketch she did of him when he was passed out in the road. Alex becomes fascinated with Michèle. He learns that a combination of a love affair gone wrong and a quickly accelerated eye defect have forced Michèle to flee her cushy middle-class life and wander the streets. She has one eye covered with a patch and seems to be counting down the days until she loses her sight altogether.

Inevitably, their shared squalor pushes Alex and Michèle toward an unusual romance. They laugh, drink cheap wine, and rob unwitting cafe patrons by drugging them with the downers Alex uses to go to sleep at night. As Michèle's sight continues to deteriorate, she comes to depend fully on Alex. Alex loves Michèle with every fiber of his being: he does Donald O'Connor flips in the subway for her benefit, because she can no longer make out tiny gestures or facial expressions.

The downside to the intensity of Alex's love is that he is intensely insecure, and that insecurity manifests violently. When Michèle is invited to sneak into the Louvre after hours by Hans (Klaus-Michael Grüber), an aged denizen of the Pont Neuf, Alex is so distraught by her absence that he slashes at his own belly with a broken bottle (Carax spares us the action but not the aftermath). Later, when Alex discovers that Michèle's family has posted dozens of "Missing" posters, trying to inform her that they've found a doctor to cure her, Alex lights them all on fire. Alex clearly worries -- maybe with good reason -- that Michèle won't want to stay around him, if she doesn't physically depend on him.

In constructing this iconoclastic melodrama, Carax affects both unflinching realism and overt stylization. In an early sequence, Alex is admitted to a homeless shelter, surrounded by genuine vagrants, apparently succumbing to various levels of substance abuse and mental illness. Later, Alex and Michèle celebrate their burgeoning affection by waterskiing down the Seine, while Bastille Day fireworks explode all around them.

Both approaches come off as utterly authentic thanks to the emotionally acute performances of the cast. Lavant, as ever, is an intensely physical performer whose every movement either represses or explodes with Alex's raw, unprocessed feeling. Binoche is similarly tapped into Michèle's overpowering emotions, although she exploits a certain understated elegance that allows Michèle to mask the intensity of these feelings sometimes, in a way that Alex never can. Grüber nearly steals the show as Hans, whose gruff exterior naturally masks a soft center -- but whose hurt plumbs surprising depths.

With this wonderful film, Leos Carax cements his status as a mad poet. Carax's late-film homage to L'Atalante aside, there is absolutely nothing like The Lovers on the Bridge. If you like your cinema bold, strange, and emotionally honest, you know what to do. 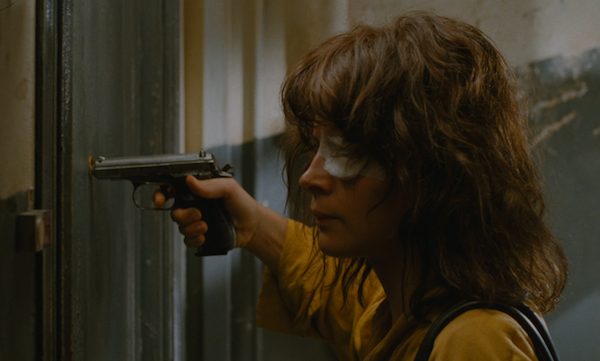 The Blu-ray
The Lovers on the Bridge disc is packaged with a color booklet featuring an essay by The AV Club's Ignatiy Vishnevetsky.

The Video:
Carax and cinematographer Jean-Yves Escoffier find plenty of poetry in their half-decrepit/half-glamorous milieu and this AVC-encoded 1080p 1.66:1 transfer does an absolutely flawless job of translating that look to HD. Colors are rich (especially the strong primaries of Binoche's wardrobe), detail reproduction is excellent. Film grain is well-resolved. The sequence in the homeless shelter seems to have been shot on grainier stock, but it still looks stylistically appropriate.

The Audio:
Apart from the over-the-top Bastille Day sequence, the French DTS-HD MA 2.0 stereo audio (with optional English subtitles) is not particularly flashy. Instead, it's carefully detailed and nicely textured which, in this kind of production, really does the trick. There are sporadic music cues (including a memorable Bowie song, naturally) that fill the space nicely.

(HD, 9:27) - A brief video essay on the way that Carax uses the titular elements to represent the struggle of the characters against their themselves and their environment.

Final Thoughts:
Leos Carax's ambitious and undeniably odd romance has never gotten a fair shake in the U.S., but this new Blu-ray offers such strong A/V specs that hopefully curious viewers will indulge in a blind buy. It's hard not to wish for more extras, but what can you do? Coming at the end of an informal trilogy that includes the similarly astonishing Boy Meets Girl and Mauvais Sang, The Lovers on the Bridge deserves inclusion in the DVD Talk Collector Series. 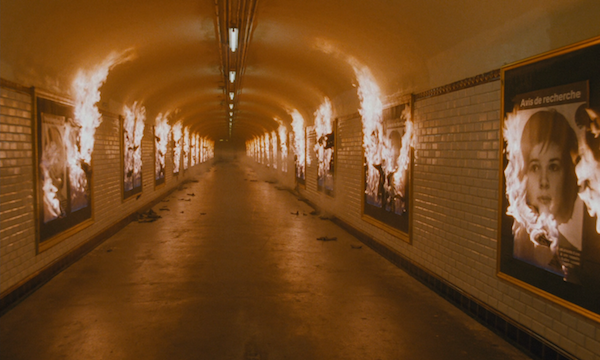