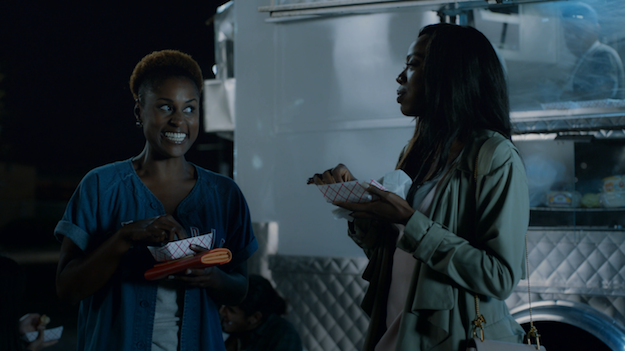 It shouldn't feel so novel, but it does. The new HBO dramedy Insecure, created by Issa Rae and The Nightly Show's Larry Wilmore, is a story of African-American characters in Los Angeles, staring down their fast-approaching thirties and attempting to finally get their respective shit together. These characters aren't idealistic projections of how black people should be viewed by the mainstream (read: whites), nor has the characters' cultural identity been carefully sanded down for easy consumption. The folks on Insecure just get to be people. Specific, imperfect, three-dimensional people.

Co-creator Rae also stars as Issa Dee, a creative young woman who nonetheless finds herself creeping toward stagnation at the start of Insecure's first season. She works for a youth outreach organization called We Got Y'All and kind of hates it. She lives with Lawrence (Jay Ellis), her smart but unemployed and unmotivated boyfriend; she kind of hates him too. She is jealous of her best friend Molly (Yvonne Orji), a successful lawyer, but nobody is perfect. Molly may be brilliant, but she is haunted by her pathological inability to hold onto a man.

Over the course of these first eight episodes, Insecure sends Issa, Lawrence, and Molly on a tough journey, littered with bonehead mistakes, toward eventually seeing their paths in life more clearly. Issa breaks up with Lawrence because she thinks she has a shot with the one who got away, a buff record producer named Daniel (Y'lan Noel). Lawrence goes back out on a job hunt, but drags his heels on putting himself out for entry-level work. Molly hits it off with a working class dude she meets at a club, Jered (Langston Kerman), but immediately gives him the slip once she gets accepted to a dating app for professionals.

Insecure can be riotously funny, but its greatest strength comes from its willingness to be unsparing and realistic. We sympathize and support these flawed characters, because they are generally fun to be around. But, like a long time friend, we are allowed to see when they are fooling themselves and following the wrong instincts. In lesser hands, certain story choices could come off as sitcom-y, but Insecure's writers keep character development as their primary concern.

Insecure also benefits from a cast of fresh up-and-coming actors. Rae and Orji have a deep chemistry that shows us these two friends have a long history, without having to load viewers down with backstory. As the men in Issa's life, Ellis and Noel have a relatively tricky balance to strike, encompassing the good and bad habits that alternately attract and repel her. That they pull off these turns in ways that make their characters seem more complicated, rather than merely arbitrary, is a tribute to the level of acting on the show. In smaller roles, Lisa Joyce and Maya Erskine shine as Issa and Molly's somewhat uncool but somehow more together co-workers. Tristen J. Winger has a charming small part as Issa and Lawrence's gang member neighbor who replaces the "C"s at the beginnings of words with "B"s, as in: "My daughter loves watching the Bare Bears."

The personal is universal, of course, and Insecure does an entertaining job of communicating a highly specific worldview -- that of young black women in the big city, pushing their way toward upward mobility -- that doesn't limit its audience to the demographic of its lead characters. It's a great show, period. And, apart from viewers put off by running jokes about having a "broken pussy," it's a show that will connect with a wide, diverse audience. 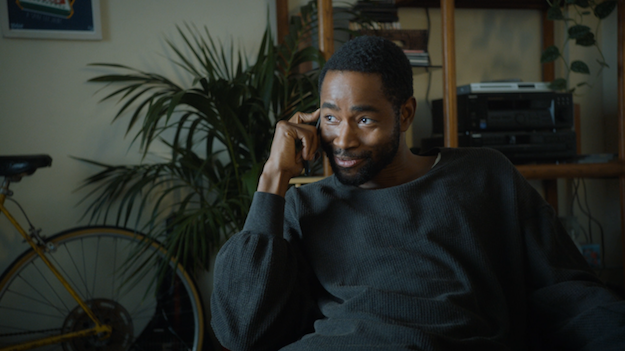 The Blu-ray
The 8 episodes of Insecure: The Complete First Season are featured on a single BD. The disc also comes with a Digital HD code that works with UV and iTunes.

The Video:
A strong reproduction of a brand-new show. The AVC-encoded 1080p 1.78:1 image is crisp and clean, with strong fine detail reproduction and saturated colors. I noticed sporadic banding around certain light sources and in a few other places, but this was the only major discernible flaw.

The Audio:
The main DTS-HD MA 5.1 surround audio serves the talk-heavy show well. Some atmosphere in the surrounds, and the many source music cues have got the right oomph. There are two audio dub options: French DTS 5.1 surround and Spanish DTS 2.0 stereo. Also, there are optional English SDH, plus French and Spanish subtitles.

(HD, 2:01) - A way-too-short discussion between Issa Rae and two of Insecure's producers about the vision and process behind the show.

Final Thoughts:
Issa Rae and an ensemble of welcome new faces bring honesty and relatability to the millennial angst of Insecure. Highly Recommended. 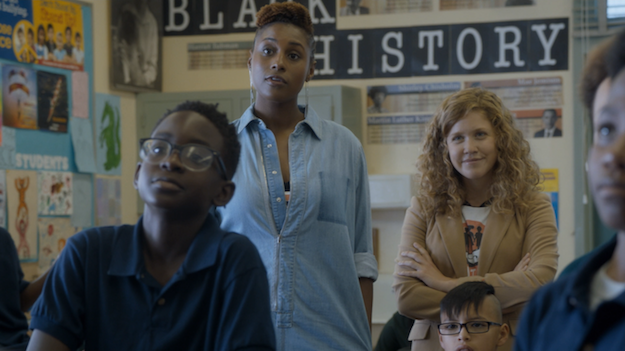