Fighter pilot James Bigglesworth (his friends call him Biggles) is one of those characters who is legendary in some parts of the world but pretty much unknown in others, including the good old US of A in this case. Created by British fighter pilot William Earl Johns, Biggles appeared in close to a hundred stories as well as a British TV series in the late 1950s. I had first heard of Biggles through a Monty Python's Flying Circus sketch and had thought they had come up with him as a sort of satirical hero, but then I later kept seeing a movie called Biggles: Adventures in Time showing up in the TV listings on the cable movie channels. Not having cable I couldn't just watch the movie when it came on to see what it was all about, and it was absent from all of the video stores that I frequented so it became one of those great unknowns for years until I was finally able to get ahold of this recent Blu-Ray disc release. It turns out that this movie was an attempt to get Biggles onto the big screen and finally become world-famous, but the result wasn't quite so successful. 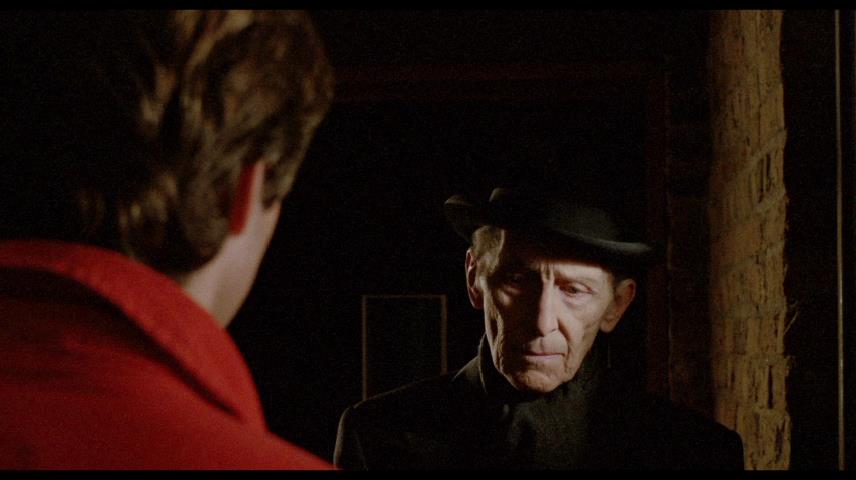 The movie first introduces us to New York marketing mogul Jim Ferguson (Alex Hyde-White) whose immediate concern is the design of a new line of frozen dinners. Colonel William Raymond (Peter Cushing, in his last screen appearance) trails him home from work and knocks on his door, wondering if "it's happened" yet. Jim dismisses him as a nut-job and closes the door on him, but after that is struck by lightning in his living room and suddenly finds himself in the year 1917, someplace in Europe during the first world war. A biplane crashes near him (in this hi-def transfer you can clearly see that it's being swung on the end of a cable) and he finds Biggles himself at the controls, unharmed. He's then quickly zapped back to his present-day (1980s) apartment wondering what the hell just happened. Over the next few days he gets randomly zapped back and forth in time again, and seeks out Raymond for further explanation. It turns out Raymond was Biggles' commanding officer way back when, but in a classic case of a movie not explaining itself enough Raymond simply says that Biggles is Jim's "time twin" and that he'll get transported back in time to where he is whenever he's in trouble and needs help. Later in the film it turns out the opposite is also true, as Biggles is zapped into the 1980s to get Jim out of a fix as well.

While the movie forces us to accept this whole teleporting thing with little explanation, we soon find out that the main reason for it is that the Germans have developed a secret weapon that could end up changing the outcome of the first world war, and Biggles is already out to destroy it but needs help from Jim. With its rather low budget and short running time, Biggles is one of those movies that falls quite short of its potential but is easily enjoyable accepted for what it is. The passage of time has certainly worked in its favor, as the 80s fashions and technology are the right age to laugh at, and it even includes a rather cheesy synth score which is a hallmark of a great B-movie of that era. Yes lead singer Jon Anderson even contributes a rather killer theme song that plays several times in the movie but never in its entirety. 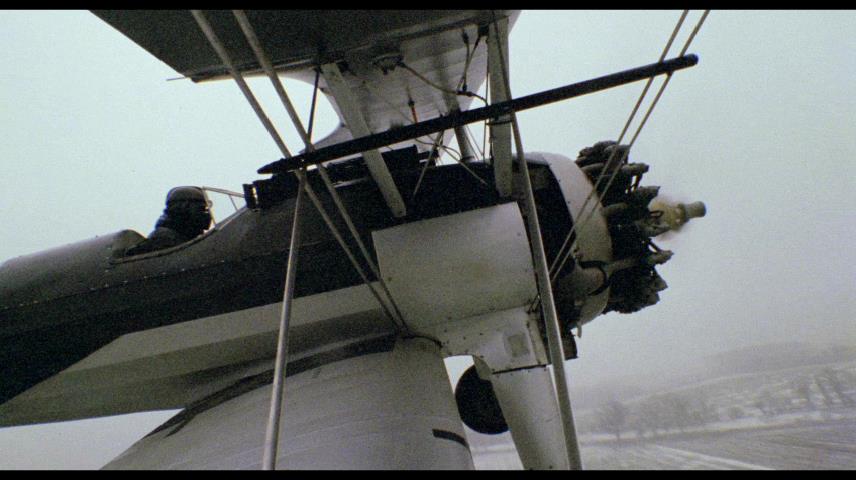 Presented in its proper 1.85 ratio, Biggles likely looks better on this Blu-Ray than it ever has before. As usual Kino doesn't do any unwanted messing around with the image, as film grain is left intact and the picture is kept in perfect focus, which is likely more than can be said of many of the theaters of that era (I don't even remember it playing anyplace remotely near me, not having heard of the movie at all until it started showing up in the cable listings.) Of course the low budget and a few production flaws also show up clearly, including several reflections and shadows of boom mikes which I can never resist looking out for. 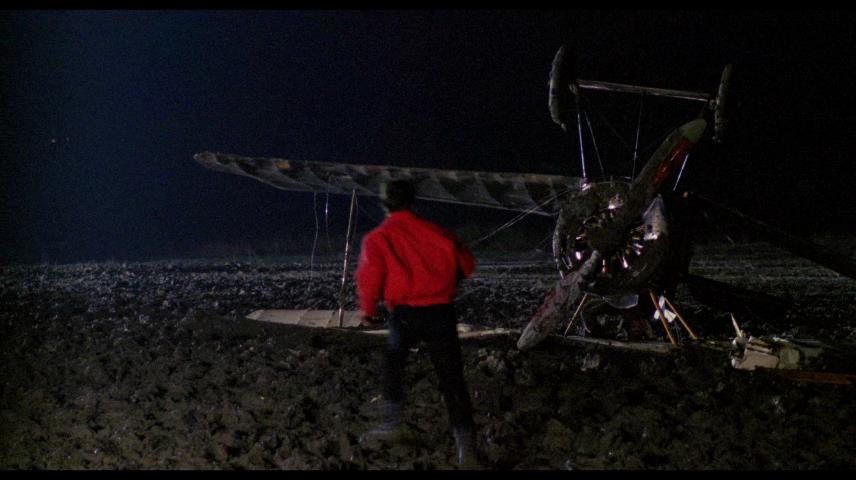 The Dolby Stereo track is the real star of the show here- encoded in 2-channel DTS Master Audio (which of course can cause a bit of problems and confusion with some setups), when Pro-Logic decoded it reminds me of some of the first thrills I got from VHS movies on the old Dolby Surround system our family picked up in 1989 (and I haven't watched a movie at home without some sort of surround sound since!) It was then that I learned that thunder and airplanes provided some of the best stereo and surround effects, and there's plenty of both of those in this movie- during the flying sequences it seems like the planes are flying right through your living room. 5.1- what's that? This is proof of how impressive many of the matrix sound mixes were. I did pick up a bit of odd crackling in some of the dialogue scenes which was likely captured during recording, but that's easy to overlook. 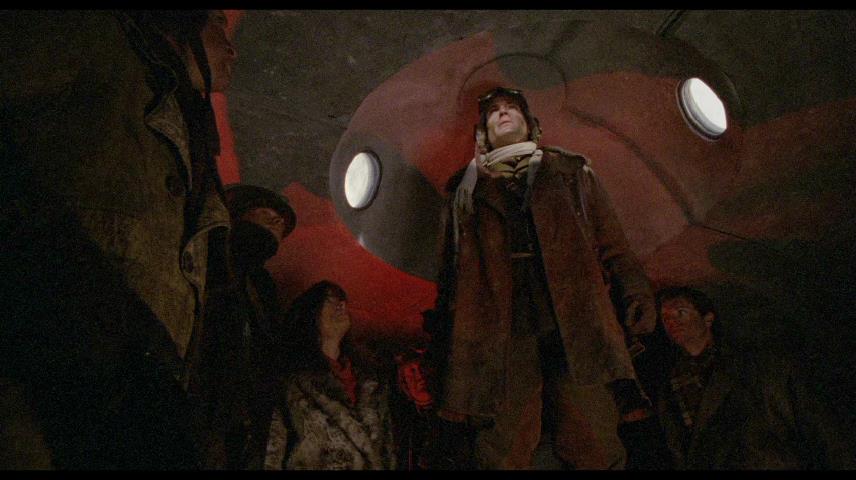 Kino has put together two interviews for this region A-only disc, quite impressive as it's a relatively unknown movie here. Neil Dickson and Alex Hyde-White each get about 9 minutes to share their thoughts and memories of shooting Biggles and we get some good info such as that the time travel element was brought in after the success of Back to the Future that year, even though that ultimately didn't help it make much of a splash in the US. The trailer for Biggles is not included which is a good thing in this case, as looking that up online I saw that it spoils a gag set up at the very end of the movie. Instead we get a 4x3 hi-def trailer for Zone Troopers, an upscaled standard-def widescreen transfer of the Cherry 2000 trailer and a 480i widescreen trailer for Solarbabies. 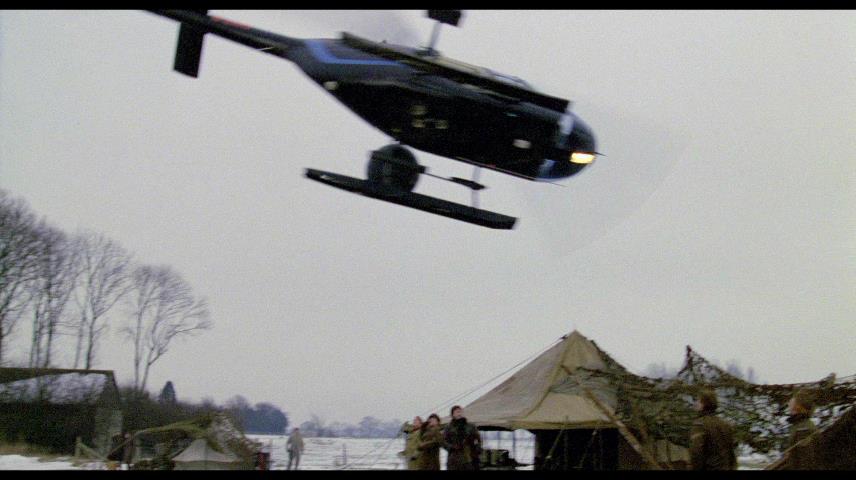 Had I managed to rent Biggles on VHS back in the 80s, I likely would've been left feeling a bit short-changed and confused (there was always that gamble of renting an unknown title, which could be a hidden gem or a total bore), as well as frustrated that I couldn't have rented something R-rated instead. However time has been more than kind to this movie and now is the perfect time for it to take its place alongside any other 1980s guilty pleasures you might already have in your collection.