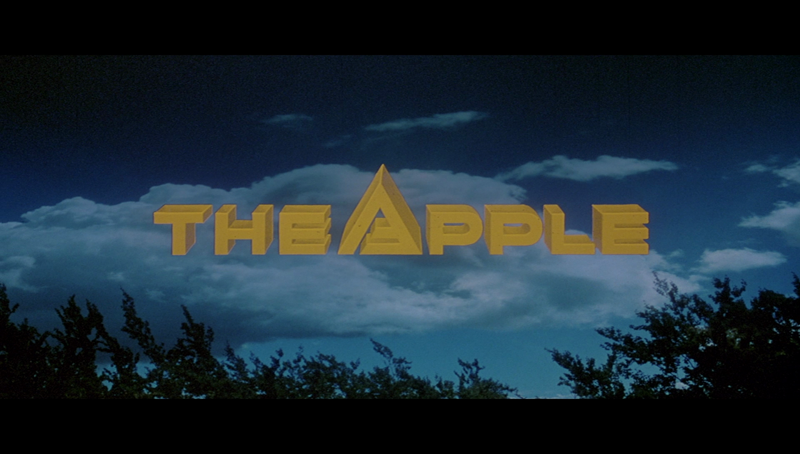 
The Movie
The Apple was originally written as a Hebrew musical about the fight between God and Satan, but when it was decided that it would cost too much to produce for the stage, producer Menahem Golan (of Cannon Films infamy) shepherded it as a film project that he would direct. At some point--with Golan getting severely hands-on--it transformed into the story of two young singers from Moose Jaw, Saskatchewan, Canada, who are roped into the music industry of a futuristic 1994, where Mr. Boogalow and his fascist BIM corporation run everyone's lives. If that plot sounds ridiculous, it certainly is, and so is The Apple, which makes little sense, up to and including a final deus ex machina with all but no punch and no satisfactory culmination of the story.

In 1994 (the filmmakers really could have pushed the tale a bit further than 14 years out), Mr. Boogalow (the ickily villainous Vladek Sheybal) essentially rules the world (or at least America) via Boogalow International Music (better known as BIM). Their main performers, disco-rock duo Dandi (Allan Love) and Pandi (Grace Kennedy), are dominating a big international music competition (think the huge Eurovision song contest), until a small folk act from Canada, Bibi (Catherine Mary Stewart, in her film debut) and Alphie (George Gilmour), arrive on the scene. When they threaten to take the spotlight from Boogalow's control, he moves quickly to bring them into the fold, and when Alphie won't sign on, he breaks them up, turning Bibi into the biggest star in the world.

A music-industry take on the Faust legend, The Apple lays its cards on the table, as the decision to sign is illustrated with the titular song-and-dance number that clearly pulls from story of Adam and Eve, but unfortunately it doesn't know what to do with the pieces once they are in place. The film goes on to depict an authoritarian regime where submission to BIM is universal, including the wearing of designated marks and mandatory exercise, but there's little drama or conflict to it, as you either fit in or get out. When Alphie takes action, it's more passive than a film plot would ask for, and the entire finale, which just kind of falls together, is utterly anticlimactic, rather silly and, if you give it some thought, pretty depressing. The Apple breaks the cardinal rule of good musicals, in that the songs should be in service to the story, and not the other way around. As a result, the musical numbers become more like a string of music videos than a cohesive film. 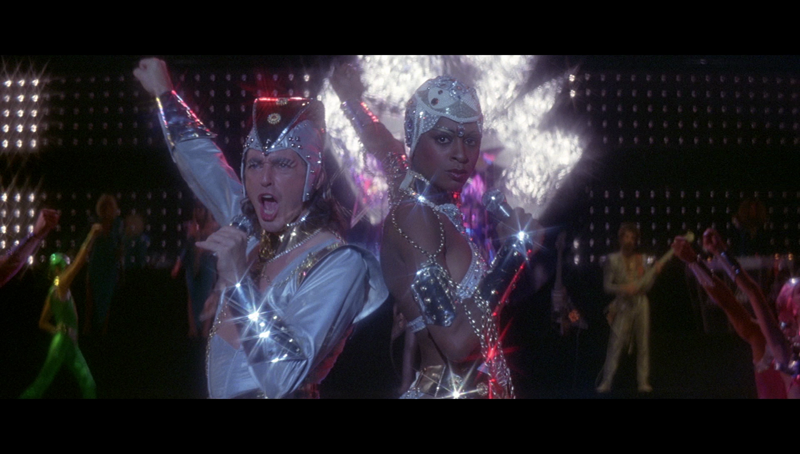 Naturally, as with any musical, the quality of those songs goes a long way toward the value of the film, and there's a surprising number of solid tunes in The Apple, or at least quite a few solid concepts for songs, as many of them peter out thanks to repetitive lyrics. But you can't ding the film for not going all out from the drop of the flag, as the film opens with the aggressive anthem "Do the BIM", setting the tone for songs like "Speed", where Stewart sings about America as a drug addict while backed by a gaggle of leather daddies; the insane "The Apple", which is paired with hell-set visuals, replete with glittering G-strings and, as the lyrics nonsensically state, "an actual, actual, actual vampire"; or "Coming for You," which offers the most obvious single entendre ever, as it scores a low-key orgy. All of these songs rise above the overall quality of the film, thought they could definitely have used another pass on the lyrics. Even the less bombastic, mainly dance-free songs, like the ballads "Universal Melody" and "Where Has Love Gone", and the problematic Caribbean-tinged "How to Be a Master" are enjoyable.

Under the direction of Golan, the film is actually shot rather well, capturing the energy of the dance sequences, but it suffers the fate of most films of its era that attempted to depict the future: 1994 looks ridiculous, with tons of silver and holographic foil on every possible surface, overly complex costumes across the board and excessive make-up on EVERYONE. Its vision of the fascist BIM society is similarly overwrought, with lots of hard-edged militaristic uniforms and symbolism, and ends up looking like Spaceballs. Part of it likely has to do with budget (Golan was well-known for keeping costs in check), so numbers like "The Apple" and "Show Business" look a bit cheap, while the use of gimmicky camera tricks and special effects just add to a dated feel (with no bigger example than the ending, which just adds to the let-down.) That the film is obviously heavily influenced by disco and came as the genre was quickly becoming a punchline (joining Xanadu and Can't Stop the Music as similarly audacious, poorly-timed films) doesn't help either. 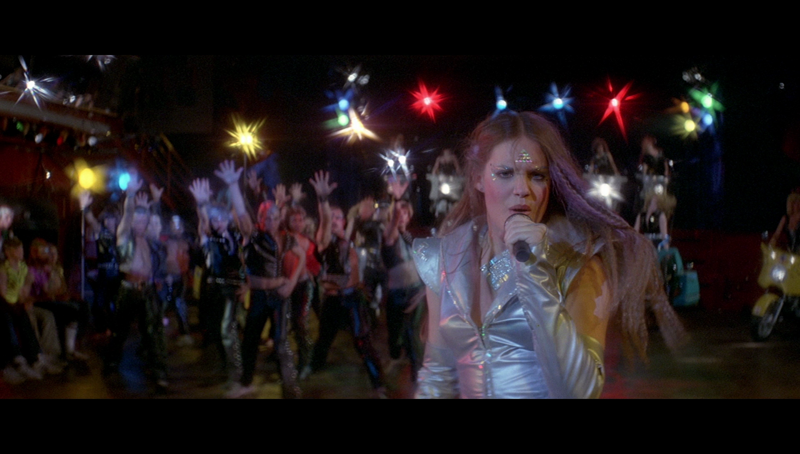 The Disc
The Apple previously was available on a long-out-of-print, essentially bare-bones DVD from MGM, but now Kino (in partnership with Scorpion Releasing) has released a one-disc Blu-ray, which arrives in a standard Blu-ray keepcase with cover art that's an unfortunate step down from MGM's version. The Blu-ray features a static menu (with the same cover art (backed by a soul-crushing loop of the song The Apple) with options to watch the film and check out the extras. There are no chapter stops, no audio options and no subtitles.

The Quality
The extra-wide 2.35:1, AVC-encoded 1080p transfer here is remarkably clean, thanks to a new HD master. Color is a bit hit or miss, but that's because of the film itself, which looks best during interior scenes, under controllable lighting scenarios. Out under dull Berlin skies, the film gets a bit gray, but otherwise hues are bright and well-saturated, no matter how out-there the design gets (and it does.) Fine detail is impressively high, w, showing off the production value, with no notable blemishes to mar the view and a stable grain to the whole affair. Digital distractions are not a concern.

A faithful 2.0 DTS-HD Master Audio track does right by the film's numerous musical numbers, providing the heft needed to get across the songs' power, while maintaining an appropriate separation between music and lyrics. Sound effects are well presented, as is dialogue, while environmental scene is limited, but easily perceived.

The Extras
A commentary gets things started, as Stewart sits down to chat about the film with Mondo Digital's Nathaniel Thompson, who acts as the interviewer, prodding Stewart for info about the film. It's not largely screen-specific, as she often talks in general about her experiences on the film, her favorite memories and the film's negative reception, all told through a very positive prism. She also talks about some moments that were cut from the film, aided by a well-researched Thompson, who adds in details about alternate cuts of the film that were shown, but these scenes aren't included on the Blu-ray.

Stewart returns for a 47:07 video interview, in which her sunny disposition shines through brightly. A lot of what's covered was also included in the commentary, so there's a lot of repetition, but her enthusiasm for telling the stories (and doing her impersonation of Golan) makes them worth a second listen. The chat also goes beyond The Apple, going down memory lane with Stewart as she steps through her filmography, making for an enjoyable featurette.

Wrapping things up is the film's theatrical trailer (2:49), which doesn't shy away from the film's musical insanity in the least. 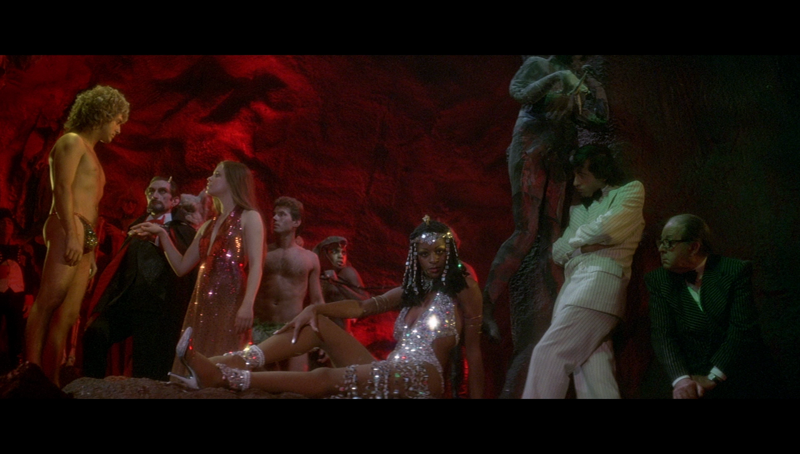 The Bottom Line
It may not be a great (or even good) movie, but The Apple is certainly an experience, one that any fan of wondrously bad cinema or over-the-top musicals will suffer gladly, luxuriating in its wacky vision of the then-future and idiosyncratic tale of good versus evil. Kino and Scorpion have given this mess of a film a quality presentation, with a few very enjoyable extras (thanks to the presence of Stewart), proving themselves once again to be true friends of ‘80s cult-movies fans. If you appreciate a filmmaker trying to do too much and attempting to punch above their weight, rather than doing the lazy, same-old thing, The Apple offers the chance to see what that brings. Francis Rizzo III is a native Long Islander, where he works in academia. In his spare time, he enjoys watching hockey, writing and spending time with his wife, daughter and puppy.Follow him on Twitter