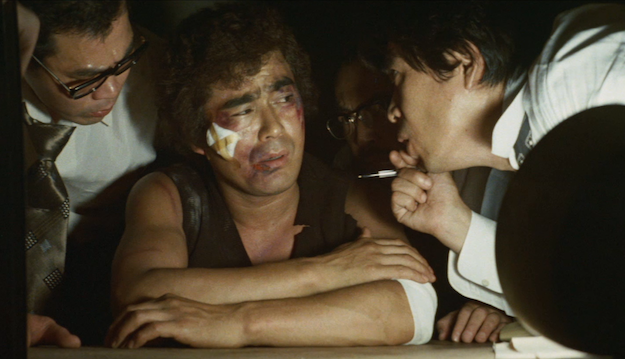 No one is going to mistake the 1977 action flick Doberman Cop for a great movie, but it is undeniably and irresistibly entertaining. Re-teaming Quentin Tarantino's long-time faves, director Kinji Fukasaku (Battles Without Honor and Humanity) and superstar Shin'ichi "Sonny" Chiba, Doberman Cop loosely adapts a gekiga (think "graphic novel" rather than "comic book") by Fist of the North Star creator Buronson into a pulpy joyride whose bumpkin he-man hero is part Dirty Harry, part Riggs from Lethal Weapon, and part Caine from the '90s version of Kung Fu.

A young prostitute is murdered and then gruesomely burned in her bed, seemingly the product of a busy serial killer. The Tokyo cops believe she is a girl named Yuna, who moved to the big city from Okinawa. Okinawa detective Joji Kano (Chiba) shows up, with sun-bleached hair, wearing a straw hat, and toting a squealing piglet on his shoulder. Not a city boy, in other words.

Kano is unconvinced that the dead girl is Yuna -- her mother, a fortune-telling shaman, told him so. He also seems skeptical that this serial killer is to blame for the death of the fake Yuna. Unsurprisingly, he begins his own unorthodox investigation, which puts him on the trail of Hidemori (Hiroki Matsukata), a gangster and would-be music mogul. Kano gets a detective's hunch that Hidemori's star attraction, the junk-addicted Miki (Janet Hatta), might just be the missing Yuna with a facelift.

Chiba is no stranger to tough guy roles, and Doberman Cop offers him plenty of opportunities to beat the stuffing out of whoever gets in his way. He also pulls off some hairy stunts, including a 40-story rope-climb down the side of a building (you can see his face for most of it -- it's actually him).

But Chiba's character is less a cowboy-cop stoic in this film than he is a frequently absurd fish out of water. He also happens to possess a sly intelligence that keeps him from revealing his physical strength or smarts before they are required. Chiba gets the chance to be quite funny in the role too, something one wouldn't typically expect. He has a handful of particularly enjoyable light-hearted scenes with Takuzô Kawatani, as a misguided small-time pimp, and In the Realm of the Senses' Eiko Matsuda as a stripper so enamored of Kano that (talk about typecasting!) she begins having sex with him on stage, within moments of their first meeting.

Much like Dirty Harry before it, Doberman Cop wraps up all its narrative threads neatly, only to end on an emotionally ambiguous note. It's a slight diversion from the norm that illustrates how the right amount of personality can go a long way toward making an otherwise typical genre story feel fresh and exciting. Fukasaku had personality by the boatload, and Doberman Cop will surely hit the spot with offbeat action aficionados.

The Blu-ray
Doberman Cop comes in a Blu-ray/DVD combo pack. The Blu-ray is playable in Regions A and B. The DVD is NTSC, but I do not know if it is region-locked. It features Arrow's usual reversible artwork, featuring an original poster image or new art from Chris Malbon. The first printing includes a color booklet, featuring essays by Patrick Macias and Tom Mes.

The Video:
A typically high bitrate (hovering in the mid-to-high 30s) from Arrow for this AVC-encoded 1080p 2.35:1 presentation. No major dirt or damage, and a well-resolved, filmic look. Tôru Nakajima's cinematography is often pretty soft and flat in a familiar '70s style, but there's still solid contrast and color saturation.

The Audio:
No major complaints from the LPCM Japanese 2.0 mono audio (with optional English subtitles). Effects and music are well supported. Dialogue is mostly clean, although it gets a little "edgy" at certain moments where characters yell.

(HD, 17:53) - A follow-up to Chiba's interview from the Wolf Guy disc. He talks about his long partnership with director Kinji Fukasaku, starting with their joint debut in 1961 and including an informal mentorship over the years that led to Chiba becoming a director with Yellow Fangs. Chiba also discusses the implications of his character being from Okinawa, something that wasn't in the original comics.

Final Thoughts:
Arrow does right by genre fans once again, offering a largely ignored gem from one Japan's great pulp auteurs. You may not learn anything watching Doberman Cop, but you'll have a good time not learning it. Highly Recommended.