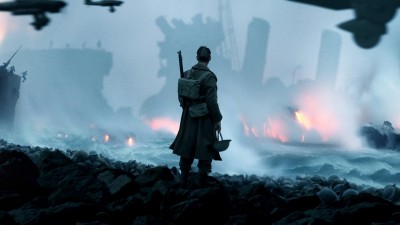 "All we did was survive"

When it comes to war films, we're used to near-mythological depictions of heroism and sacrifice. Ideologically, we would all like to fantasize about being brave and heroic fighters if we're put in the middle of a battlefield. But once the reality of the situation kicks in, once bombs start dropping around us and bullets whiz by an inch from our faces, we might realize that the act of survival itself might be enough heroism, if we're able to leave behind the romanticized ideal of warfare. Christopher Nolan's new masterpiece Dunkirk is a breathtaking and nerve-wracking experience that never lets go of our nerves from the first frame to the last, putting us face to face with what we might have to do to survive a seemingly unwinnable war.

Nolan's impeccably edited 106-minute "war simulation" isn't interested one bit in the politics, ideologies, and similar macrocosmic details of World War II, and even the Battle of Dunkirk specifically. Its only goal is to put the audience through an intimately personal experience of survival through three distinct battlefields (Ground, air, and sea). Remember Saving Private Ryan's kinetic and unfiltered depiction of warfare during the first act? Take those fifteen minutes, expand them into a relentlessly gripping feature, and you might begin to get idea of how engaging, tense, and ultimately breathtaking Dunkirk is as a cinematic experience.

Nolan's critics usually harp on his extended use of exposition. Since I admire him for taking the blockbuster filmmaking mold, usually reserved for intellectually vapid popcorn entertainment, and successfully implementing complex, high-concept ideas into entertaining genre fare, I never minded the trademark Nolan exposition. How else are you supposed to communicate the cosmically complex ideas found in Inception and Interstellar? He's either scorned for "explaining too much", or "being too complicated". Sometimes you just can't win.

It's as if Nolan had a bone to pick with these critics, so he presents a not so subtle middle finger to them with Dunkirk. He proves that he can construct a wholly satisfying visual experience with as little dialogue and exposition as possible. It'll sound like an obtuse comparison on the surface, but Dunkirk can almost be seen as the war drama counterpart to Mad Max: Fury Road. From the first second on, both films focus on visually impressive kinetic action as a never-ending through line. Instead of a traditional first act that calmly develops the characters and the main conflict, both films rely on quick dialogue and visual moments during the rare, short respites between heart-pounding action sequences in order to take care of character development and exposition.

Fully aware of how much he has to communicate during such a short time, Nolan comes up with images and dialogue that pack the punch of ten expository scenes. A solemn moment on the beach, as the soldiers await their deaths, bluntly shows us the troops' state of mind in a manner of seconds. A brief piece of dialogue between two characters on a rescue boat give us all we need to ponder about the nature of heroism during battle. A quick decision made by a character on the same boat showcases the heartbreaking sacrifice that many had, and still have to, endure during such devastating conflict. The film's unrelentingly kinetic structure lulls us into thinking we're just in for a sensationalistic audiovisual experience, which doesn't prepare us for the emotional gut punch that the third act has in store.

Since the actual soldiers at Dunkirk were fairly inexperienced, Nolan used equally inexperienced actors to fill those roles, hence the inclusion of a pop star like Harry Stiles. This gamble works efficiently, since Nolan manages to get visceral and raw reactions from his soldiers. This inexperienced cast is expertly propped up by seasoned veterans like Kenneth Branagh, Mark Rylance, and Tom Hardy's eyeballs (Why is Nolan obsessed with covering this dude's face?). Hans Zimmer's gripping score, based almost entirely on a repetition of tones that expertly raises tension, and the immersive sound mixing are just two reasons for you to check out Dunkirk on as big of a screen as possible. And that's before I even mention the epic 65mm cinematography.