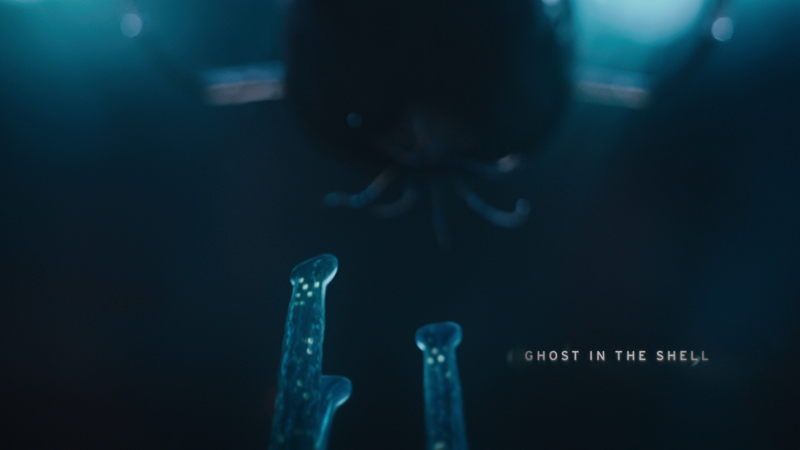 
The Movie
Ghost in the Shell was up against it before a single frame was shot. Taking on a beloved source like Masamune Shirow's classic manga, which had already been adapted into what's considered one of the greatest anime films of all time by Mamoru Oshii, meant battling some severe expectations and prejudices from the franchise's fervent fan base. Add in the accusations of whitewashing due to the casting of Scarlett Johansson as Major, the film's lead character, and the film faced plenty of critics who would be hard to win over, and production hadn't even started yet.

When the film actually was complete, under the guidance of Snow White and the Huntsman director Rupert Sanders, things wouldn't get much better.

Blending elements from the various anime adaptations and adding in some new flourishes, this new Ghost in the Shell follows Major Mira Killian (Johansson) part of Section 9, an elite counter terrorism organization. Major is the titular "Ghost", having had her brain placed into a synthetic body by the massive corporation Hanka, which gives her unique abilities to battle threats, including a visually-impressive cloaking capability, along with identity questions about who she is, as she begins to experience curious glitches that seem like memories. When her team attempts to track down the cyber terrorist Kuze, who has been killing Hanka scientists, the questions mount for Major and she starts to learn some uncomfortable truths about her own history.

Some of the themes key to earlier incarnations of Ghost in the Shell, like the ideas of identity and self and the value of humanity in a society that has embraced personal technological enhancement, are carried over in this version (though the exploration of sexuality and gender are all but ignored.) The film's method of tackling these concepts is unfortunately very surface and obvious, with everything being addressed in very explicit dialogue that hammers you over the head rather than suggest or imply (starting with a text prologue that establishes everything you need to know.) There is little subtlety in Major's world, as everyone says what they are thinking, which is handy for exposition, but often makes for awkward dialogue. 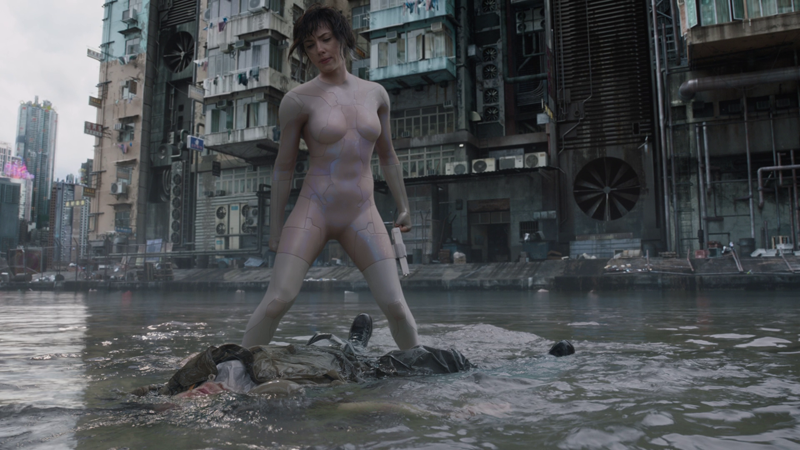 The lack of subtlety carries over into the film's visuals, which is a positive, as the film is definitely a spectacle, full of gunfights and hand-to-hand battles, all set in a Japan that's like an updated take on Blade Runner's Los Angeles, loaded with massive hologram advertisements, plenty of glass and an ever-present layer of griminess. From Major's skin-tight thermoptic suit to the various cybernetic enhancements to the striking geisha-bots, the film has style to spare in its production design, taking plenty of cues from its predecessors--including some frame-specific homages--while also striking out on its own, even if trafficking in a world like this will earn comparisons to the genre's classics.

Somehow, despite all the visual flair, the film lacks excitement, slowing down greatly when punches and bullets aren't flying, and even mid-battle there's not much new ground being broken. The film's climactic battle sequence, which should pay off everything up to that point, is perfunctory at best, in part because one of the combatants is poorly established, but mainly because the stakes are pretty low, the result of the film's set-up. Some of the characters are so lightly established that, upon watching the extras, I learned there are characters in the film I didn't even remember meeting.

As Major, Johansson is her usual solid self, excellent in action and giving the part the right gravitas, even if the film limits her character work to essentially one track. The movie actually manages to deal with the issue of whitewashing pretty well through the plot (which connects to the general aesthetics of anime) and Johansson is certainly not attempting to play a Japanese person, though, in the context of her character, that's an issue unto itself. As with most big-budget films these days, the cast is a multi-cultural mix, with A Game of Thrones's Pilou Asbæk serving as an excellent visual stand-in of the massive Batou, "Beat" Takeshi nailing the part of the team's veteran leader and Juliette Binoche lending her rep to the proceedings. But if anyone deserves MVP consideration here besides ScarJo, it's Michael Pitt, who is terrific in a key role that is as memorable as anything in the film, powered both by his performance and some well-employed technology. If everything else in the film managed a similar balance (an irony considering the film's themes) the film could have been so much more than a visual blowout. 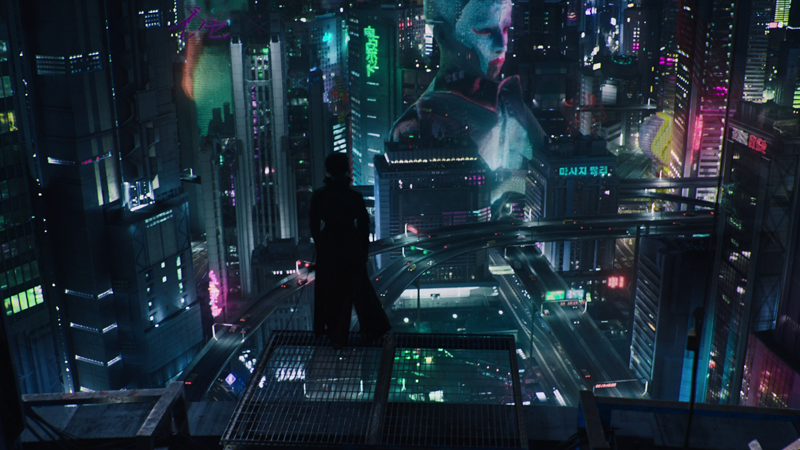 The Quality
The 3D version of Ghost in the Shell doesn't feature those familiar in-your-face demonstrations that the format once thrived on, instead displaying a mature confidence in utilizing the added dimension to add effective depth to the 1.78:1, AVC-encoded 1080p transfer, particularly when it comes to the massive holographic adverts and the sweeping camera paths through the city. There are some occasional neat tricks utilizing the 3D, like a spray of broken glass, but for the most part the depth acts the same way as good CGI--working best when you don't notice it. The level of fine detail is excellent throughout, showing off the terrific production design, though contrast comes off as a bit light and color is a touch dull, with the hues somewhat affected by stylistic choices. There are slight issues with some digital distractions (mainly some aliasing on hard edges) but overall it's a quality delivery of the visuals that makes fine use of an extra dimension.

The Dolby Atmos track (presenting as a Dolby TrueHD 7.1 track in the absence of Atmos) doesn't really deliver the bombast you might expect from a film like Ghost in the Shell. Yes, the surrounds get good utilization in depicting the gunplay and enveloping chaos of the action sequences, while the bass gets nice and heavy in establishing the menacing forces Major and company face, creating the nightclub scene's atmosphere and building the feel of the film's cyber domain. The score by Lorne Balfe and Clint Mansell is a hefty presence in the mix, while dialogue is clear and crisp, sound effects get some impressive discreet placement to go along with very clean panning. Yet, as it is with the 3D, the best part may be one of the smaller elements, namely the effect on Pitt's voice, which sounds so wonderfully disturbing.

The Extras
Things get started with a solid half-hour behind-the-scenes featurette, Hard-Wired Humanity: Making Ghost in the Shell, which is full of interviews, set-footage and concept art, as it explores all the key elements of the film, including the special effects, design work and the influence of the original anime, with Oshii even offering some thought some thoughts on the latest version. Produced by the great Laurent Bouzereau, it offers plenty of looks at the special effects process, probably the best part of the whole package.

The 11:29 "Section 9: Cyber Defenders" offers a way to meet the characters who make up Major's team through interviews with the performers, which served to point out that some of these people were actually in the film, which in some cases came as a surprise. As they discuss their characters' traits, you can try to see if you remember the characters.

The final extra, "Man & Machine: The Ghost Philosophy" (10:36), focuses on the film's themes, through interviews with the cast and crew, as they talk about the ideas explored in the film and the concepts that inspired it. 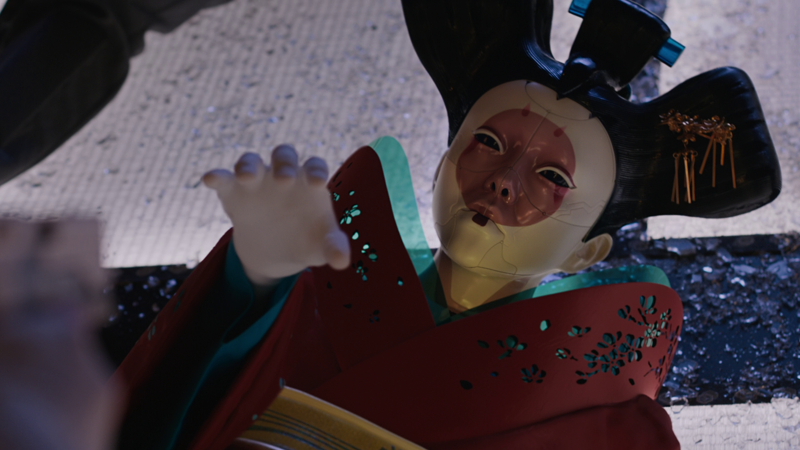 The Bottom Line
There's a lot of interesting elements of Ghost in the Shell, and fans of the previous versions can likely appreciate this new, somewhat meta vision, but everything is so surface that it feels like it doesn't trust the audience to understand what's happening. That said, there are plenty of interesting visuals to enjoy, and Johansson and Pitt are always worth watching at work. The 3D experience puts the added depth to good use in enhancing the film, and the quality and extras make for a quality presentation. Keep your expectations in check and you could get some enjoyment here, but the first anime is a better bet. Francis Rizzo III is a native Long Islander, where he works in academia. In his spare time, he enjoys watching hockey, writing and spending time with his wife, daughter and puppy.Follow him on Twitter