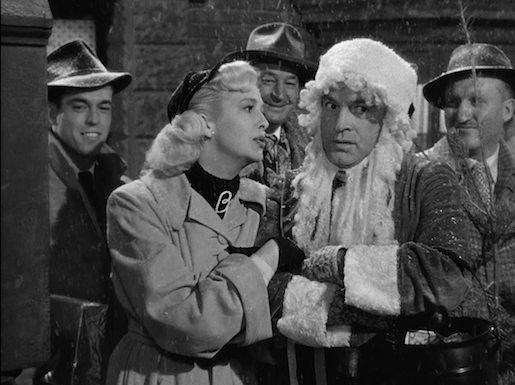 It's Christmas in July, as Kino Lorber continues doling out its summer batch of Bob Hope Blu-rays. The Lemon Drop Kid (1951) is a yuletide fave that lightly mixes some holiday sap into a Damon Runyon gangster farce.

Hope is the titular Kid, so named for the citrus flavored sweets he's always popping in his mouth. A low-level con man, the Kid gets in hot water after giving a bad tip on a horse to a gangster's moll. That gangster, Moose Moran (Fred Clark), ends up losing $10,000 he would have won on that bet. Moose semi-benevolently gives the Kid until Christmas Day to scrape together the dough, so he heads out to New York in search of a new stream of revenue. Seeing the streets lined with money-collecting Santa Clauses, he decides to concoct a fake charity for destitute old ladies and corrals a bunch of underworld characters (including I Love Lucy's WIlliam Frawley, They Live by Night's Jay C. Flippen, and Plan 9 from Outer Space's hulking Tor Johnson) to be his suspect Santas.

Hope is firmly in his element as the self-interested, fast-talking Kid. He is a font of snappy comebacks -- many of which inspire giggles based more on their speed than their cleverness. Hope also delivers on the physical comedy front. I was doubled over watching Hope primp and prep in the mirror, lightly brushing his teeth and dousing his suit in baby powder, moments before he tries to smooth things over with his beleaguered gal, Brainy Baxter (Marilyn Maxwell).

Maxwell has a slightly tricky role, but she pulls it off deftly. She has to be wise enough not to always take the Lemon Drop Kid at his word, but she also has to love him unconditionally so that we in the audience will continue to like him. After all, what we know, but that her character doesn't, is that his rest home for "old dolls" is a fake: all the unwitting biddies that the Kid has gathered together for temporary legitimacy will be dumped on their ears come Boxing Day. On the other hand, Hope has such a warm rapport with the ladies, especially Jane Darwell as the wife of an imprisoned safecracker, that we feel slightly assured that the Kid will eventually be dissuaded from turning into a complete heel.

Lloyd Nolan (who will always be Michael Shayne to me, no matter how many other roles I've seem him in) is low-key but effective as a high-toned wiseguy, looking to horn in on the Kid's Santa racket -- and his lady.

This film is noted as being the uncredited live-action debut of director Frank Tashlin (Will Success Spoil Rock Hunter, Susan Slept Here), whom Bob Hope brought in to punch up initial director Sidney Lanfield's original cut of the film. Lanfield has a long comedy track record, so there's not necessarily a clear delineation of where one director's work stops and the other's begins, but one can make some guesses. The sequence where Hope mechanically steals the garments from a matronly window-display mannequin, article by article, has the flavor of a Tashlin gag. Tashlin is confirmed to be responsible for the film's signature musical number, which effectively launched the Jay Livingston-Ray Evans song "Silver Bells" to instant-classic status. Brainy and the Kid sing and stroll the city streets, arm in arm, spreading Christmas cheer (and a few dated ethnic jokes) as they go.

The Lemon Drop Kid, like the title candy, offers some good old-fashioned fun. And no sugar crash afterward. 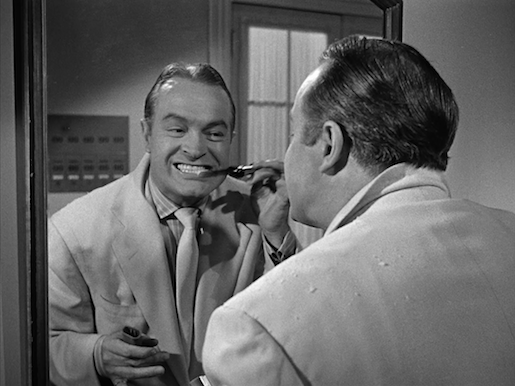 The Video:
In his review of the Shout! Factory DVD, DVD Talk's Stuart Galbraith IV theorizes that the master used might be the same as the 2006 HD DVD. I'm going to guess that that same 11-year-old master is being used here. Overall, the picture is satisfyingly crisp, with a nuanced range of contrast, and negligible dirt and speckles. The disc has a healthy bitrate too, hovering in the mid-to-high 30s (MBps). But there are sporadic moments of digital sharpening and smoothing that seem more common to the mid-'00s approach to HD transfers. It's not wildly distracting -- the actors never look like wax figures -- and I bet if you don't sit too close to your set (I know I should have listened to my parents), you probably won't even notice.

The Audio:
No complaints from the DTS-HD MA 2.0 mono audio. Dialogue is clean and clear. Music is well supported, especially Hope and Maxwell's songs. No distracting pops or hiss. No subtitles.

Special Features:
Just a montage of clips from Kino's recent Bob Hope releases: My Favorite Brunette, Road to Rio, The Lemon Drop Kid (yep, this film too), Road to Bali, and Son of Paleface.

Final Thoughts:
A perennial Bob Hope favorite finally gets a Blu-ray upgrade. It's exactly the right mix of charming, silly, and sweet, and well worth adding to your collection. Highly Recommended. 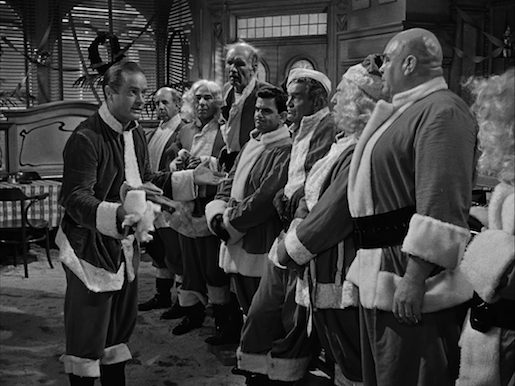