Where the Boys Are

1960's Where the Boys Are is considered the first of the "beach party" movie genre of that decade. Although based on a novel, the plot is fairly simple: a group of college girls from Illinois heads to Fort Lauderdale for "Easter Vacation" where thousands of other college students traditionally visit during that week- these days we just say they go to "party" but back then they had to at least make it sound a bit more sophisticated. While later movies (including an awful 1984 film using the same title) have usually portrayed this as non-stop sex, drinking and rock and roll, in 1960 this movie had to restrain that a bit as well. Looking at it today, it's quite a time capsule. 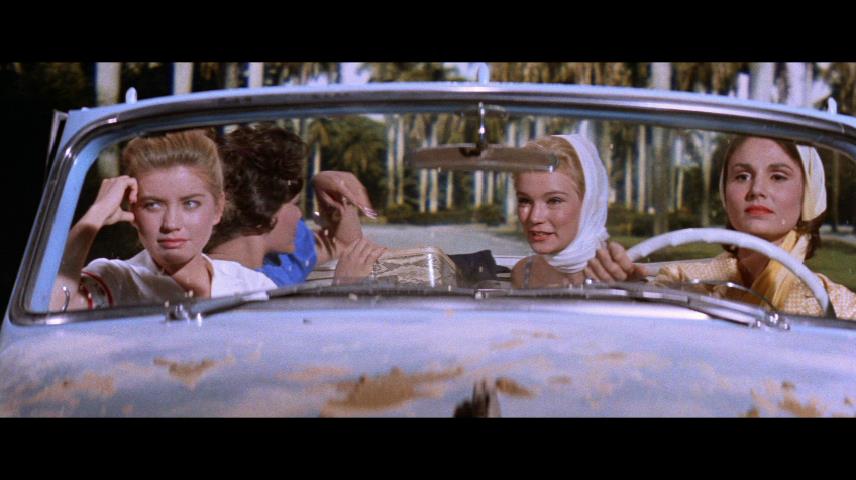 The four central characters are Tuggle (Paula Prentiss), Merritt (Dolores Hart), Angie (singer Connie Francis) and Melanie (Yvette Mimieux). A scene that dates this film right away is at the college where Merritt is taking a class titled Courtship and Marriage, for female students only. Merritt shakes things up a bit when she speaks up saying that the traditional values being taught there are becoming old-fashioned and that people ought to get more "emotionally involved", code for having sex before marriage. As the girls drive in a beat-up car to Florida, they discuss the possibilities of meeting those of the opposite sex there- but as for potential partners for life, not just a "hook-up" as they call it today. Sure enough, each of them gets a love interest for the story with quick mutual attractions, the first being "TV" (Jim Hutton), named as such because he's planning to work in television after graduating although he never discusses exactly what part of it- hopefully he didn't aspire to start a fourth network 26 years later. He's a bit of a schemer but mostly good-natured; they find him on the side of the road outside Fort Lauderdale and give him a lift. Once there, Merritt meets Ryder (George Hamilton), a rich ivy-leaguer who quickly lures her to his family's big home and yacht- from there he phones the resident chef to bring them dinner and finds it's already on the way. Melanie implicitly sleeps with Yale student Franklin early on and continues to pine for him even though he seems to forget she exists by the next day. Angie is supposed to be the least attractive of the four, although Connie Francis certainly doesn't appear that way, and has the hardest time finding someone but eventually falls for Basil (Frank Gorshin), an eccentric member of a band that lands in Fort Lauderdale to entertain the crowds. If this were the 80s they would most likely be a heavy metal band, but here they play- get this- dialectic jazz, and the kids dig it! Their music definitely sounds better than most of what passes for ‘pop music' these days.

The four girls share a motel room which seems to have a new occupant added each night as they take in other girls who spent all their money on the trip and had none left for their own room once they got there. Although they spend some time on the beach, they seem to pursue their love interests pretty quickly, getting a bit attached considering they had just met them there. (This seems to be common in these types of movies.) While we don't see them jump into bed with each other since they just didn't do that in movies back then, some of the guys put very subtle moves on the ladies- TV asks Tuggle if she's a "good girl" and then seems quite disappointed when she answers "yes." The whole affair is mostly light-hearted, with a musical highlight of Angie spontaneously providing vocals for Basil's band, but things take a surprisingly dark turn towards the end.

The young cast is said to be the last of Hollywood's traditional star system, where talent was hired to work exclusively for one movie studio. Paula Prentiss and Jim Hutton impressed enough people that they were paired together in a few other films after this one. Dolores Hart had previously starred with Elvis Presley in King Creole but became a nun in 1963. 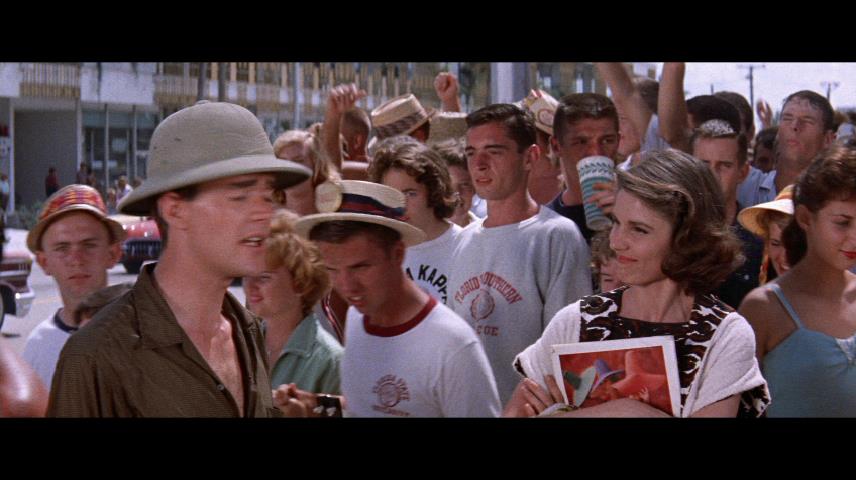 This CinemaScope film is presented in its proper ratio (2.35) and the transfer is very clean, looking like a good film print and not cleaned up excessively. Some scenes appear a bit dark but intentionally so. Focus is a bit soft in a few scenes and the movie also exhibits telltale softness when there's any sort of scene transition. Details are clear enough to see the folds in some of the studio backdrops, such as in the recreation of the outside of the motel (while the cast and crew did travel to Fort Lauderdale, a few shots were still done at MGM's Hollywood studio.) I'd only previous seen this movie on TV during an afternoon movie (about the last years that those were still common) and remember the panning and scanning being quite annoying, so seeing it here properly is quite refreshing. 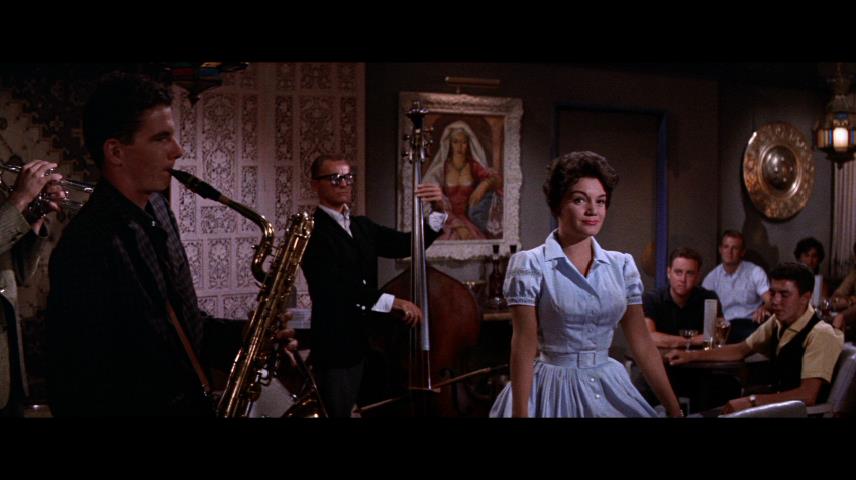 The mono audio is presented here in 2-channel DTS Master Audio; Warner usually encodes their mono track in 1-channel which I prefer but the sound still stays properly centered with surround decoding. The quality is very clean for a movie of this vintage, with very clear dialogue and the jazz music performances really shining albeit in mono. Hearing-impaired subtitles are included, which curiously do not show song lyrics when they're sung. 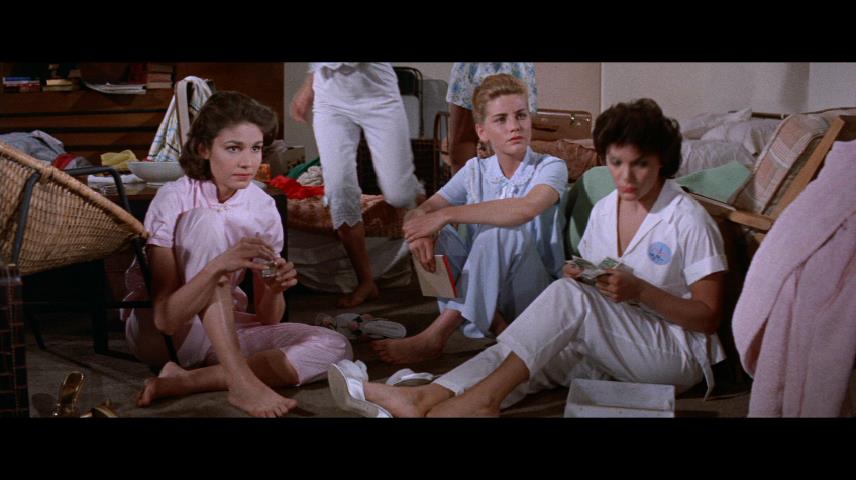 The extras on this Warner Archive release are ported over from the 2003 DVD, released in the format's heyday. A commentary track with Paula Prentiss is entertaining although she doesn't have a whole lot to say and goes silent for a few stretches. It's interesting mainly because she hadn't seemed to have seen the movie in a while, and spontaneously remembers a few things as they appear. A short piece in 4x3 standard-def produced by New Wave Entertainment brings in the female leads to reminisce a bit more, with Connie Francis telling how her go-to songwriters Neil Sedaka and Pete Rugolo wrote two potential theme songs for the movie and the one they liked the least was chosen. Also in standard-def is a black and white newsreel showing the movie's premiere in Fort Lauderdale, and the theatrical trailer is included in hi-def. 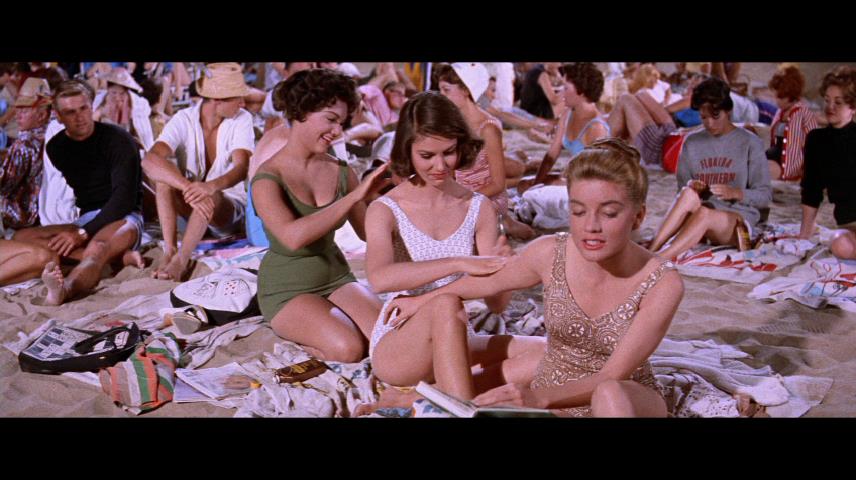 Where the Boys Are is mostly lighthearted fun (though with a bit of a stunner) and an early sign of the changing social values of the 1960s, which would be quite different by the end of the decade. (I initially watched this back to back with Where the Boys Are ‘84, and it was quite a jolt to see how quickly things had changed by then- now that movie is older than the original was then although 1984 still feels like yesterday to me!) Warner's Blu-Ray presentation is top-notch without looking overdone, and will please old and new fans of the movie.