Shout Factory // Unrated // July 18, 2017
List Price: $79.97 [Buy now and save at Amazon]
Review by Stuart Galbraith IV | posted August 2, 2017 | E-mail the Author
I'd never seen an episode of T.J. Hooker, the 1982-86 police action-melodrama, until preparing this review. But when Shout! Factory announced The Complete Series I decided to give it a go, mainly because of the actor playing the title role, William Shatner.

I'd long admired Shatner as an actor and for his amazing longevity. Coming from the Canadian theater scene, he first made a name for himself as one of the main go-to guys on American television of the late-1950s through mid-1960s, on shows like Studio One, The Naked City, Twilight Zone and many others. He was not only one of the finest actors on television at that time, he was roguishly handsome to boot, and a big break in movies and/or TV seemed inevitable.

It was Star Trek, of course, that made him truly famous, but like many ‘60s TV leads, after his series was cancelled Shatner struggled for a time. In later years he did excellent work in the series Boston Legal (2004-2008), and exhibited a fine sense of comedy in TV commercials, public service ads, in sitcoms and reality shows. He also produced and/or directed a number of documentaries about Star Trek that have been unexpectedly probing and intelligent.

T.J. Hooker, concurrent with Shatner's Star Trek movies of the 1980s, isn't much, alas. Created by Rick Husky (Cade's County, S.W.A.T) and produced by (Aaron) Spelling-(Leonard) Goldberg Productions, a division of Columbia Pictures Television, T.J. Hooker is strictly by the numbers, with generic plots and characters. Though shot on 35mm film and boasting pretty good production values for the period, the writing is notably weak, rife as it is with every cop show cliché imaginable.

Watching as many episodes as possible for the purposes of this review, I got so bored that to amuse myself I began anticipating each next line of dialogue (my guesses were usually right). The dialogue is less Hill Street Blues than something out of a minor police melodrama of the 1950s. Indeed, seen today Hooker is more dated and less realistic than the 1950s Dragnet and Highway Patrol. Where Jack Webb's Dragnet and Adam-12 offered LAPD verisimilitude, Hooker goes for more hard-boiled approach, but instead comes off as pretty silly.

None of this would have mattered much had Shatner, as one might reasonably have expected, pressed the show's producers to add more depth and realism to the main characters or, conversely, opted to give the kind of full-on, theatrical-style performances he's famous for. (Shatner, however, is very rarely hammy and over-the-top unless the situation calls for it, despite many wrongly assuming he's capable of nothing else.)

In the end, Shatner's title character is competently realized, a character pretty far removed from Capt. Kirk. He's just fine, but the writing generally gives him little from which to build a flesh-and-blood believable character. 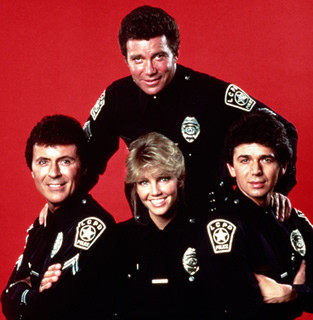 Originally conceived as a re-working of The Rookies, presumably with Shatner pegged for the paternal, Gerald S. O'Laughlin part, instead the series was reworked to focus primarily around his character. T.J. Hooker is a 15-year veteran, a former plainclothes Det. Sgt. with the LCPD who returns to duty as a uniformed beat cop after his partner is killed and Hooker wounded.

Based at the Police Academy Precinct (played mostly by administrative buildings on the Warner Bros. Burbank lot) he takes as a partner lanky rookie Vince Romano (Adrian Zmed). Despite their age differences they become inseparable, of course. Much of the banter between them involves Romano ribbing Hooker for the disorganized state of his personal life (crummy car, eventually living out of a motel after his wife divorces him, etc.). By today's standards, Hooker is a quite conservative, a "law and order" cop driven to rid his hometown's street of various "scum."

During the second season, Officer Stacey Sheridan (Heather Locklear), the daughter of Hooker's boss, Capt. Sheridan (Richard Herd), and eventual partner Officer Jim Corrigan (James Darren), were added. They stayed with the series until its cancellation, while Zmed left for the fifth and final season.

What's perhaps most surprising about T.J. Hooker is just how fit and physically active Shatner is on the show. Fifty years old when the series began, he's actually in far better shape than he ever was on the original Star Trek. In a tight-fitting black police uniform for most of the series, any weight gain would have been instantly apparent, but at least until the last season or so (when Hooker was more often in plainclothes) he kept it off and pulls off the same intense level of running, jumping, and fighting that he did on Star Trek two decades before. (Now 86, Shatner looks like a man of 70.) Ironically, Leonard Nimoy guest stars in one episode, and yet that actor, a few days younger than Shatner and 51 at the time, looks at least 15 years older.

T.J. Hooker: The Complete Series looks great on DVD. The five seasons, 91 hour-slotted episodes in all, are contained in four standard DVD cases. (Season 1 consisted of just the pilot TV-movie and four regular episodes.) The color is strong and the image is bright and sharp with little sign of age-related wear. The Dolby Digital mono is surprisingly robust on these Region 1 discs.

For its last season the series moved from ABC's primetime schedule to CBS late night, when that network offered new programming for a few seasons. Apparently there's been some confusion over the running times of these episodes, but Shout! seems to have done its homework, as they appear as originally produced, including the expanded episode "Blood Sport." No Extra Features.

Watchable but not especially good, either, despite William Shatner as its star, T.J. Hooker is just barely passable as comfort food-type entertainment, though Shout! Factory did a fine job with this release. For fans, it's Recommended.