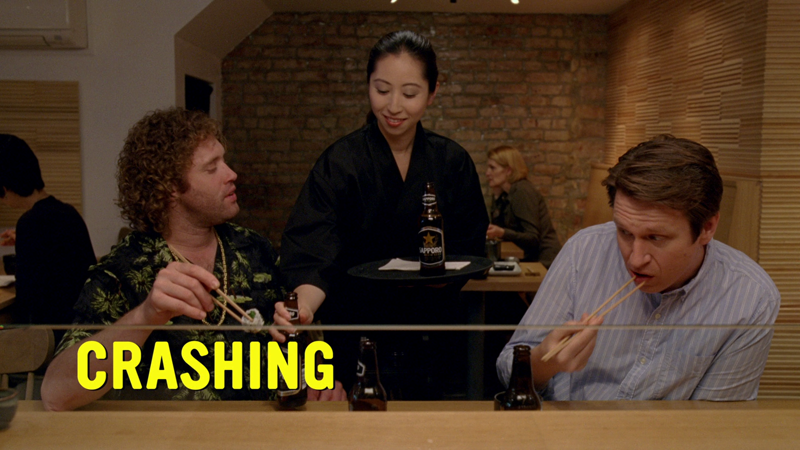 
The Show
Judd Apatow likes to deliver pain unto people who make others laugh. At least, that's what it seems like after watching two seasons of his Netflix show Love and now the first season of his HBO series Crashing. Putting hilarious people into dark situations also seems to be a hobby of his, going all the way back to Jim Carrey in The Cable Guy, as he puts one of the sunniest guys going--comedian Pete Holmes--through the wringer in this show, as his life collapses around him in the pursuit of stand-up comedy success. There are a few laughs to be found here and there, mainly during stand-up routines, but for the most part, this show takes comedy seriously.

In Crashing (in no way similar to the recent British show of the same name), Pete, playing a fictionalized version of himself, learns that his wife Jess (Lauren Lapkus) has been cheating on him with a hippie art teacher named Leif (George Basil), in part motivated by her frustration with having to support his attempts to make it as a stand-up comic in New York City. It's a miserable slog that only costs her money, as he commuted into the city from their suburban life to do free open-mic nights and tries to ingratiate himself into the scene, to limited success due to his naive and awkward personality. Now, having lost his wife and their home, and having no job and no money, he relies on the kindness of semi-strangers for a couch to sleep on, including comics Artie Lange, T.J. Miller and Sarah Silverman.

As part of his sleeping arrangements, he's drawn into a number of odd situations, like driving Lange to Albany for a gig in order to keep him sober or having Miller accompany him to his ex-wife's yard sale in order to reclaim his stuff. Mixed in amongst these misadventures there's some dumb luck and small successes, allowing Pete to grow a bit as a comic, but who he is at his core always manages to hold him back. Though the show is serial, with each episode picking up on Pete's journey where the previous one ended, there's not really a plot that runs through the first season thanks to Pete's ambling. It's more of a character arc that actually revolves around Jess, with Pete held in its sway--a perfectly natural occurrence for a character like him. 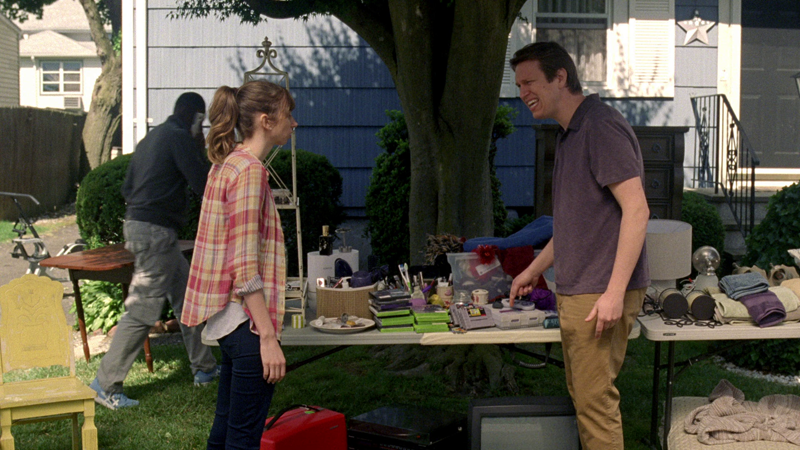 Holmes is perfect in the role, bringing the right look and feel to a nice guy lost in the world who just wants to do the right thing, but at the same time being directionless and somewhat self-absorbed. The thing about Crashing is the distinct lack of heroes to side with (with the possible exception of Silverman), as there are plenty of likable, understandable characters, who take completely unacceptable actions. Miller and Lange are both tops of that list, as both are pretty reprehensible, but there's an odd justification that you can accept in the world of the show, and both come off as good guys because of it (with Lange getting a real chance to impress.) Similarly, Lapkus (further showing her range here) could have been the villain of the show for breaking Pete's heart, but she's just as bad off as anyone else. The series is a definite showcase for some fine acting.

Though the show is set in the world of stand-up, and thus features plenty of the brutal verbal sparring that happens there, there's not a great deal of actual comedy. We do hear bits of sets by Holmes, Miller, Aparna Nancherla, Hannibal Buress and others, but they are more of a mood setter or plot device, rather than a featured element of the show. If anything, they are far more effective in establishing the loneliness and desperation of a stand-up just starting out, trying to wring laughs out of an indifferent, if not hostile audience. It's the perfect setting for a character like Pete, who is trying to please, but no one really want to hear it. 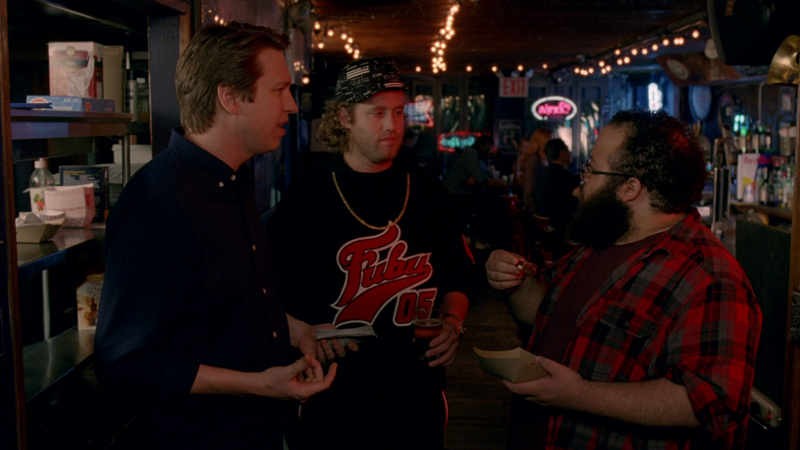 The Discs
The eight episodes in Crashing's first season are spread over two Blu-ray discs, held in a standard-width dual-hub Blu-ray keepcase with a two-sided cover (featuring content info on the inside) and a matte-finish slipcover that repeats the cover art. The discs feature static menus offering options to watch the episodes (all or one at a time), adjust languages and check out the extras. Audio options include English DTS-HD Master Audio 5.1, French DTS Digital Surround 5.1 and Spanish DTS Digital Surround 2.0, while subtitles are available in English SDH, French, Spanish, Danish, Finnish, Norwegian and Swedish.

The Quality
Crashing arrives with 1.78:1, 1080p AVC-encoded transfers in 1.78:1 that have a very natural look, with quality fine detail and appropriate color, making for a very enjoyable view. At several points, it was striking how the show managed to make Manhattan look like a small town, focusing on brick and earth tones, with tight angles that kept the focus front and center rather than on the big buildings and skylines, while the suburban scenes are bright and colorful (with the final episode looking almost idyllic.) Black levels are good, if lacking in definition in some of the grimier locales (like the small bars and clubs Pete works), but overall nothing felt problematic, with a crisp image that showed off focus changes and no notable concerns about digital distractions.

Considering the settings and tone of the show, the DTS-HD Master Audio 5.1 tracks on these episodes deliver just what you'd expect, with clean dialogue that maintains proper separation from the rest of the aural elements, while the surrounds handle atmospheric effects according to the environment. Though there's not a lot of bombast to the show, more subtle scene-setting is accomplished via the sound (think audience reaction and city background), while the occasional well-placed off-screen audio gets proper placement in the sides and rear. A well-done presentation for its purpose.

The Extras
Extras start off with four short segments called "Guest Star Fan Club", which run a combined 9:05. Holmes talks about the famous guest stars on the series--Lange, Miller, Buress and Silverman--and what it was like working with them, along with what they brought to the show, like how Buress added some next-generation credibility to the proceedings.

The 1:48 "About Crashing" offers up an overview of the show, discussing the guest stars and improv that went into the series, while offering up some behind-the-scenes footage. More promotional in nature than anything else.

"The Art of Crashing" (2:38) features Holmes and company talking about the life of a comic just starting out and how the show depicts their own personal experiences sleeping on couches and the desperation of getting gigs. For anyone not into the scene, this helps establish the show's stranger-than-fiction feel.

"Comedy Extras" are extended scenes of stand-up, from Miller (1:09) and Nancherla and Holmes (4:33), though there's not a great deal added to any of the three acts. Holmes' is the most extended, but wouldn't have made sense where it fell in the show.

In a beautiful bit of corporate synergy that actually benefits the viewer, HBO has included Holmes' most recent HBO comedy special, Faces and Sounds (57:02) as a bonus feature. On stage at the Vic in Chicago, Holmes muses about a variety of topics, including trumpets, Enrique Iglesias, language and vaginas in his own trademark goofy way, including discussing the ridiculous way saying "edited it" sounds (a personal concern of mine for well over a decade.) It's a solid set, maybe not as funny as Nice Try, The Devil, but well worth a watch.

Also included is a code for a digital copy of the first season of Crashing. 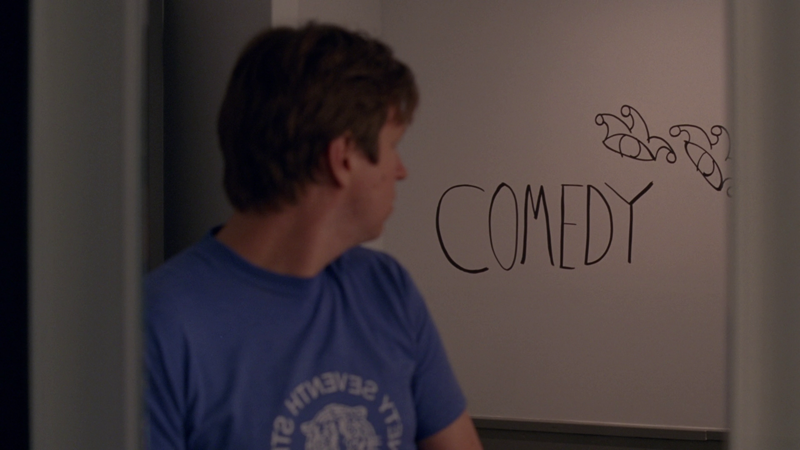 The Bottom Line
Fans of Holmes might come into Crashing expecting some hilarity, since it's set in the world of stand-up and features a host of funny folk, like Lapkus, Miller, Lange, Silverman and Buress, but it's far more of a dramedy than a comedy in exploring the cost of chasing your dreams (though there are some laughs along the way.) This set brings home the first season in fine shape, and throws in a decent selection of extras, buoyed by the welcome inclusion of Holmes' latest stand-up show. If you like Holmes' you're certain to enjoy the show, just understand, this is more like You Made it Weird than his other work. Francis Rizzo III is a native Long Islander, where he works in academia. In his spare time, he enjoys watching hockey, writing and spending time with his wife, daughter and puppy.Follow him on Twitter