With a title like Vampire Ecstasy, one can easily guess what Joe Sarno's cult sexploitation gem is going to be about and feature. Expectations are pretty much set in stone in a name that immediately invokes sensuality, and in Sarno's first foray into the horror genre, the movie does not disappoint in this respect. When two young women, Monika (Ulrike Butz) and Helga (Marie Forså), arrive at a creepy castle to claim an inheritance, their innocence is soon corrupted by a coven of witches preparing to reincarnate their vampire leader. With each night the two spend wandering the stone hallways, viewers witness this small band of spell casters, led by the dispassionate yet charismatic Wanda (Nadia Henkowa), partake in a series of carnal pleasures and bizarre, erotic rituals. In a short span of time, as both women learn more about their ancestral home, a seemingly repressed Helga begins discovering her kinkier side, particularly with complete stranger Peter Malenkow (Nico Wolferstetter), younger brother of inhibited vampire expert Julia (Anke Syring).

Strangely, during all this debauchery and celebration of the flesh, Sarno pushes Butz's character to the side, becoming more of a bystander to the lewd behavior. Helga and Peter develop into a corny, star-crossed-lovers romance while Wanda and Julia are mysteriously butting heads -- though it is easy to guess why they don't like each other. And through all this, Monika, who conveniently looks exactly like her ancestor, is inexplicably asleep during the day and only shows her faces in a few scattered conversations. Eventually, it all comes together towards the end of the second act and Monika's role suddenly becomes central to the sexual depravity. Of course, this being a Sarno production, the vampire theme in an otherwise typical erotic film is ultimately emblematic of sexual liberation. The coven is the abnormal "Other" and they worship a creature without inhabitations or societal restraints, as though her return is a promise for freedom from a society wishing to subdue and control that side of a woman's nature, which ironically is represented by Julia. It's a fascinating film from sexploitation pioneer Joe Sarno, and it nicely holds up nearly forty-five years later. (Movie Rating: 4/5) 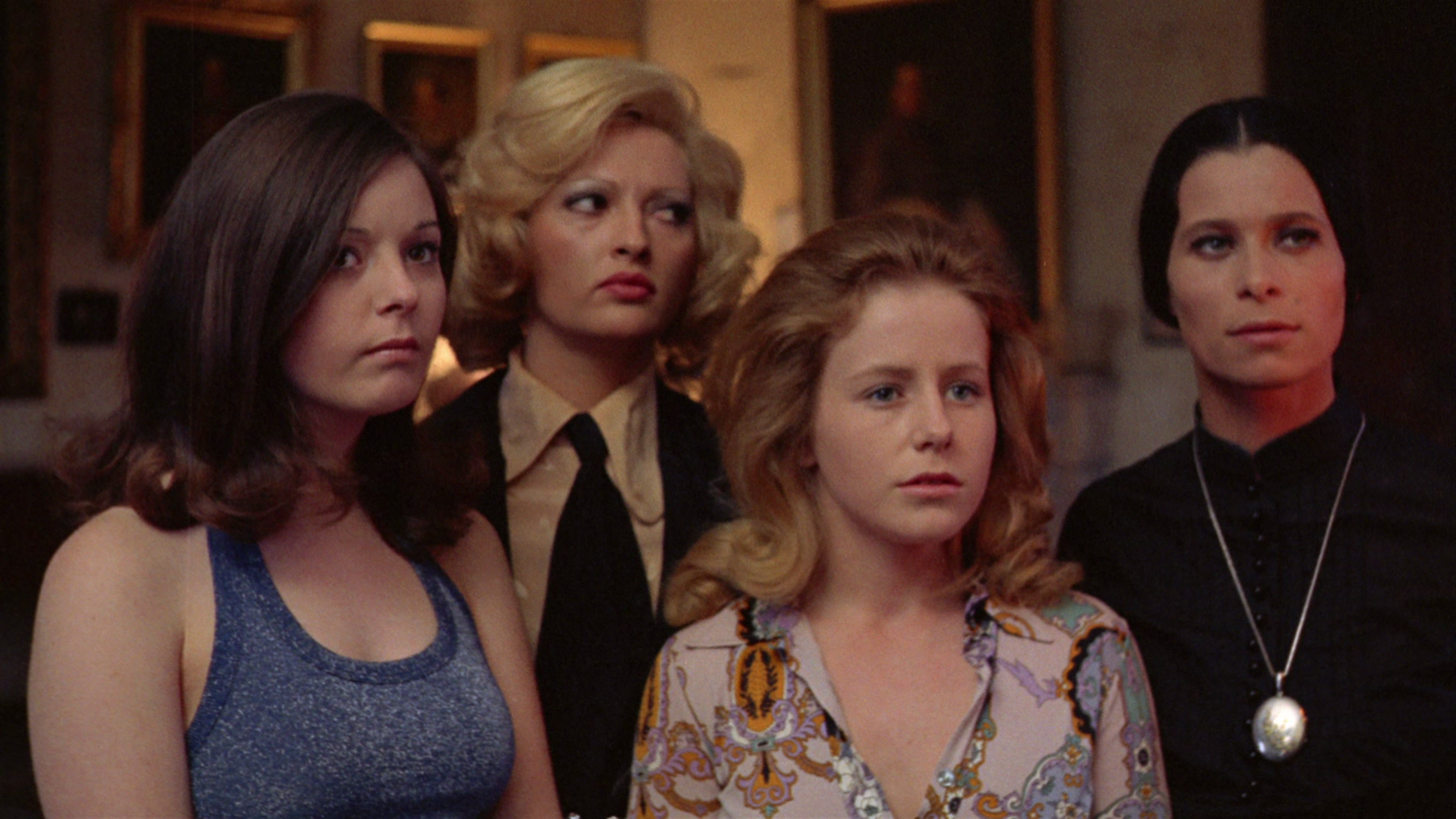 Although not officially credited with directing the sexually-charged Sin You Sinners, Joe Sarno is nonetheless considered the true mastermind behind this wicked, smutty portrayal of depraved, wayward youth. From an original script born of his depraved imagination, Sarno follows the young, naïve Bobbi (June Colbourne) as she reluctantly discovers the seedier side of the city. Her mother Julie (Dian Lloyd), a burlesque dancer for a local dive bar, and mom's boyfriend Dave (Derek Murcott), a gambling addict with the hots for Bobbi, recently moved to the neighborhood. And the movie opens with her running out the bar in disgust of her mother and wanders the city, only to quickly find degenerates everywhere. Even a seemingly shy and nice boy, Ben Furman (Charles Clements) soon reveals his true intentions for the reserved, timid Bobbi. But as soon as she starts displaying more confidence and independence in herself, tensions between her mother and herself begin reaching a boiling point, making for a rather unusually subtle horror drama like none other.

Marking only his third feature film, the year before gaining more recognition with Sin in the Suburbs, Sarno explores many of the same themes as in many of his underground, micro-budgeted productions. As a pioneer of the sexploitation subgenre, the New York born filmmaker made fascinating features about sexual liberation, violence inherent in society and the hypocrisy of pretending neither is true. Here, Colbourne's Bobbi is nervous and fearful of sex, which is ironic given her mother's career and unconstrained personality. Men continuously objectify her while walking through city streets, and many supposed friendly faces are ultimately playing a game for a purpose, as though she's thing needing to be won. There's never really a moment when she's treated as a person. Her mother's Haitian amulet is treated not only as the source of her fortune telling seductions but also as a metaphor for her confidence. Essentially, the film revolves around Bobbi coveting a strange, mystical object of female empowerment, a journey that end in a quirky montage of a private burlesque show, murder and a bizarre sense of self-assuredness. (Movie Rating: 3/5) 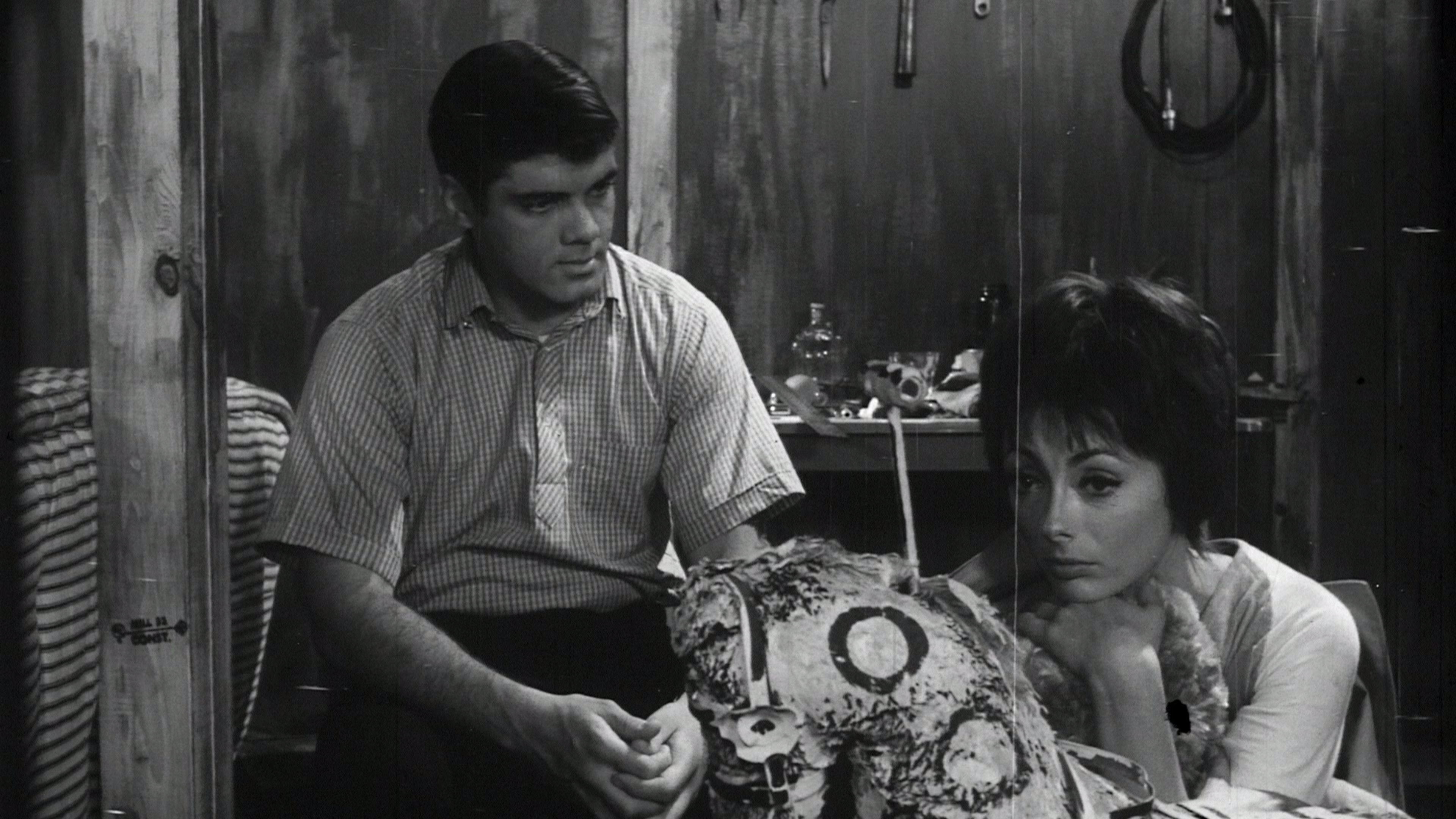 According to notes on the back of the package, the cult sexploitation favorite was endowed with a brand-new remaster and scanned at 2K resolution. From the look of things, producers might have used the original elements when creating this new AVC MPEG-4 encode, and that source appears to be in superb condition. There are some minor white specks and bits of dirt here and there, but they're negligible and easy to miss. The rest of the 1.78:1 image is clean and consistent with good, balanced contrast and crisp, brilliant whites, making the presentation feel fresh and renewed. Brightness levels, too, are excellent, delivering rich, inky blacks in the clothing of the weird caretakers and in the dark, stygian shadows adding to the cinematography's gothic atmosphere. Except for a very few poorly-resolved moments, likely related to the age of the source, colors are accurately rendered and even quite animated in a several areas. Awash with a thin layer of natural grain, the high-def video is excellent, giving the forty-plus year old movie a new lease on life. (Video Rating: 4/5)

Like the above movie, producers remastered the underground gem from a 2K scan of the best available elements. Sadly, the best available hasn't aged particularly well. In fact, the entire AVC encode is peppered with white specks, bits of dirt and vertical scratches from start to finish. Thankfully, beneath these age-related artifacts, definition is surprisingly sharp, revealing lots of fine lines and details in the clothing, the furniture and various background objects. Facial complexions, especially in closeups, are highly revealing with visible lifelike textures. Contrast tends to run hotter than normal in some spots, but it's fairly balanced and comfortably bright. There is also some noticeable discoloration in the brightness levels between frames, almost creating a bizarre pulsating effect, but for the most part, blacks are true and accurate. Altogether, and along with a thin, fine layer of natural grain, the 1.78:1 image comes with an appreciable film-like presentation. (Video Rating: 3/5)

Although not directly stated, it's safe to assume producers used the same elements when creating this legacy Dolby Digital 2.0 monoaural soundtrack. And like the video, the source has aged incredibly well with a surprising good amount of background activity and a variety of sound effects that come through cleanly. This provides the movie with a great sense of presence and a highly engaging soundfield, in spite of everything being contained in the center. The mid-range is quite dynamic with excellent clarity and detail in the higher frequencies. Each drumbeat, high-pitched scream and the noise of the local wildlife is discretely heard in the distance, creating an impressively wide and extensive soundstage. Vocals are well-prioritized and distinct, making every corny line and conversation intelligible and unmistakable. Though lacking any worthwhile bass, this is the best the movie has ever sounded, and cult lovers should be thoroughly impressed with the results. (Audio Rating: 3.5/5)

Also taken from the same elements used for the video, the movie casts its spell with a legacy Dolby Digital 2.0 monoaural soundtrack. Unfortunately, the results are not as pleasing, having more to do with the condition and quality of the source than a fault in the codec. Immediately apparent are the vocals coming in at a lower volume than normal, making it difficult to sometimes hear the dialogue. Then again, many of the conversations were badly recorded to begin with, often sounding hollow and distant with a bad echoing effect in some scenes. Although background activity is plainly audible, the track is littered with a distracting hiss and lots of popping sounds. A middling midrange lacks warmth and fidelity, exhibiting a narrow and tightly uniform soundstage without much of a low-end to speak of. Overall, the mix is sadly dull and flat. (Audio Rating: 2.5/5) 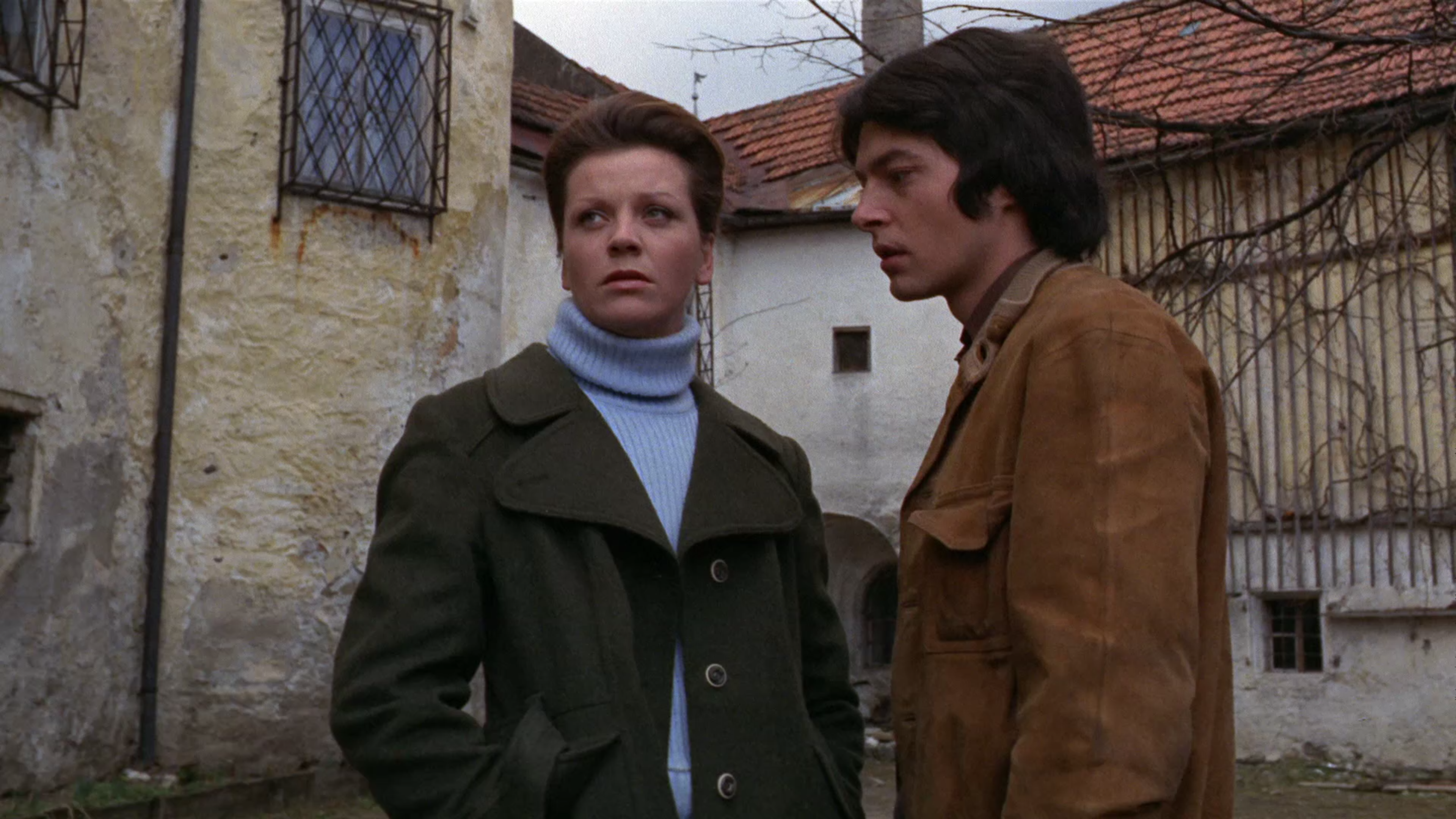 Film Movement brings the pair of cult sexploitation gems to Blu-ray on a single Region Free, BD50 disc containing both films, but the bonus material is only accessible when choosing Vampire Ecstasy. Housed inside a clear, eco-vortex case, the package includes a 16-page, color-photo booklet that features an insightful essay by Tim Lucas of Video Watchdog entitled "Under the Skin: Introducing Joseph W. Sarno."

Bonuses kick off with an Audio Commentary that's more like an interview conversation with producer Chris Nebe where he reminisces on the production and shares a good amount of insight on its history and reception. This is followed by a 2005 interview with filmmaker Joe Sarno (7 min) discussing the story's genesis, his interest in the horror genre and the film's visual style. Next is another 7-minute interview from 2004, this time featuring Sarno and Nebe chatting about their long-time collaboration. Supplements finish with a trio of theatrical trailers, one of which is German. 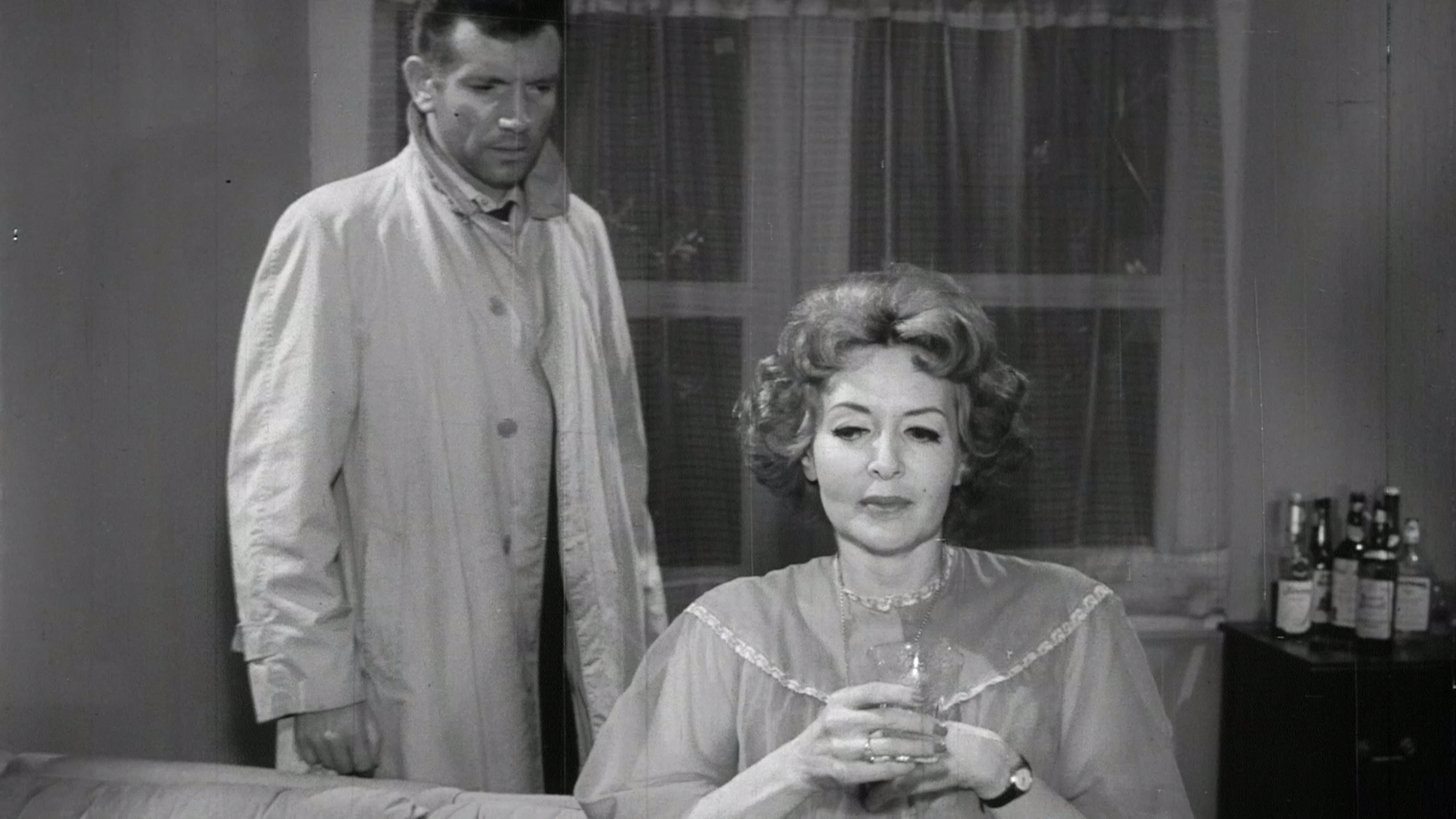 Years before "Euro-Sleaze" (European Erotic Cinema) became a thing, Joe Sarno was prolific in the underground independent filmmaking industry, with such titles as Sin You Sinners. In the years that followed, he continued to grow as an influential pioneer of the sexploitation subgenre and took his particular style to the world of horror with the gothic favorite Vampire Ecstasy. Film Movement brings the pair of cult favorites to Blu-ray thanks to new 2K remasters of each, and the results are excellent. Both also come with new legacy Dolby Digital soundtracks, which not be as satisfying as the video but are an improvement nonetheless. Although bonus features are the light side, the overall package is still worth the price for cult collectors and enthusiasts.