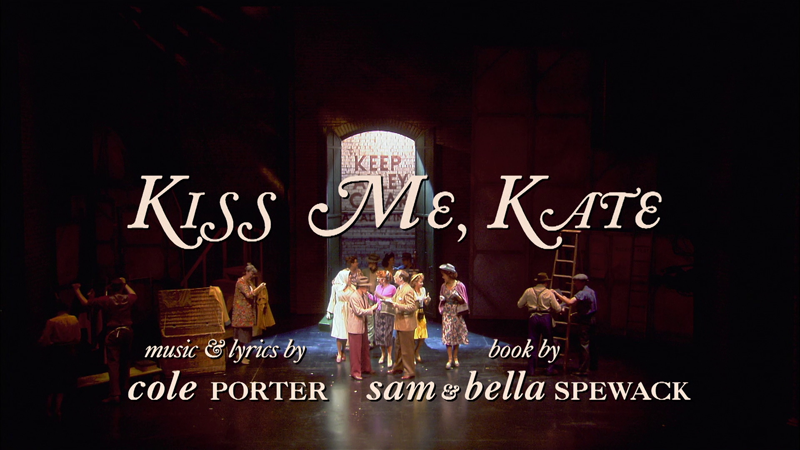 Reviewer's Bias*
Loves: musicals
Likes: innovative Shakespeare adaptations
Dislikes: the lack of a stand-out songs
Hates: that most musicals are unavailable once their runs end


The Movie
Thanks be to Shout! Factory for their line of Broadway titles, which fill a massive hole in the world of musicals, making sure classic shows are available for future audiences to enjoy and allowing those who can't get to New York City or a nearby touring show to experience great shows. (What I would do for a well-recorded copy of the American Psycho musical or the Tony-winning cast of Avenue Qm just to name a couple...) Kiss Me Kate, written by legendary composer Cole Porter, has a sterling legacy, with a host of Tony awards, for both its original production and its 1999 revival, isn't one of those shows that jumps right to mind among the best of the best, but its unique structure, with a performance of Shakespeare's The Taming of the Shrew being influenced by drama involving the show's two leads, makes it a favorite amongst theater fans. As part of PBS's Great Performances series, a live London performance of the 1999 revival of the show was recorded, though only a few members of the cast who helped the show earn several major awards were on hand.

For those unfamiliar with Kiss Me Kate, it tells the tale of Fred Graham (Brett Barrett), an egomaniacal multi-hyphenate putting on a production of Shakespeare's The Taming of the Shrew while playing Petruchio. There are a variety of problems however, including Bill, an unreliable dancer with a gambling problem (which brings a pair of mob enforcers into the picture); Lois, a ditzy starlet the director has his eye on; and his ex-wife Lilli (Rachel York), a movie star bringing her starpower to the role of Katherine, along with their personal conflict. There remains however a spark between the two, at least until Lilli realizes Fred's interest in Lois, thanks to a very Shakespearean intercepted note. 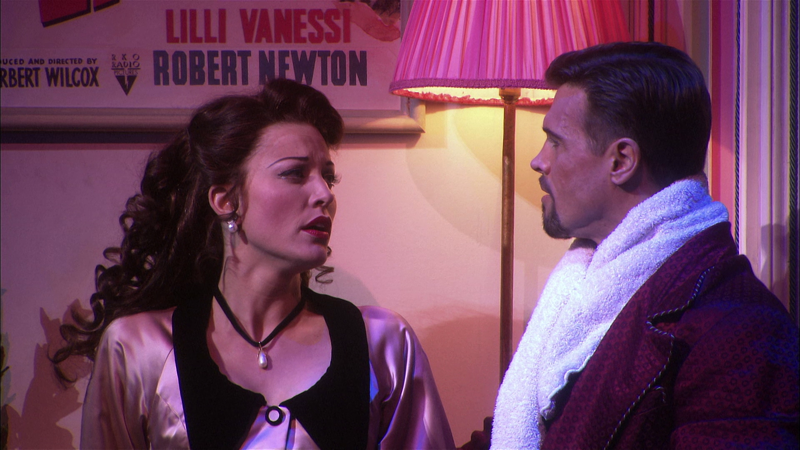 These background issues all play out in and around the cast's performance of The Taming of the Shrew, and affect the show in both subtle and extremely obvious ways to comedic effect. (Forgive me however if I can't accept the integration of the gun-toting thugs into the play.) Around those scenes (which feature the words of the Bard, some legitimately enjoyable performances and excellent dance numbers) we get a peek behind the scenes, as the drama plays out between Fred and his fellow castmates, not to mention the arrival of Lilli's straightlaced new military beau. It's not exactly a laugh riot, but there's enough going on to maintain a quality level of energy that gets across to the audience (who are rarely seen or heard, giving the show the odd feel of theater in a vacuum.)

Though there are a few songs that transcended the show, like the Act II-opening "Too Darn Hot", the oft-covered "So in Love" or the vaudevillian "Brush Up Your Shakespeare" (which feels like filler in the flow of the show), most of the musical numbers are less memorable than you'd hope for, including the titular "Kiss Me Kate." York gets to show her comedic chops in "I Hate Men" and her wonderful pipes in the aforementioned "So in Love", while Nancy Kathryn Anderson is fabulously slinky with "Always True to You in My Fashion" and "Where is the Life That Late I Led" is a showcase for Barrett, but there's not a lot more that grabs you, which is a shame for the obviously-talented Kaye Brown and Nolan Frederick, who, as Hattie and Paul respectively, get criminally little to do. 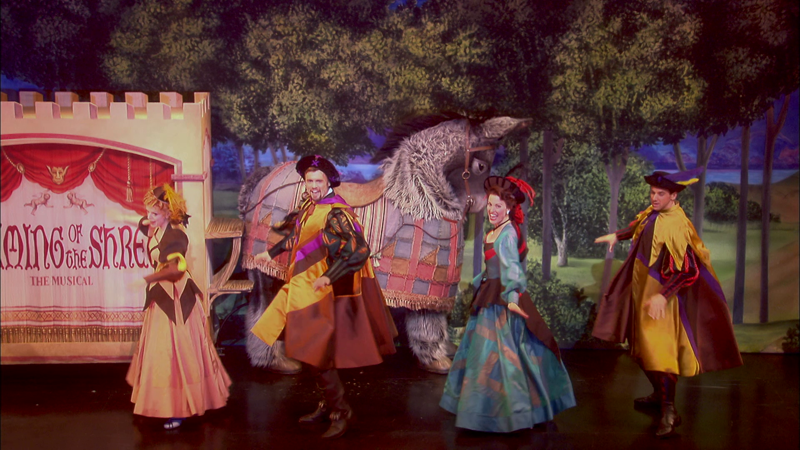 The Disc
Kiss Me Kate arrives on one Blu-ray disc in a standard-width Blu-ray keepcase. The disc features a static menus with options to watch the film, select musical numbers and adjust languages. There are no audio options, but subtitles are available in English SDH.

The Quality
Presented with a 1.78:1, 1080p, AVC-encoded transfer, Kiss Me Kate suffers the unfortunate fate of having been shot at a time when digital video wasn't as polished as it is today, and as a result it looks dated, with that sharp harshness of video from the era (that the opening titles could double for several ‘90s sitcoms doesn't help.) That said, it doesn't look bad, with some impressive fine detail (showing off the great costume and set design) and an appropriately overall-warm color scheme. There are a few problematic moments, where the lighting and focus are not up to snuff, but they seem to be inherent to the original recording, not this presentation. This film is clean throughout, and shows no obvious issues with digital distractions.

Not having a surround mix is a loss for a live performance, as you lose the effect of being in the audience, but the DTS-HD MA 2.0 track here is fine, keeping an appropriate separation between the voices and music (the audience is mostly a non-factor, outside of a few noticeable laughs.) The strength of the sound is appropriate, and Barrett's bassy voice and York's gorgeous held notes sound great.

The Extras
Nothing extra to find on this disc. 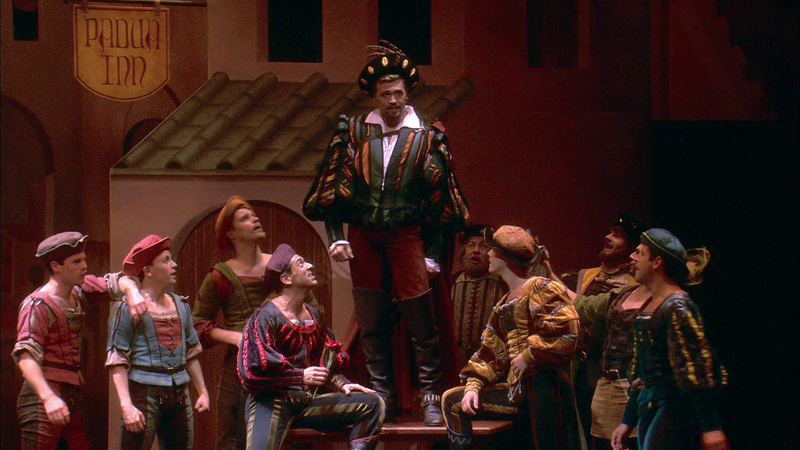 The Bottom Line
Though the cast in this version of Kiss Me Kate is talented, led by the top-notch performances of Barrett and York, this show lacks the stand-out songs that the great musicals boast, and the fact that most of the actors that made the 1999 revival an award-winner are not on hand is a disappointment. But for Broadway fans and Shakespeare folk, the show is certainly enjoyable, driven by a cast that seems to be really going for it. The presentation is solid if inconsistent (seemingly due to flaws in the original recording) but there are no extras, so if Kiss Me Kate isn't a favorite, look elsewhere for your Broadway fix at home. Francis Rizzo III is a native Long Islander, where he works in academia. In his spare time, he enjoys watching hockey, writing and spending time with his wife, daughter and puppy.Follow him on Twitter