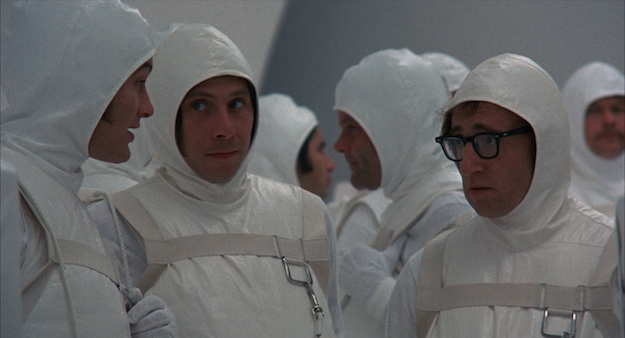 Years before He's Just Not That Into You, What to Expect When You're Expecting, and Think Like a Man attempted -- and failed -- to turn best-selling self-help books into worthwhile feature film comedies, Woody Allen made the comparatively brilliant choice to take a handful of bullet points from David Reuben's cultural juggernaut Everything You Always Wanted to Know About Sex* (*But Were Afraid to Ask) and turn them into a series of sketches.

Feature-length sketch films are notoriously inconsistent, but Everything You Always Wanted... works better than most. There are clear highlights, but no completely misguided lulls. Also, considering its 1972 vintage, the film's attitude toward gender dynamics isn't nearly as backward as one might reasonably expect. (It's all relative, but compared to the archaic hooker scene in last year's Cafe Society, '72 Woody was edgy and progressive.)

The film's two best sequences are uncontested at this point. The first stars Gene Wilder as a medical doctor who is put in the outrageous position of consulting with a patient on his romantic relationship with a sheep, only to fall for the sheep himself. The second goes into the mind and body of a man -- envisioned as a hybrid of a NASA control center and the set of an old-time submarine adventure -- as he tries to score on a first date.

It's no surprise that, in his little story, Wilder elevates what could have been a fairly pedestrian premise. His commitment to the character and his well-documented gift of atypical comic timing both ground the reality and amplify the absurdity of the sketch's premise. When his patient reveals, "I am in love with a sheep," Wilder takes a full 25 seconds before he responds verbally. It's a master class in comic reaction, as the character initially wants to laugh, wonders if he is being pranked, then becomes concerned as he decides that the guy must mean it. And all pretty subtly. Wilder has an expressive face, and he knows how to communicate these thoughts without overdoing it. From there, Allen apes the tropes of the typical infidelity melodrama. The doctor loses his wife and his practice because of his passion for Daisy the sheep. Wilder plays it pretty straight throughout, allowing the woolly presence of his paramour to do the comic heavy lifting.

Tony Randall is the anchor of the body sketch, barking orders through his headset to different parts of the body, trying to facilitate an impending orgasm. Burt Reynolds, whose breakout role in Deliverance hit theaters a week before this film, is amusing as one of the control room guys. But, most folks remember this sketch for the image of Woody in a bulky white costume, as one of a few dozen sperm, nervously waiting to be deployed like a paratrooper, in pursuit of the ovum. 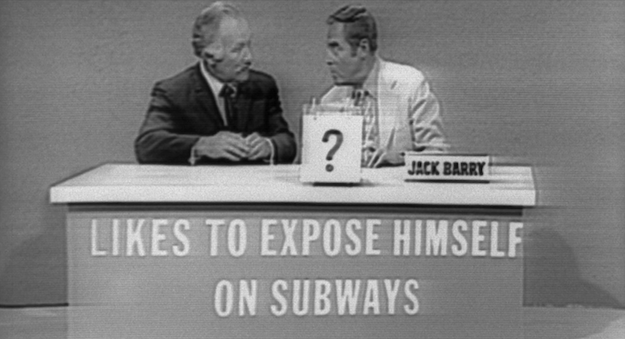 The consistency of Everything You Always Wanted... is as dependent upon the speed and cleverness of Allen's jokes as it is upon his love of movies. Viewed now, it's clear that Allen was using the sketch format to pump up his movie-directing muscles, through the handy method of deconstructing existing styles and making pastiches. In addition to the melodrama of the sheep sketch, and the war adventure of the sperm sketch, Allen mocks old horror movies in a bit where he and Heather MacRae must fight a giant disembodied breast created by mad scientist John Carradine. He apes Bertolucci's The Conformist in an Italian-language sketch where Woody struggles to give Louise Lasser an orgasm. (Recently, Allen has gone from paying tribute to Conformist cinematographer Vittorio Storaro to actually working with him, on his two newest films.)

Allen even does a straightforward parody of the '50s game show What's My Line?, with a panel of invited guests being asked to determine "What's My Perversion?" He remains true to the spirit of the original show by casting genuine TV personalities of yore, like former Twenty One host Jack Barry, Regis Philbin (then probably best known as Joey Bishop's talk show sidekick), Robert Q. Lewis, Pamela Mason, and Toni Holt. The hairstyles don't look '50s, but Allen takes a page out of the Citizen Kane playbook (and anticipates his work on Zelig) by giving the image believable kinescope wear-and-tear.

The film's relatively weakest sections have Woody smitten with some sort of shiksa goddess. In the opening bit, he's a medieval fool patterned somewhat after Hamlet (no, really), who snags a magic potion to make Lynn Redgrave's queen want to hop into the royal sack with him. Redgrave is totally game for the schticky shenanigans which follow, but much like Heather MacRae in the giant-boob sketch, her performance is missing a certain x-factor that just makes you wonder how much better Diane Keaton would have been as Woody's WASP-y foil.

With transgender rights in the news, it's hard not to put extra scrutiny upon the mid-film sketch with Lou Jacobi as a cross-dressing suburban husband. The bit is sitcom-y, but (from the perspective of this cis straight guy in his 30s) clears the big problematic hurdles. This is because the sketch finds its humor less in Jacobi's choice to put on his neighbor's underwear and dress -- he is downright joyful as he dresses up -- but more in his desire not to get caught doing it. Even the capper on the sketch, where Jacobi's wife suggests he needs therapy because he's "sick," is framed more to mock her misguided notions of empathy than to condemn his character's desires.

While Everything You Always Wanted... is certainly not the first Woody Allen flick I tend to reach for when I want a good laugh (Love and Death is still unbeatable in this respect), it proves to be a tad more evergreen than I would have expected. It was an effective and satisfying comedy to revisit. If you haven't seen it, it certainly deserves a first look. 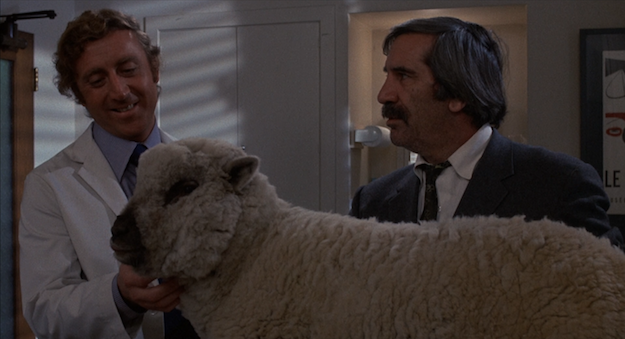 The Blu-ray
Everything You Always Wanted... comes in a limited edition of 3000 copies. It includes a booklet, featuring a liner notes essay by Twilight Time's Julie Kirgo.

The Video:
Compared to the old MGM DVD, this AVC-encoded 1080p 1.85:1 transfer feels more much accurate and balanced. (The DVD skews a little too red.) That said, the cinematography -- though it effectively apes many different styles -- is a bit soft and grainy, in a way that feels distinctly '70s. That aside, clarity and contrast are strong -- certainly a stark improvement over the DVD. Scattered speckles throughout. I don't have Arrow's Region-B release to compare, but I expect the quality is similar.

The Audio:
The soundtrack -- DTS-HD MA 2.0 mono -- is easier to applaud without caveats. Dialogue is clear and understandable, and music comes through full and well-supported. Doesn't feel distractingly narrow either. The disc has two optional subtitle tracks, one that plays during the Italian-language sequence only (this is the default) and an English SDH track.

Final Thoughts:
Gene Wilder as a doctor hopelessly in love with a sheep and Woody Allen as a sperm reluctant to do his duty are performances viewers will never forget. Even if the rest of Everything You Always Wanted to Know About Sex* (*But Were Afraid to Ask) was a bust, those sketches would live on. Thankfully, the rest of the picture is pretty darn funny as well. Highly Recommended. 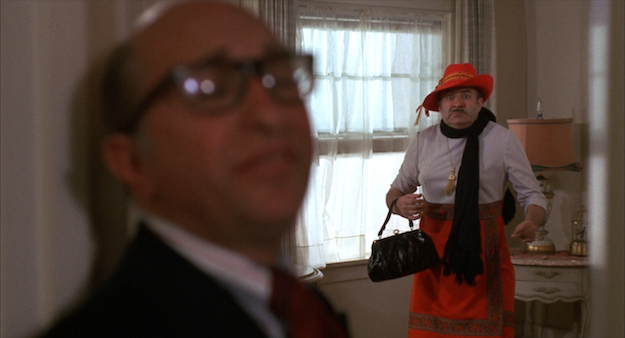