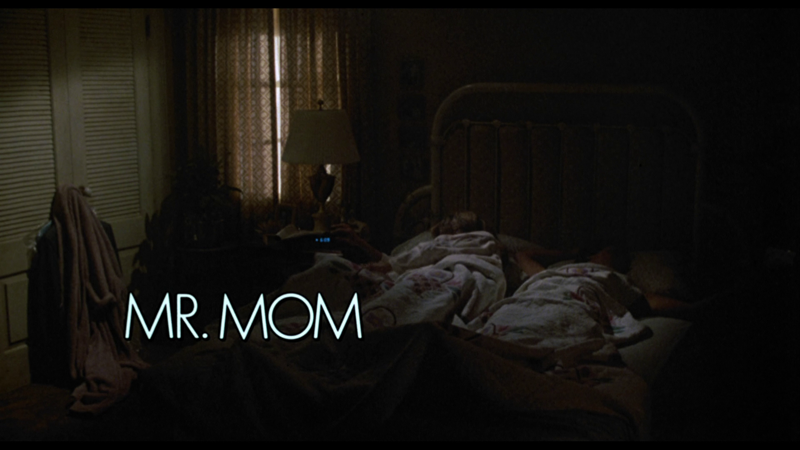 
The Movie
Everything old is new again, be it the fear of nuclear war or the looming spectre of economic disaster. Thus, an ‘80s comedy like Mr. Momremains ever relevant. Jack (Michael Keaton) has been laid off (technically furloughed) from his job as an engineer with a car company and, as he hasn't been able to find a job, his wife Caroline (Teri Garr) re-joins the workforce, taking on an advertising gig and leaving Jack to take on the housekeeping and their three young children. In a less enlightened time (and in the hands of a master of domestic disaster like writer John Hughes), this is a massive challenge for Jack and a threat to his masculinity and his marriage (thanks, in part, to the questionably aggressive pursuit of local sexpot Joan [Ann Jillian]).

Surprisingly, the film doesn't take the easy "dumb dad" route of making it just about how manly Jack can't cope with "women's work", even though he does struggle with simple tasks like diaper changing and meal prep, as Hughes' script includes several scenes of near-cartoonish coordinated chaos to intimate that a homemaker's life is not an easy one. Caroline faces her own share of problems, as being a newly-returned mom leads her co-workers to disrespect her (despite having a college degree and experience in the field) and being an attractive woman brings on the advances of her harassing boss Ron (Martin Mull). However, as she begins to succeed in the corporate world and Jack settles into domesticity, their swapped roles lead to new issues in their relationship (including some gender-swapped takes on classic marriage tropes, like the idea of letting oneself go.) 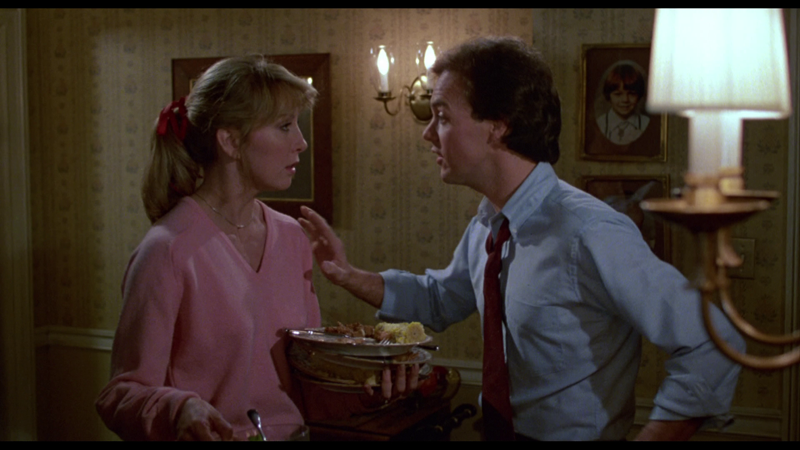 There's not a clear plot to Mr. Mom that gets the film from beginning to end, though the details of Jack's lost job (featuring Jeffrey Tambor as a perfectly pathetic pencil pusher) and the potential for Joan to break up Jack and Caroline's marriage are often-present to create drama and a sense that things are moving forward. (Why a single woman like Joan would be so insistent on an affair with a guy who can't find a job and clearly doesn't have his life together is a mystery the film doesn't attempt to solve.) At one point, a lengthy fantasy scene crops up (with some legitimately funny beats), but it serves mainly to point out how aimless the film is at many points. Yes, Caroline has a big project at work, but that only really sets up the possibility for more harassment from Ron, but Jack's journey and, for lack of a better word, redemption, lacks in motivation and agency. The whole film builds to a humorously disorderly moment that only feels like a payoff because it arrives about 90 minutes after the film started.

Despite lacking in genuine story (and instead trafficking in small moments of domestic strife and "What if mom was a dad?" gags like playing poker for coupons), Mr. Mom is driven by performances, led by Keaton (in his first feature lead) and Garr. It would be hard to pair two better, more underrated actors than this duo, with Keaton putting his trademark mix of humor and unhinged insanity on proper display (getting darker than you'd expect at points for a comedy), and Garr reminding us why she is always a delight to watch at work, nevering having to try too hard to earn a laugh. They are supported by a lot of quality performances, including some enjoyably cute child actors (Frederick Koehler and Taliesin Jaffe) as the couple's boys, Miriam Flynn as a nosey neighbor and Christopher Lloyd in a fun, small part (along with cameos by Edie McClurg and Patti Deutsch.)

Director Stan Dragoti made several solid comedies between 1979 and 1991, working well with likable stars like Keaton and Garr (as he did with Tom Hanks and Scott Bakula), but the visual flair he hints at here in small doses wouldn't really come to the forefront until his next film, The Man with One Red Shoe. The film moves well through Hughes' brand of kinetic comedy, but still hitting a few brief moments of depth. There's just not a lot of self-reflection in Jack's world (as Hughes was still a few years away from his defining works of suburban therapy.) Some sort of through-line that gave Jack more agency could have made Mr. Mom a more cohesive film, but as it is, it's an opportunity to enjoy Keaton and Garr in a lighthearted, if unspectacular comedy. 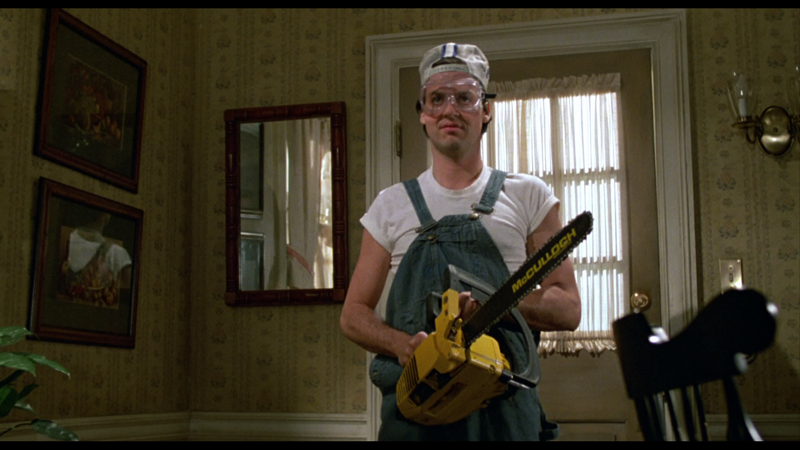 The Disc
Mr. Mom, previously released by MGM back in 2000 on DVD and in 2006 on a double-featured DVD with Baby Boom, now arrives as part of the Shout Select line in a standard Blu-ray keepcase with reversible cover art that features an attractive new Struzan-esque illustration by Shout Select regular Paul Shipper or the goofy old 2000 MGM cover art (while the slipcover repeats the new Shipper art.) The Blu-ray features a static menu sporting the same cover art with options to watch the film, adjust languages, select scenes and check out the extras. Audio options include the original English mono (presented as a DTS-HD Master Audio 2.0 track) or the new DTS-HD Master Audio 5.1, while subtitles are available in English.

The Quality
The 1.85:1, AVC-encoded 1080p transfer looks pretty nice from a distance, but if you get up close, you'll start to notice some frequent (though admittedly minor) dirt and damage, as well as some obvious jitter in the frame. This isn't an issue for most viewers, but a discerning eye might be bothered. The color is appropriate, with interior scenes in the home looking a touch dull and warm, while outdoor scenes, depending on the weather, can be bright and natural or cold and dim (in the rain scenes). The image isn't overly sharp (the right look for the era) and the level of fine detail is sufficiently high, allowing textures and small elements (like chili on a wall calendar) to be easily noticeable, while the laver of grain is stable, though some slight noise can be spotted in some scenes. Overall, a solid, but not great looking flick.

The original mono audio is delivered courtesy of a center-balanced DTS-HD Master Audio 2.0 track, and it's a good listen, delivering the elements cleanly, with good separation between dialogue and score. The 5.1 presentation utilizes the sides and rears to add some atmospheric elements to the mix, while the dialogue lives in the center channel, with some spillover into the surrounds. The effect isn't great, and the surrounds aren't working at a level to create a real sense of the environment (where it should come into play) but the elements are well-defined and clean. Low-end activity is mainly limited to the bass of some soundtrack elements.

The Extras
The only substantial extra included on this Shout Select Collector's Edition release (a label of increasingly questionable value in the wake of thin releases like Where the Buffalo Roam) is the 36-minute "Whatever it Takes: Looking Back at Mr. Mom." Unfortunately, we don't hear from Keaton, Garr or Dragoti (and, sadly, Hughes is no longer with us) so we get interviews from Jillian, Flynn, Jaffe, Koehler and producer Lauren Shuler Donner, as they reminisce about the making of the film, sharing memories of Keaton and Garr, trivia from the production and discuss the film's poor critical reception and box-office success. It's an appropriate featurette for the film, and you'll get some good info, but without so many of the big names involved, it feels a bit disappointing.

Also included is the film's original theatrical trailer (1:31), which is so very ‘80s and desperate to be clever with the mom puns. 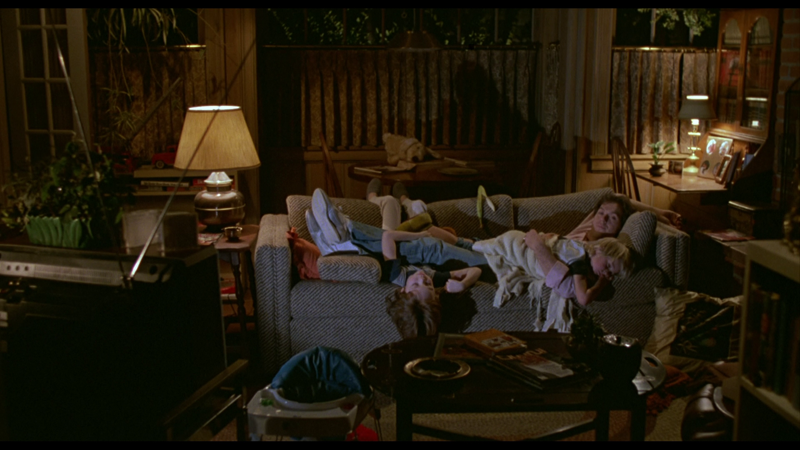 The Bottom Line
There's nothing that makes Mr. Mom stand out in a crowd of ‘80s comedies, except for the performances of Keaton and Garr, but that's honestly enough to make it worth watching, as they are both enjoyable to watch, and the movie has enough going on to never stall out, even if it's never really going anywhere. As part of the Shout Select line and listed as a Collector's Edition, the presentation is good but the limited extras are a bummer, especially since what is included lacks any of the key voices. Fans of the film should pick it up without hesitation, because this is likely as good as it will ever get, but those curious will be sated by a rental. Francis Rizzo III is a native Long Islander, where he works in academia. In his spare time, he enjoys watching hockey, writing and spending time with his wife, daughter and puppy.Follow him on Twitter