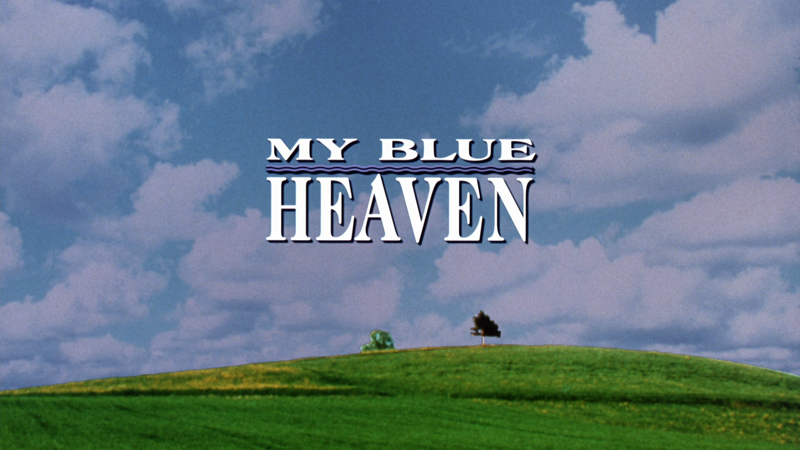 
The Movie
By 2006, Steve Martin's filmography was beginning to look rather sad, overpowered by bad to middling remakes and base fare like The Pink Panther, Bringing Down the House and Mixed Nuts. It was becoming hard to remember that it wasn't too long ago that he was at the center of true comedic gems like Three Amigos, Dirty, Rotten Scoundrels and L.A. Story. In amongst his hot streak was a nearly perfect comedy that gets far less respect than it should: 1990's My Blue Heaven, directed by the great Herbert Ross (Footloose, Steel Magnolias) and written by Nora Ephron, at the top of her game.

Vinnie (Martin) is a New York mobster who's turned informant for the FBI, and to keep him safe until he can testify at trial, he's been placed in the witness protection program and moved into a suburban development across the country near San Diego. He's under the watch of agent Barney Coopersmith (Rick Moranis), a by-the-book guy dealing with personal issues and a witness with an oversized personality and a penchant for lying and breaking the law. He's got to keep his charge out of trouble in a small town unprepared for organized crime, and alive long enough to get to court, as well as deal with Hannah (Joan Cusack), the local DA looking to bust Vinnie for his criminal ways--who may be a potential love interest for Barney. 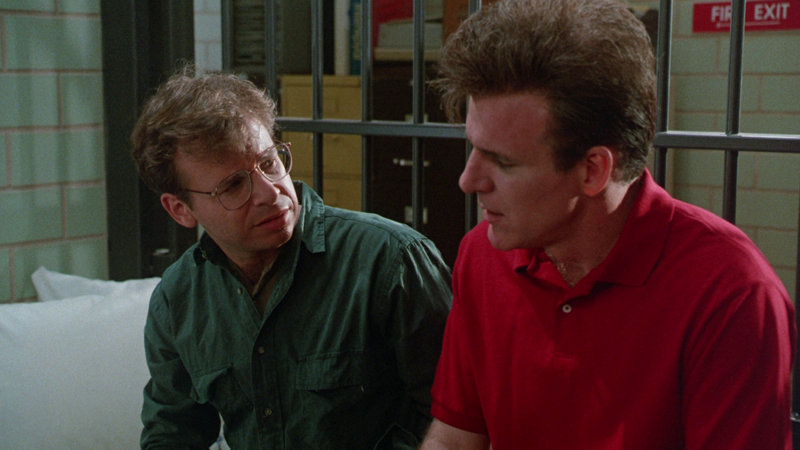 The film has an episodic structure, punctuated by title cards written from Vinnie's perspective. As a result, there's not a tremendous amount of flow to the film, moving forward in jumps, from bit to bit. This could have been a problem, but the tone set by the cards lends a classic, old-school feel to the film that blends well with the story, and they help move things along somewhat naturally (considering the plot takes place over a good deal of time.) There's a bit of padding in the film, including a pair of extended dance numbers that could be viewed as at least partially excessive, but for the most part, using the cards cuts down on the need for a lot of transitions and connective tissue and makes matters more efficient. It also lets us get the maximum amount of Martin and Moranis possible.

That's huge, because they are a delightful pair to watch at work, with Martin's stereotypical Italian gangster getting away with murder thanks to boatloads of charm and a generally good heart. Though Vinnie is undoubtedly cartoonish, he also lets Martin show his acting range, particularly in one court scene, where he delivers what may be the best line of dialogue written about turning state's witness ever. Going up against Martin playing Vinnie to the hilt automatically makes Moranis into the straight-man of the pairing, but he's utterly likable and manages to make his shows of strength believable for an otherwise nebbishy character.

Cusack, as is often the case, gets pushed a bit to the background, but with her awkward persona, she makes Hannah into someone the audience can pull for, despite her attempts to take down the film's would-be hero. That the film centers the main romantic plot around two characters like Barney and Hannah is about as unconvention as you can get. It's difficult to think of a similar duo to get such a spotlight in a recent studio film.

The rest of the cast is filled out by some terrific actors, like a scene-stealingly hilarious William Hickey, adorable Melanie Mayron, a young Jesse Bradford and Julie Bovasso (who you definitely recognize from Moonstruck). But unfortunately, the great Carol Kane goes to waste, outside of her role in one of My Blue Heaven's best moments. When you have someone like her, you've got to give her a bigger part than the pittance she has to work with here (and even so, she turned it into a scene no one who has seen the film can forget.) 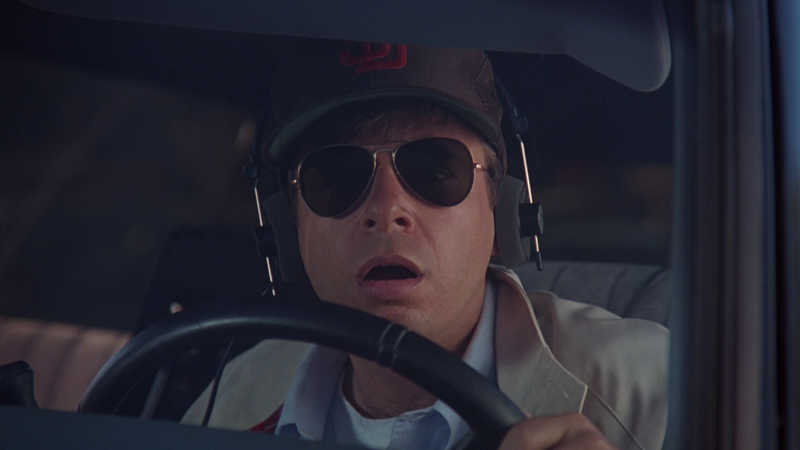 The Disc
Part of the Warner Archive manufactured-on-demand series, My Blue Heaven, is a one-disc release packed in a standard Blu-ray keepcase. The Blu-ray features a static menu sporting the same cover art with options to watch the film, adjust languages and check out the extras. (Yup, no scene select.) There are no audio options, but subtitles are available in English.

The Quality
The 1.85:1, AVC-encoded 1080p transfer here is just an incredible upgrade over the previously available DVD. Besides fixing the squishing seen on that earlier disc, dirt and damage have been almost completely eliminated (only the most minor of issues remain) and color is bright and appropriate (a far cry from the unbalanced mess on the DVD.) The level of fine detail is quite high (betrayed only by some occasional softness in the film source), allowing you see details like the patterns and textures in Barney and Vinnie's suits (even Vinnie's white jacket) and individual fibers on Barney's pajamas. Black levels are nice and deep, while the grain is stable and pleasing, making for a great viewing experience that's free of any notable digital distractions (though some slight jitter is found in a few shots.

The DTS-HD Master Audio 2.0 track is balanced across the middle of the sound field, with the focus on maintaining clear dialogue, which is a mission well accomplished. The other task is to make sure all the score and source music in the film sounds great and stands on its own, which is certainly the case, especially during the previously mentioned dance sequences, in which the music has nice heft and carries the moment. As expected for a studio comedy of the ‘90s, this a simple mix, which offers no concerns, in terms of distortion or anything else.

The Extras
The only extra is a rough-looking theatrical trailer (2:02), which sets up the plot and offers a few of the film's funnier lines (as well as an overdubbed use of profanity.) 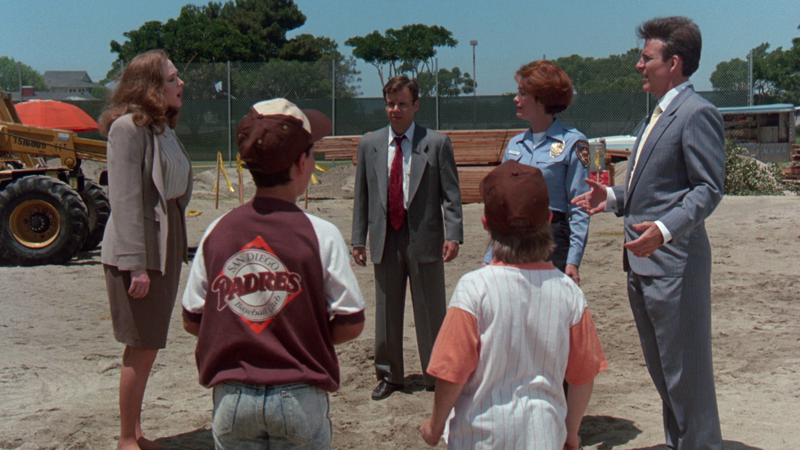 The Bottom Line
My Blue Heaven is the kind of breezy character-driven comedy that we don't see much of anymore, which is a real shame, since Martin, Moranis and company do a great job with the material, with Martin crushing it as an over-the-top New York gangster stereotype (aided by his hair and wardrobe team.) Ross and Ephron aren't breaking new ground with the episodic structure and classic look, but it's done so very well. The disc looks and sounds quite good, with no real extras to speak of, but it's such a fun film, it almost overcomes that shortcoming, though the inflated MOD price makes it less inviting it might be otherwise. If you've never seen it, you should definitely check it out, and those who own the original DVD may want to shell out for the marked improvement in presentation. Francis Rizzo III is a native Long Islander, where he works in academia. In his spare time, he enjoys watching hockey, writing and spending time with his wife, daughter and puppy.Follow him on Twitter