Ned and Stacey: The Complete Series 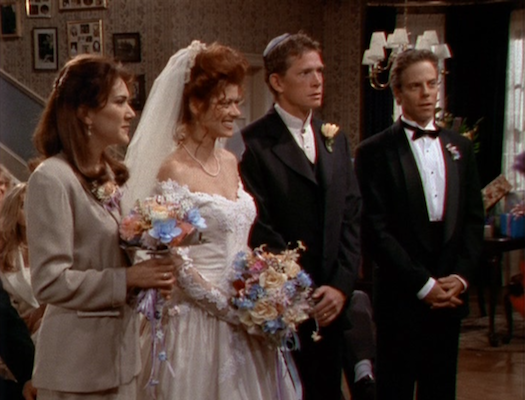 The 1995-97 sitcom Ned and Stacey has long had a reputation as a funny and smart show that deserved a larger audience than it ever attracted. The series stars a post-Wings Thomas Haden Church and a pre-Will & Grace Debra Messing in the title roles, and it was created by Michael J. Weithorn before he teamed up with Ned and Stacey writer David Litt to create the syndication staple The King of Queens. Future Being John Malkovich scribe Charlie Kaufman was one of the writers for the show's second season.

In 2005, Sony released the first season on DVD, presumably hoping to capitalize on Church's career resurgence after Sideways, but couldn't stir enough interest to ever release the show's second half. Now, Shout! Factory remedies this situation with a new complete series DVD set, including 11 episodes that didn't air during the show's original broadcast run*. Viewed altogether, a case can easily be made that Ned and Stacey is indeed a solid sleeper that might just appeal to all you young'uns currently getting your retro fix by Netflix-binging on Friends.

The show's core premise is pure sitcom contrivance. Ned Dorsey (Church) is a self-involved ad executive who learns that his firm is looking to promote a "family man." Ned lies to his boss and says that he's already engaged to be married, then needs to find a fake wife. Stacey Colbert (Messing) is a freelance journalist, idealistic but awkward, and tired of living at home. Ned and Stacey start off the show on a disastrous blind date, but once she learns of his need for a fake wife and sees his gorgeous apartment, she swallows her disgust and volunteers for the role.

Sitcom pilots are notoriously hit-and-miss, and Ned and Stacey hits its worst false notes during its premiere. The pilot must unpack its high-concept set-up in a way that seems fun and silly yet doesn't totally insult the intelligence of its viewers, and it struggles mightily. But once the show gets all that groundwork out of the way, it finds its groove quickly. The main characters make a great odd couple. Church invests sarcastic alpha-male Ned with an unexpected weirdo energy while Messing lets Stacey be childishly goofy without devolving into a full-on ditz.

The writers play with their premise in ways that can be either surprising or expected, but which are typically always satisfying. Mad Men's John Slattery shows up in a great episode, "Threesome," where Ned and Stacey jointly meet and end up liking his character and then must battle for his attention. In another episode, Stacey prods Ned into pursuing an attractive publishing exec (played by Church's former Wings costar Farrah Forke) in hopes that she will get Stacey a job. One of the sweetest running gags in the show revolves around Ned becoming attached to Stacey's parents, much to her chagrin.

Eric Germann (Ally McBeal) and Nadia Dajani (Delocated) act as married foils to Ned and Stacey, Eric and Amanda. Eric, nicknamed "Rico" by Ned, is an accountant in the advertising firm who seemingly enjoys Ned bulldozing him. It makes sense then that Rico is married to Stacey's sister Amanda, who is as cynical as his buddy, but with a more finely tuned moral compass. Amanda is typically the sole voice of reason within the main foursome, and she wishes for nothing more than the dissolution of the fake marriage. Through Amanda and Eric's relationship, the show also manages to smuggle in some "real" subplots about marriage, with vignettes about the couple's difficulty in conceiving a second child, both characters separately dealing with extramarital temptation, and various career and financial setbacks.

The show gradually reveals itself to be about the ways that Ned and Stacey's fake marriage morphs into a real one -- besides the superficial bickering and the "will they or won't they?" aspect that is de rigueur for this type of sitcom. When Stacey is caught "cheating" by Ned's coworkers, the couple decide to divorce, but their growing attachment leads them to drag out the proceedings for most of season two. Stacey may be socially naive, but Ned is emotionally naive, causing much of the show's tension to hinge on whether or not he can confront and admit his feelings about Stacey. The final episode of the series was not necessarily designed to close everything out, but it neatly manages to fulfill that purpose. The last scene leaves the characters in the most emotionally honest place we've seen them, which takes some of the sting out of the fact that we never get to see them again.

*The packaging makes a big deal out of these "unaired" episodes, but in the intervening years, Ned and Stacey has popped up on cable in the U.S. and abroad, and surely, these episodes saw the light of day during those runs. 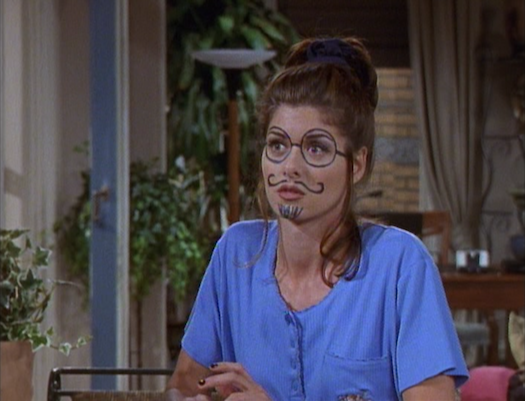 The DVD
The 46 episodes of Ned and Stacey: The Complete Series are presented on 6 DVDs, packaged on back-to-back hubs inside a standard size keepcase.

The Video & Audio:
Shout! Factory's presentation is an accurate reproduction of the show's original A/V quality. The standard 1.33:1 video is colorful, but flat and soft-looking compared to contemporary video. The Dolby 2.0 stereo audio is clean and clear, with no noticeable damage or flaws. The "new wave Seinfeld" incidental music gets to be a bit much, if you watch a chunk of episodes in a row. No subtitles, but English closed captioning is available.

- Solid but not super in-depth. Weithorn discusses the origins of the show and how the final edit of the pilot wound up being different from what he wrote.

Final Thoughts:
Ned and Stacey is the perfect blend of smart and silly, with a great cast nimbly delivering loads of laughs. It's a shame the show wasn't more popular, but two seasons is actually kind of the perfect amount of time to spend exploring this concept. I say, check it out. Highly Recommended. 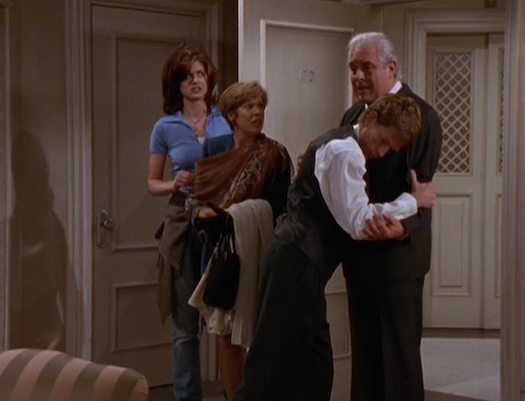