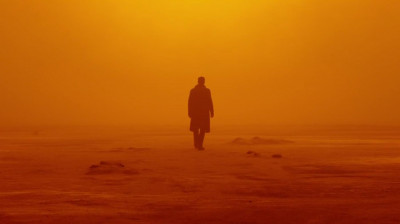 Philip K. Dick's famous short story Second Variety foretold a world where machines didn't need humans anymore because they could build their own increasingly advanced machines. This certainly takes over the basic need for human productivity, but can machines emulate, or even replicate, our souls, our capacity for emotion, for love? That's a whole other human need that would need to be reproduced if they're to take over our society. Of course there are many hard sci-fi films that study the possible repercussions of artificial intelligence that's programmed to copy human emotions, Spielberg's still misunderstood Artificial Intelligence itself at the forefront.

In films, the concept of artificial intelligence's ability to love is usually juxtaposed with the machine's feelings for a human being, but an in-depth analysis of how love between two, or even a society full of A.I., distanced from any human connection, is seldom touched upon in cinematic sci-fi, even though it's a common theme in classic genre literature written by Dick and other luminaries like Isaac Asimov.

In the original Blade Runner, based on Dick's novel Do Androids Dream of Electric Sheep, futuristic hard boiled noir detective archetype Deckard (Harrison Ford) is tasked with destroying, or "retiring", a bunch of androids called Replicants, who are almost indistinguishable from humans. As he finds out how close the emotions of the new batch of Replicants he's hunting are to humans, he gradually begins to feel compassion for the creatures, even falling in love with one of them. Of course the 115 director's cuts that came out after its initial release has added enough new material to make the audience realize that Deckard himself is a Replicant, which makes the romance at the center of the story one between two A.I. that's programmed for the capacity of human emotion. Did they really fall in love, or was it just a part of their programming?

Apart from creating a breathtakingly beautiful modern cyberpunk/noir that stands on its own two feet instead of getting crushed under the weight of the original's reputation, Blade Runner 2049 manages to take the moral and philosophical themes of the first film and expand on them to create one of the most satisfying sci-fi epics in recent memory. I don't have to tell you about the recent trend of remaking or slapping on sequels to beloved intellectual properties from the 80s in the name of quick exploitation of nostalgia. As much as some of these cynical moves can be satisfying, like the recent spat of Star Wars films, they also offer little beyond the expected fan service. Like a respectful companion, Blade Runner 2049 manages to replicate (I couldn't help myself) the awe-inspiring look and feel of the original, while also expanding its universe and themes in bold new ways.

After the press screening, we were read a note by director Denis Villeneuve, asking us not to reveal any major details from the film, even plot points and twists that are shown during the first act. For example, not only am I not allowed to tell you how Ryan Gosling's Blade Runner is connected to Deckard, I'm asked not to even tell you who he is. This was annoying at first, but now I see what Villeneuve was going for, since Blade Runner 2049 is an experience one should go in while knowing as little about its serpentine plot and genuinely surprising twists as possible. This goes double for all hardcore fans of the first film.

So what I'm left with is the ability to delve into the technical details. After last year's terrific Arrival and Blade Runner 2049, Villeneuve is now the undisputed king of cerebral big budget sci-fi. Whatever sci-fi property Hollywood has in its backlog should be immediately thrown to his lap. The near-three-hour runtime zips by thanks to Villeneuve's deft visual touch and pacing. It's one of Hollywood's biggest shames that DP Roger Deakins still doesn't have an Oscar. After his groundbreaking work here, a cyberpunk noir wet dream with stark contrast awash in dream-like oranges and reds, I wouldn't even know what to say if he doesn't snag the golden statuette this time around.