Initially the program seemed to be heading down the right-wing fantasy world of 24, where the ends always-but-always justified the means. First introduced in a story arc on Chicago Fire, the leader of Chicago P.D.'s intelligence unit, Hank Voight (Jason Beghe) was a morally reprehensible bully, a lone wolf who routinely sidestepped protocol to obtain needed information from suspects, even if that meant beating a confession out of them, or threatening them with torture or worse. The series danced around this quandary for a time, but over the past few seasons has settled upon a morally ambiguous portrayal not unlike classical film noir types like Robert Ryan's character in On Dangerous Ground (1951). He's not a monster even though, occasionally, he does monstrous things. Unlike 24's Jack Bauer, this show's writers generally avoid the temptation of justifying Voight's actions, but rather let his subordinates wrestle with the moral and legal implications.

Further, for a series more escapist entertainment than serious drama (the Scandinavian TV series The Bridge is, by way of comparison, more complex in this regard), Chicago PD admirably seems to be moving away from entertaining but frivolous high-concept action-thriller stories and toward more topical story arcs concerning Chicago PD's terrible reputation within the African-American community. Chicago Fire and Chicago Justice appear to be ramping this up a bit as well, while expanding and making more prominent African-American actor LeRoyce Hawkins's role, as Office Kevin Atwater.

Universal's DVD set includes all 23 season three episodes, as well as three crossover episodes, two from Chicago Fire, and one leading to the official series premiere (following its backdoor pilot on Chicago PD the previous season) of Chicago Justice. 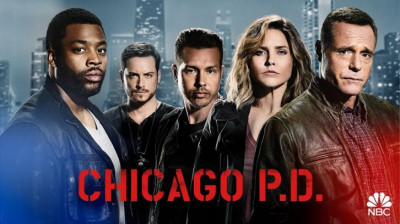 Though not absolutely necessary, if increasingly so in executive producer Dick Wolf's expanding "Chicago Universe," it helps a lot if the viewer is able to synch-up Chicago P.D. with corresponding airdates on Chicago Fire, Chicago Med, and Chicago Justice. Characters, typically multiple times each from each series, appear on Chicago P.D. and vice versa. Sometimes these are inconsequential cameos, but at other times characters become an integral part of the story and oftentimes story arcs from those shows are referenced. It's complicated.

At the tight-knit Intelligence Unit of Chicago's police department, Sgt. Hank Voight is joined by straight shooter Det. Antonio Dawson (Jon Seda), the brother of paramedic Gabbie Dawson from Chicago Fire; Det. Erin Lindsay (Sophia Bush) whom Voight rescued from the gutter and raised as his own; Det. Jay Halstead (Jesse Lee Soffer) a detective in a relationship with Lindsay and who is also the brother of Chicago Med's Dr. Will Halstead (Nick Gehlfuss; see, I told you it was complicated!).

Gung-ho Officer Adam Ruzek (Patrick John Fluegar) is a former police cadet recruited by veteran undercover specialist Det. Alvin Olinsky (Elias Koteas), who maintains a close relationship with Voight and shares some elements with Voight's dark past. Ruzek had been engaged to former flight attendant but crack uniformed Officer Kim Burgess (Marina Squerciati), who aspires to join the intelligence unit. She was passed over a while back in favor of her quietly efficient ex-partner Kevin Atwater (LaRoyce Hawkins). Her last partner, Officer Sean Roman (Brian Geraghty) left at the end of Season Four. At the beginning of the season she's partnered with Julie Tay (Li Jun Li), a victim of sexual harassment in another department.

Finally, there's Desk Sgt. Trudy Platt (Amy Morton), whose withering glances and curt manner are the bane of the precinct, but whose enormously compassionate side occasionally surfaces.

As with Chicago Fire, Chicago P.D.'s production values are extremely impressive, the show resembling a polished contemporary film more than Dragnet or even NYPD Blue.

Besides Tay's story, interesting story arcs quickly emerge. Tech guy "Mouse" Gerwitz (Samuel Hunt) compulsively wants to reenlist in the Army Rangers, for dangerous, seemingly suicidal duty. Platt is attacked while walking to her car, and her father his murdered. And the unit tries to keep the peace in a turf war between rival African-American gangs that may have been started by an outsider.

The ensemble cast is good-to-excellent across the board, with Beghe. Morton, and Koteas standing out. Sophia Bush, excellent as Detective Lindsay, always seemed destined for major stardom, and possibly in pursuit of that very thing leaves Chicago PD at the end of the season.

Twenty-three 42- to 43-minute episodes (including the crossover shows) are spread across six single-sided, dual-layered discs. The 1.78:1 enhanced widescreen shows look quite good, up to contemporary television/video standards, and the Dolby Digital 5.1 audio is, expectedly, quite lively and full of oomph. Optional Spanish audio and subtitles on Season Three has been dropped, while French subtitles have been added, a marketing decision that makes no sense to this reviewer. The discs are region 1 encoded.

Supplements include the three crossover episodes, but no behind-the-scenes featurettes this time.

Chicago P.D. gets better and better, and this season is Highly Recommended.