Universal // Unrated // August 29, 2017
List Price: $29.96 [Buy now and save at Amazon]
Review by Stuart Galbraith IV | posted October 13, 2017 | E-mail the Author
Between the first and second seasons of Chicago Med, on July 26, 2017, a pretty amazing coincidence occurred. A female nurse named Alex Wubbels at the University of Utah's hospital burn center was forcibly arrested by a short-fused police officer after she refused, per hospital policy, to (possibly illegally) draw blood from her unconscious patient. The officer was recently fired.

Ironically, almost exactly four months earlier, on a Chicago Med episode entitled "Guilty," Nurse Maggie Lockwood (Marlyne Barrett) is forcibly arrested after refusing, again per hospital policy, by a short-fused officer, under similar circumstances. This uncanny bit of prescient scripting exemplifies the timeliness of Chicago Med, a series that at first looked pretty much like a retread of older hospital dramas like ER but which hit the ground running, and is fast becoming the best of executive producer Dick Wolf's Chicago franchise shows.

One might reasonably have assumed the hospital television drama had run its course. After years of tame shows like Medical Center and Emergency, the groundbreaking trifecta of St. Elsewhere (1982-88), Chicago Hope (1994-2000), and ER (1994-2009), the latter two set in Chicago, would have brought the genre to what media theorists like to call its "terminal" stage, exhausting it to a point where no story or characterization has been left undone. St. Elsewhere particularly offered superb, highly innovative teleplays breaking all manner of new ground, while ER was arguably the first network series to really up the ante production-wise, with movie-like production values and medical verisimilitude. Where a show like Medical Center probably cost around $175,000 per episode, ER at its peak was budgeted at a mind-boggling $13 million per show.

And, yet, for all its déjà vu Chicago Med (2015-present) is almost shockingly good. The second spin-off of Chicago Fire, and part of the same TV universe that also intersects with Chicago P.D., Law & Order: SVU, and Chicago Justice, the Dick Wolf-Matt Olmstead-created series has from the outset introduced an ensemble of a dozen or so intriguing characters. While the medical issues facing the show's cast of doctors and nurses is often overly familiar - the second Season Two episode offers a familiar, heart-tugging heart transplant story, for which only one child of two can be saved - and yet these stories play fresh because the writing puts new spins on old material (the transplant story doesn't end like one have expected it to) while incorporating contemporary ethical, legal, financial, and even technological dilemmas since ER's cancellation in 2009. The one-two punch of modern medical advances (and growing crises) coupled with the American health care system and the shambles it's currently in has been a goldmine for Chicago Med's writers.

Universal's DVD set of Chicago Med: Season Two includes all 23 episodes (up from 18 last season), as well as crossover episodes from Chicago Fire and Chicago PD. Characters from the other three Chicago franchise shows make appearances but, almost thankfully, there are no byzantine crossover episodes, so the set can be enjoyed all by itself. 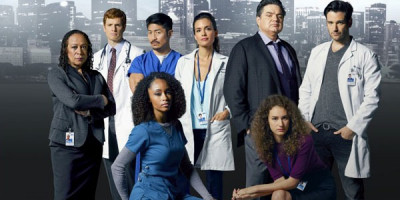 Primarily set in the emergency ward of the Gaffney Chicago Medical Center, the series first introduced many of its characters via episodes of Chicago Fire and/or Chicago PD before becoming its own full-blown series. Dr. Will Halstead (Nick Gehlfuss), for instance, was introduced on PD as the brother of Det. Jay Halstead. ED Nurse April Sexton (Yaya DaCosta), first turned up as a childhood friend (and later almost-girlfriend) of Chicago Fire's Kelly Severide.

Will frequently butts heads with trauma surgery fellow Dr. Connor Rhodes (Colin Donnell). Like Noah Wyle's Dr. John Carter on ER, Connor comes from an obscenely rich family but forsakes his family's business interests for a career in medicine. Pediatrician Dr. Natalie Manning (Torrey De Vitto), an Iraq War widow and mother of his child, is in a relationship with firefighter-turned-med-student Jeff Clarke (Jeff Hephner), though Halstead secretly pines for her also.

Despite having graduated med school at the end of Season 1, Dr. Sarah Reese (Rachel DiPillo), declines a pathology track and at the start of the season is seen working at a coffee shop. However, Chief of Psychiatry Dr. Daniel Charles (Oliver Platt), recognizing her talent and instinctive patient empathy, persuades her to come back to the hospital, working under him in the Psychiatric Department.

As noted in my review of Season One, the fine acting of Oliver Platt routinely impresses me particularly. I'd seen him in a number of films and TV appearances before, but here he's almost magical whenever he's onscreen, like the irregular appearances of Alan Arbus's Dr. Sidney Freedman on M*A*S*H. Theirs are idealized portrayals of the psychiatric profession (which rarely manifests in real life, it seems). He's the single best thing about the show, and if Chicago Med enjoys a long run, he may be remembered as one of television's great characters.

Twenty-three 42- to 43-minute episodes are spread across six single-sided, dual-layered discs. The 1.78:1 enhanced widescreen shows look quite good, up to contemporary television/video standards, and the Dolby Digital 5.1 audio (available in English only, dropping the Spanish and Portuguese options of the Season One set) is, expectedly, quite lively and full of oomph. Optional English and French subtitles (again dropping Portuguese and Spanish) are available, and the discs are region 1 encoded.

Unexpectedly very good and getting better all the time, Chicago Med is Highly Recommended.