Universal // Unrated // September 12, 2017
List Price: $32.77 [Buy now and save at Amazon]
Review by Stuart Galbraith IV | posted October 13, 2017 | E-mail the Author
For this reviewer, the jury's still out on Chicago Justice, but not with the network distributing it, NBC. Though the packaging lists this as "Season One," it's also officially "The Complete Series," NBC having cancelled it this past May, a week after airing what turned out to be its final episode. Universal selling this as "Season One" may be wishful thinking: another Dick Wolf-produced show, Law & Order: Criminal Intent began on NBC, but then moved to the USA Network for its last four seasons, so it's not impossible that program might continue somewhere else.

The show began as a backdoor pilot on a Season Three episode of Chicago PD in May 2016, then returned as a mid-season replacement in March 2017, nearly a year later, a longer-than-usual gestation period. Oddly, while all of the 2016-17 season episodes of all the Chicago franchise shows (the others being Chicago Fire, Chicago PD, and Chicago Med) were all released this early fall, as of this writing there's been no announcement at all about a DVD release of the 2016-17 season (its 18th) of the popular and long-running Law & Order: Special Victims Unit, though it's set to be released in Australia in December. Chicago Justice is presumably out now on DVD to sell what units it can before the show is completely forgotten, or maybe to generate some interest in a renewal on cable, streaming, or someplace else.

However, for those of us trying to coordinate all these interlinked shows, timing is everything, and Chicago Justice doesn't quite fit into the equation. The first official episode was also the final third of a three-part crossover story arc, that began with "Deathtrap," an episode of Chicago Fire, and continued with "Emotional Proximity," an episode of Chicago P.D., both originally airing March 1, 2017. "Fake," the premiere Chicago Justice episode, aired that same evening.

Universal's DVD set of Chicago Justice: Season One includes all 13 episodes as well as crossover segments from Chicago Fire and Chicago PD. 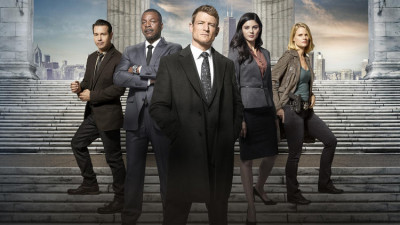 The plusses and minuses of Chicago Justice are, in retrospect, pretty obvious. The show is really a minor tweaking of Law & Order, here set primarily at the Cook County State's Attorney's office, as its ensemble cast investigate and prosecute various crimes.

One obvious problem is nominal lead Philip Winchester as Asst. State's Attorney and Deputy Bureau Chief Peter Stone. Law & Order: SVU has always had a knack for creating interesting District Attorney characters, and fine actors to fill those roles (Stephanie March, Diane Neal, and most recently Raúl Esparza). Esparza's character, Rafael Barba, is particularly good: acerbic with a quick, withering wit and highly intelligent. By contrast Winchester is handsome but rather blandly so. Wolf's shows have been far better than most about casting minorities in prominent roles, but while all these series are basically ensemble pieces, the nominal leads have almost always been white men (even SVU when it began).

Jon Seda's character from Chicago PD, Antonio Dawson, moves here to work as an investigator for the Bureau. His clashes with fellow investigator Laura Nagel (Joelle Carter) are more interesting, she less familiar with or sympathetic toward Chicago PD methods and officers Dawson has known for years. (Her character was either conceived or changed from a former Chicago PD officer herself, who left after a bout with prescription pain-killer addiction, though some episodes would seem to ignore this back story.)

Rounding out the cast are Monica Barbaro as Assistant State's Attorney Anna Valdez, a disciple of Stone who has been practicing law for only three years; and Carl Weathers (yes, of Rocky fame) as State Attorney Mark Jefferies. He's a welcome presence, and more authentic than the more conventionally attractive cast.

The series big aim is topicality, but it tries too hard. "See Something," for instance, starts out as a hate crime show with a Muslim victim and a white defendant, with unapologetic racist frat boys in court, shouting racial epitaphs. So far, so good. But then the episode adds myriad other topical controversies, such as one Muslim female witness appearing in court in full hijab, showing only her eyes. The preliminary trial collapses and other suspect, this time a Muslim as well, is brought to trial, he admitting to the killing, but only because the suspect was planning a terrorist attack and assumed, based on recent news events, authorities wouldn't believe his assertions. Then it turns out the crime was committed out of simple professional envy. In short, there was more than enough material for at least three separate shows, but by cramming the material into a single episode, none of these issues have time to leaving any lasting impression.

It's too bad Chicago Justice misses the mark like this, as a genuinely topical legal drama, one less sensationalized than the entertaining but usually slicked-up headlines-based SVU plots, has the ingredients for great TV drama.

Thirteen 42- to 43-minute episodes are spread across three single-sided, dual-layered discs. The 1.78:1 enhanced widescreen shows look quite good, up to contemporary television/video standards, and the Dolby Digital 5.1 audio, also in Spanish with optional English, French, and Spanish subtitles is quite lively and full of oomph. Region 1 discs.

None, other than the aforementioned crossover shows.

Not bad but disappointing considering that, up to now, each new Chicago series had been richer than the one that had preceded it, Chicago Justice is just okay. But who knows? Maybe it'll somehow survive on "cable" and even possibly improve (or not). Rent It.