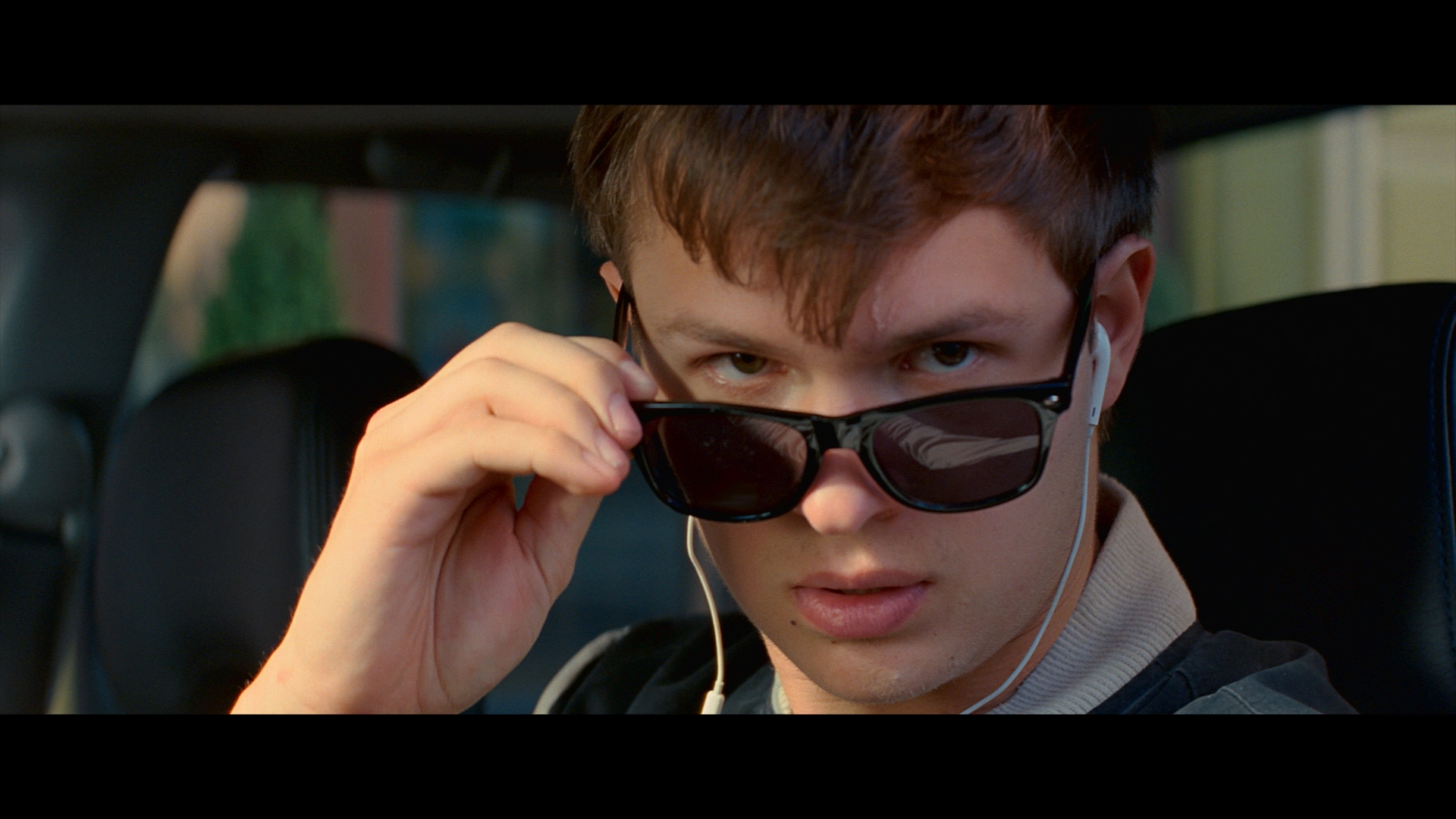 Edgar Wright, the director behind the popular zombie parody Shaun of the Dead and the cult film (although box office disappointment) Scott Pilgrim vs. the World, tackles the heist/crime genre with his latest title, Baby Driver. And while this movie delivers everything one would hope for in terms of fast car chases and big shootouts, the biggest surprise with Wright's movie is that it's actually a musical...that's right, a musical! And a darn good one at that.

Now, don't worry, Baby Driver isn't a musical in the traditional sense of the word. Lead characters don't burst out into show tunes at any given moment. Instead, the lead character here, yes, indeed named "Baby" (Ansel Elgort), who is the assigned getaway driver in various heists, times his movements by listening to various songs. He often does this outside the heists as well - as shown in a wonderful early segment shot by Wright where Baby has to pick up coffee and various things he is passing along the street are directly related to the lyrics of the song we're hearing.

Baby has the hearing condition known as tinnitus, where there's a ringing or buzzing in one's ears at all times. The music that Baby constantly listens to helps block it out (or at least keep his mind off of it), which is why he almost constantly is wearing headphones. Baby works for the mastermind behind all the heists, Doc (Kevin Spacey), although the connection between the two men is rather vague. What viewers do know, however, is that Baby owes Doc a debt, and once he's done with a certain number of heists, that debt will be paid off. Of course, when Baby does pay off his debt, Doc blackmails him into being part of one more heist. This is par for the course for such movies - as is the fact that the heist will go horribly wrong.

Doc never uses the exact same crew twice for any job, but he doesn't have a problem with using a mixture of them, so when viewers see Buddy (Jon Hamm) and Darling (Eliza González) join Baby in the movie's opening heist scene and then watch Bats (Jamie Foxx) as part of a team for the next heist, rest assured that those three will team up with Baby for the movie's big finale. And when Baby finds himself falling for local waitress, Debora (Lily James), one can also be certain that these bad guys will use that fact as an advantage over Baby.

It's honestly a surprise that Baby Driver works as well as it does. In terms of the story itself, there's nothing particularly fresh about what transpires. It's the energy that Edgar Wright and the actors instill in each scene - and, of course, the continuing onslaught of music - that makes everything so enjoyable. Wright is obviously having a fun time here, and that fun shows on screen. Is Baby Driver perfect? No, it overstays its welcome just a bit, with a climax that goes on far too long and a coda that I'm not sure this movie needed. But make no mistake, this is a movie that is worth one's time, and I enjoyed it quite a bit.

Baby Driver races onto 4K Ultra HD in this combo pack, which also includes the dual-layer 50GB Blu-ray. The two discs are housed inside a black eco-Lite Vortex keepcase along with a pair of inserts: one being an advertisement for Sony titles on 4K, and the other containing a code for an UltraViolet digital copy of the movie (I redeemed mine on Vudu on did indeed get the UHD digital version, for those wondering). A slipcover with artwork matching that of the keepcase slides overtop. There is a front-loaded advertisement for Sony 4K movies on the 4K disc, while the Blu-ray is front-loaded with trailers for Spider-man: Homecoming, Rough Night, Life, T2 Trainspotting, The Dark Tower, and November Criminals, plus an ad encouraging viewers to check out the Baby Driver bonus features on the Blu-ray once they've watched the movie.

The Blu-ray in this release is region-free (something that's not always guaranteed from a Sony release), and the 4K disc, of course, has no region coding.

Baby Driver was shot on a series of various cameras - most of them from the Arri family of products and primarily digitally, although some 35 mm footage was shot on the Arri LT as well. The mixture of cameras used means a slight variation between the look of various scenes, but primarily the movie looks like most digitally shot modern movies. This transfer was apparently created from a 2K digital intermediate, which does mean it's not actually "true" 4K, but that can be said for a large majority of other Ultra HD releases as well, and this one hardly suffers because of it - the image still looks quite detailed. Both the 4K disc and the Blu-ray present the movie in the 2.39:1 aspect ratio.

The Blu-ray transfer of Baby Driver is pretty impressive itself, with lots of detail and color; however, the 4K image does give things an added boost - primarily in terms of HDR (high dynamic range) and inkier black levels. One can immediately notice the difference that HDR provides with the red car that Baby is driving during the getaway in the opening scenes. Latter scenes get enhanced by the color boost as well, particularly those in the diner, or in one well-designed laundromat scene, where red, yellow, or blue clothing is spinning in the various dryers behind the characters. The black levels provide a needed boost and clarity to some of Baby Driver's darker moments - particularly a movie-ending shootout that takes place at night in a parking garage.

Like many 4K movies that I own, I'm not sure the video quality on the 4K disc is such a vast improvement over the Blu-ray that it should factor into one's purchasing decision (the audio, as you'll read below, however, is a different story). That said, if you want the most optimal picture available, 4K is the way to go.

While there isn't a huge leap between the Blu-ray and the 4K disc in terms of video quality, the audio is a completely different story. Although the Blu-ray features an active and capable DTS-HD Master Audio 5.1 track, the 4K disc ups the ante with an Atmos track (Dolby TrueHD 7.1 compatible for those without such a home video setup) that is pretty much perfection. This movie is all about the musical soundtrack, the squeal of rubber on the road, and the big shootouts, and the audio here renders it all perfectly - with an impressive, immersive, and dynamic Atmos presentation. As I've mentioned in other parts of this review, Baby Driver is a movie that - despite its violent themes - is really out to just provide the audience with a fun experience. This track adds so many levels to that fun, it's one of the big reasons the 4K should be considered over the Blu-ray release. 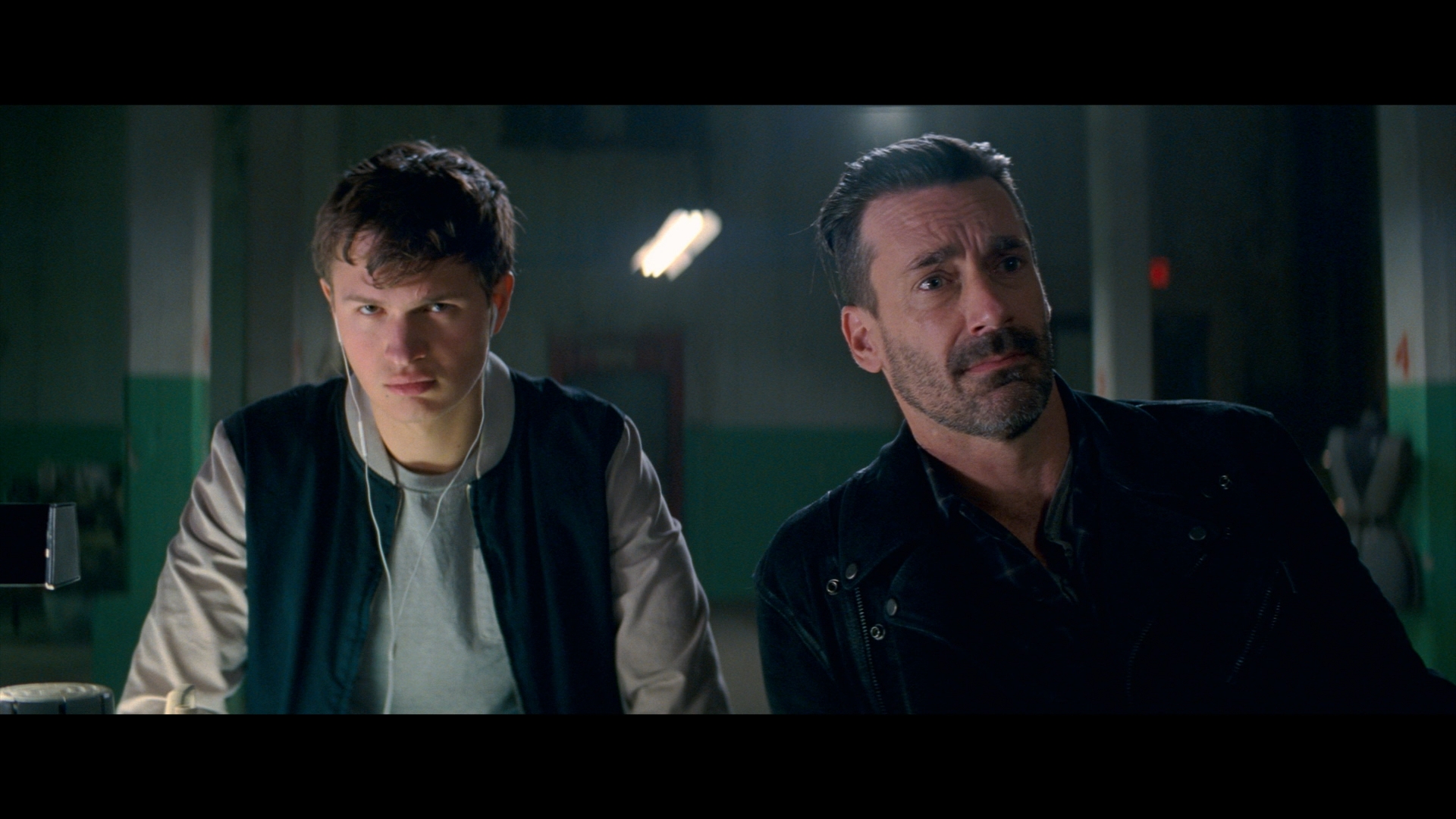 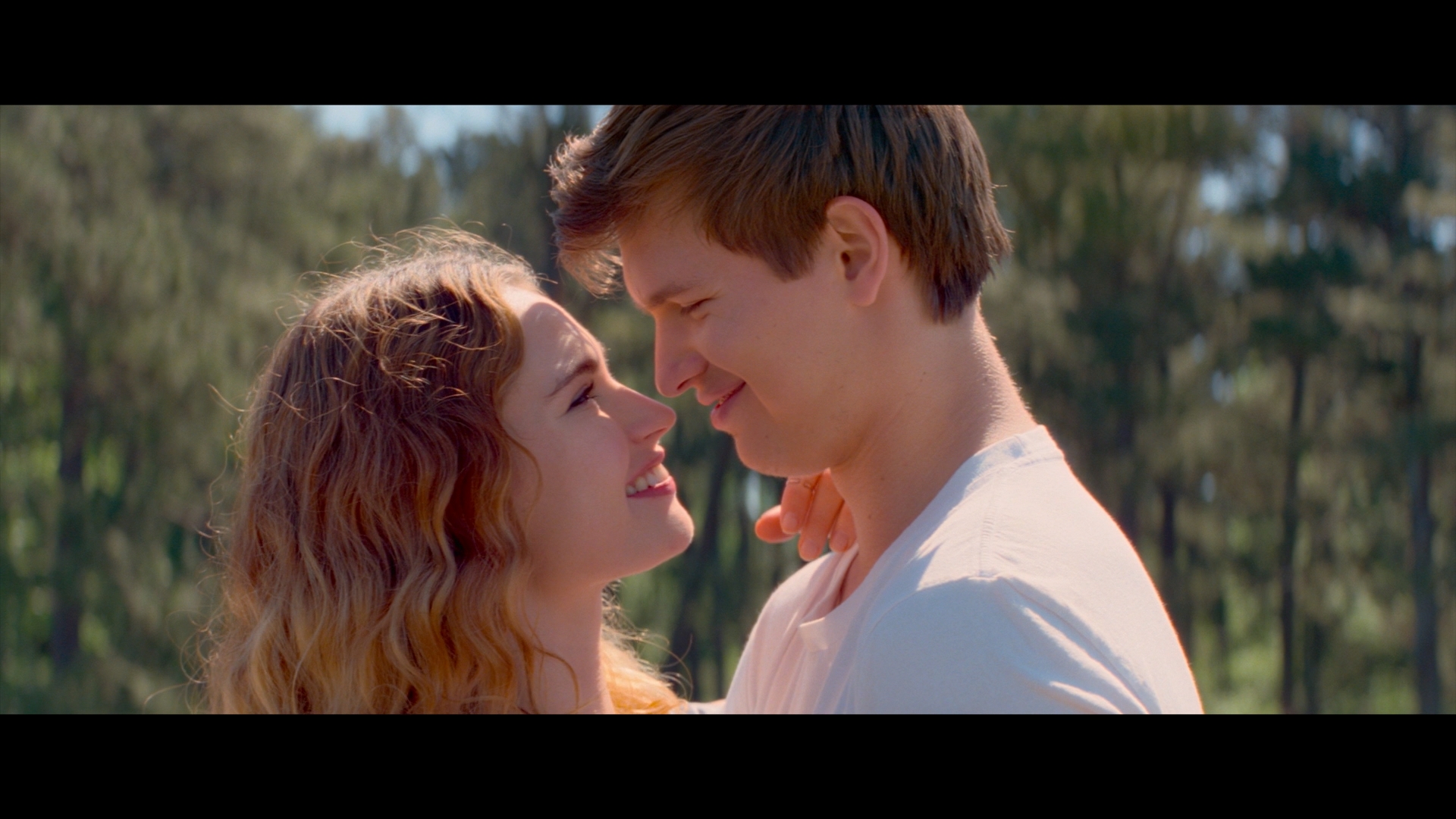 Edgar Wright's Baby Driver is a fresh, fun take on the ol' heist movie, with lots of fun visuals, solid acting, and a rockin' musical soundtrack. It's a movie that isn't afraid to have fun, and it does so with such an energy level that it's hard not to love this film, even if it does hang around for a few scenes longer than it probably should. The entertainment value of the movie combined with the extensive bonus features available on the included Blu-ray disc make this release Highly Recommended.