Duel in the Sun 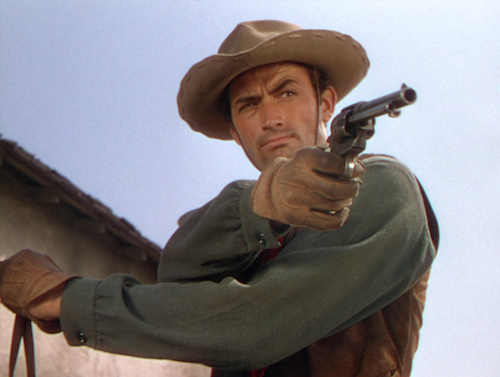 The western Duel in the Sun (1946) is producer David O. Selznick's famous attempt to reproduce, or even best, the success of his previous pet project, 1939's Gone With the Wind. Well, it's 70+ years later, and one of these films is considered a Hollywood classic and one of these films is consigned to footnote status. It shouldn't take too much guesswork to sort out which is which.

Now, I've been known to enjoy Gone With the Wind, but I tend to think of it as a well-crafted soap opera rather than something substantial that moves me. There's cool stuff in it, but, you know, it's overblown and junky too.

Duel in the Sun essentially doubles down on those overblown and junky inclinations. And that's not all for the worst. For example, the film's climactic scene, depicting the titular duel, is crazed melodrama at its most oddly exquisite. The flick is dotted with these brilliant oddball moments, but it's so overstuffed with spectacle (thanks to a half-dozen directors, including the credited one, King Vidor) that Duel doesn't necessary feel like it adds up to more than the sum of its parts.

Jennifer Jones and Gregory Peck are cast against type as, respectively, a fiery Mestiza who wants to be good, but can't help being bad, and a black-hearted cowboy who gets everything he wants, even if he has to take it by force. These two forces of nature are brought together when Jones's character, Pearl, is orphaned: her father kills her mother for sleeping around and then is hanged for the crime. Pearl is sent to live on a prosperous cattle ranch with a distant relative, Laura Belle McCanles (Lillian Gish), whose sons are Peck's character, Lewt, and Joseph Cotten's far more proper Jesse. There's predictable sibling rivalry between the brothers, as their father, the wheelchair-bound Senator McCanles (Lionel Barrymore), sees a bit of himself in the rascally Lewt and doesn't care much for Jesse's forward-thinking dealings with some railroad men who want to lay track on the Senator's land.

The brothers are further split apart once Lewt insinuates himself into Pearl's bed -- in a frank scene that made the film infamous in its time, earning the nickname "Lust in the Dust." From there, Pearl and Lewt's relationship is defined by animal desire and, alternatively, primal hatred. Both Jones and Peck, known for being much more "square" than this, are oddly up for the task. Jones uses her whole body to express Pearl's emotions, whether it be awakening lust or self-flagellating guilt, while Peck uses his imposing figure to evoke menace even when his character intends to be charming. He makes for a flat-out great, sociopathic heavy.

The rest of the leading cast all acquit themselves well. Cotten is a fine straight-arrow, as usual. Barrymore is a perfect blowhard. Gish is maybe Duel's secret weapon, providing the emotional center around which the rest of the film's shenanigans can unfold. Walter Huston has a fun two-scene role as a semi-unsavory traveling preacher that Laura Belle brings in to save Pearl's soul. Butterfly McQueen also appears, essentially reviving the role of Prissy from Gone With the Wind -- which was probably one of Selznick's less-good ideas. 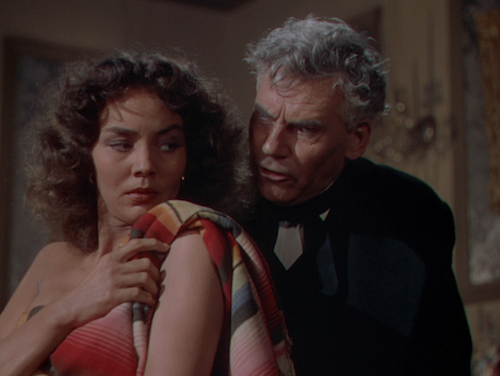 The Blu-ray
Duel in the Sun is presented in its uncut Roadshow Edition, with a Prelude, an Overture, and Exit Music. The cover art is reversible, with the vintage poster art on the outside and an evocative '60s-flavored variant on the inside.

The Video:
Disappointing, but not exactly bad. The AVC-encoded 1080p 1.33:1 transfer offers some dazzling moments of rich, vibrant Technicolor, but many scenes come off unexpectedly muted or even faded. At one point, the three strips that make up the Technicolor image appear to be misaligned, briefly creating an oddly psychedelic aliasing effect. The level of fine detail also fluctuates from scene to scene, and sometimes from shot to shot. No one would mistake it for SD, but the film probably deserves some more TLC than it received in this transfer.

The Audio:
Dimitri Tiomkin's score is the star of the DTS-HD MA 2.0 mono audio track. Lush and propulsive, it is usually well-supported here. Dialogue and effects are fine, if occasionally boxy. Like the video, it generally feels like there is room for improvement. An English subtitles option is available for your reading pleasure.

- Studlar is silent until the Overture starts, but oddly Kino hasn't provided a chapter stop there, so you have to fast-forward through the 10-minute Prelude to find the moment when she starts to talk. Once she does, though, Studlar does an excellent job of discussing the film's production history, thematic content, and cultural impact. It's well-researched, swiftly delivered, and consistently engaging. A strong compliment to the film.

Final Thoughts:
Duel in the Sun is too ambitious by half. It's certainly not a chore to sit through, thanks to a stacked cast and plenty of deliriously rendered setpieces. The spectacle overpowers the story, however, making it more noteworthy than essential. The info-packed commentary track is a must-listen for film buffs, so overall this disc comes Recommended. 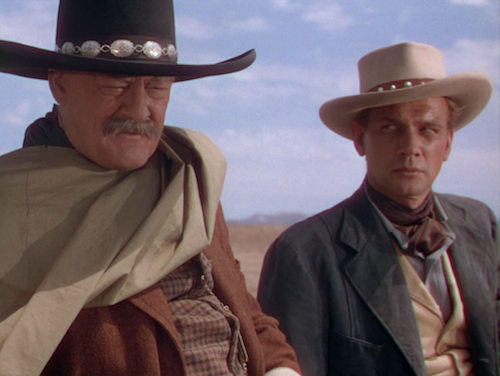