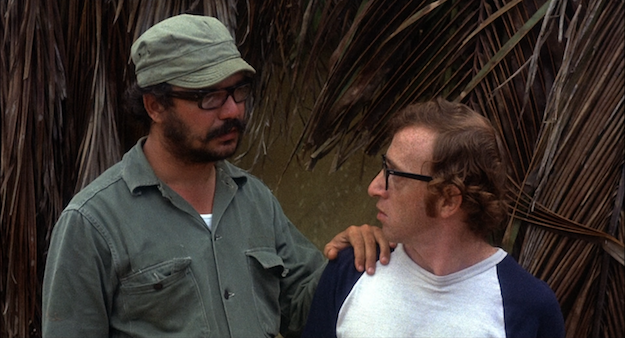 Comedy is not evergreen and not universal. This has been a hard lesson to learn as I've gotten older. Sometimes a 100-year-old slapstick film can still deliver gobs of belly laughs, while a successful comedy from 15 years ago can feel badly paced and out-of-touch. Sometimes someone whose intelligence you otherwise respect can tell you that Blazing Saddles isn't funny to them.

It's not fair, but that's how it goes sometimes.

I bring this up, partially to preempt any blowback from this next comment: I've always felt lukewarm toward Woody Allen's 1971 comedy Bananas -- which is widely considered his breakout film -- and a new viewing of Twilight Time's Blu-ray release hasn't changed my mind much. Bananas has the anarchic, spoofy, anything-for-a-laugh sensibility that would later be the stock-in-trade of the Zucker-Abrahams-Zucker team (Kentucky Fried Movie, Airplane!), but only two or three of Bananas' gags surprised and amused this reviewer enough to make me laugh out loud. More often, I was left with detached admiration for Allen's conceptual cleverness and the construction of his jokes -- which might be the ravages of time upon this film, or just the quirks of my taste.

That's not even to mention an early, off-the-cuff child molestation joke, which probably provoked shocked chuckles in '71. Now, with allegations of similar behavior against Allen inevitably lingering in viewers' heads, the joke just provokes shock. (A later gag where a fascist dictator lowers the age of consent raises red flags for the same reason, but oddly still plays pretty funny.)

The ramshackle plot of Bananas casts Allen as dissatisfied product-tester Fielding Mellish, who falls for an idealistic young woman named Nancy (Louise Lasser). One of Nancy's pet causes is the Latin American nation of San Marcos, which has fallen to a military dictatorship. After Nancy inevitably breaks up with Fielding for not being enough of a "leader," he travels to San Marcos to take his mind off of things. He finds himself taken in by a band of rebels after surviving a failed attempt by the government to create an international incident by killing an American -- that is, Fielding. A series of circumstances leads Fielding to become the president of San Marcos, even though it's up for debate whether he ever truly becomes a "leader."

The setting gives Allen a chance to appropriate the visual language of political thrillers of the time, like Z. (In fact, it almost anticipates Costa-Gavras's Uruguay-set thriller of the following year, State of Siege). But by defaulting to parody -- as Allen essentially does in Everything You Always Wanted to Know About Sex and Take the Money and Run too -- we're left with the impression of a filmmaker still in search of his own directorial "voice."

The bookending segments, with Howard Cosell calling the play-by-play of a political assassination and the consummation of a marriage respectively, might be two of the craziest, best-conceived moments in American film comedy. Casting African-American actress Dorthi Fox as FBI director J. Edgar Hoover is a similarly inspired bit of insanity. These are examples of the many good moments in Bananas. One just has to cherry pick them. 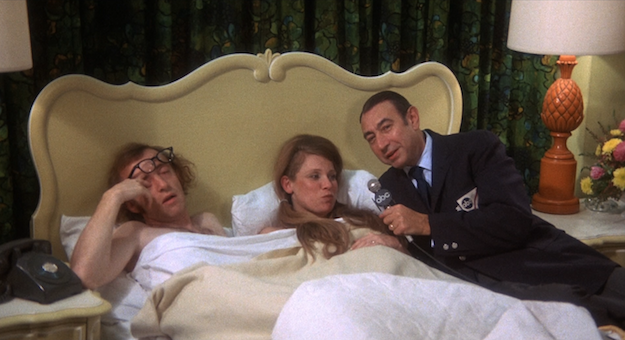 The Blu-ray
Bananas arrives in a limited edition of 3000 copies. It is packaged with a color booklet featuring a liner notes essay by Twilight Time's Julie Kirgo.

The Video:
Although director Woody Allen would soon make a point of working with the best cinematographers in the business, one suspects Andrew M. Costikyan was probably hired to be fast rather than good. Many scenes have a loose, improvised style, with wandering focus that gives the film an immediate, but overall soft appearance. This AVC-encoded 1080p 1.85:1 transfer is cleaner than, say, Twilight Time's release of Love and Death, but only sporadically does it look strikingly crisp and clear. Colors are strong and accurate-looking throughout; I don't have the DVD on hand to compare, but most of MGM's HD transfers of the Woody Allen catalogue (licensed to Twilight Time) have corrected a tendency to make the DVDs too red.

The Audio:
No major complaints from the DTS-HD MA 2.0 mono audio. Marvin Hamlisch's peppy, Latin-flavored score sounds full and forceful. Some occasional docu-drama ambience, but mostly this is a dialogue-driven film -- and the talk sounds fine. One subtitle option: English SDH.

I know there are many people who love Bananas. My feelings are much more measured. There are gags and full sequences that are great, but Woody Allen re-worked many of these ideas into his next few movies, to better effect. If you already love Bananas, this is a solid bare-bones (but region-free!) release you'll probably want to pick up. If you are coming to the whole thing fresh, then this disc comes lightly Recommended. 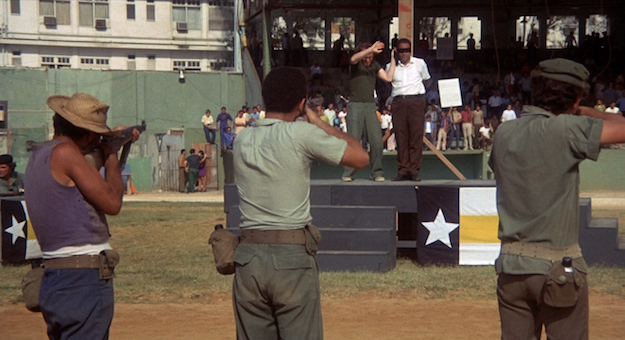