Streets of San Francisco - The Complete Series, The

The Streets of San Francisco (1972-77), previously available only as half-season sets, has been repackaged using the same masters, indeed the very same discs, as those releases, but at an astonishingly reduced price - currently around $50 for the entire series, versus $39 back in the day for just one of the half-season sets, or about 40 cents per episode.

As noted above, the show was the product of Quinn Martin Productions, whose other shows of the period included Cannon and Barnaby Jones, The Streets of San Francisco being the best of the three. It had two fine actors for the price of one, more attractive locations, and generally slightly better, more believable scripts. Cannon remains enjoyable mostly thanks to star William Conrad; that series was enormous fun when it stuck to hard-boiled private detective plots, but got awful silly toward the end, one episode even featuring aliens from outer space as potential murderers, zapping its victim from some distant planet. Barnaby Jones and its star, Buddy Ebsen, were just a bit too laid back for my tastes, and toward the end of its run Ebsen's co-stars ended up doing all the leg-work anyway.

This reviewer never had a chance to see the ABC series The Streets of San Francisco until the DVDs of the half-season sets. Our family TV, during the show's first season, was on Saturday nights from 9:00-10:00pm squarely fixed on CBS for The Mary Tyler Moore Show and The Bob Newhart Show. Despite such fierce competition, Streets did very well, lasting five seasons and 119 episodes (plus the pilot film), as well as a 1992 TV movie. As with other QM shows, its main attraction is its stars, acclaimed character player Karl Malden and up-and-comer Michael Douglas, son of Kirk, and its good use of San Francisco locales. This latter aspect, doing a cop show entirely on location was probably inspired by the success of Hawaii Five-O (the opening credits weakly emulate that series), while San Francisco had been something of a good luck charm for the genre after Bullitt (1968) and Dirty Harry (1971) were shot there. 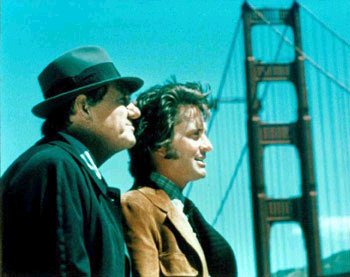 The intended crux of the drama was the father-son like partnership between Detective Lt. Mike Stone (Karl Malden, already 60 in 1972) and relative neophyte Inspector Steve Keller (Michael Douglas, then 28). Though Malden's character comes off more New York than west coast, he's entirely believable as a seasoned cop who knows every dark alley and lonely wharf like the back of his hand. Douglas' Keller learns valuable lessons from Stone's experience; at least that's the idea. Such relationships had long been popular in cop thrillers and Westerns as varied as Akira Kurosawa's Stray Dog (1949) and numerous "Hopalong Cassidy" pictures, as well as earlier cop shows like Adam-12. Initially, the two stars don't generate much chemistry, but by season two their relaxed relationship, Mike calling Steve "buddy-boy" constantly, and Steve kidding Mike about his diet, boring personal life, etc., ingratiates.

Malden was very good in just about anything he ever did (even those long-running American Express ads; as a company pitchman, he was an inspired choice*) and he frequently rises above the material. Though at the time few would have predicted Michael Douglas would become one of the major producer-movie stars of the 1970s through early-'90s, there are little flashes of the kind of intensity that would become his screen persona.

After Douglas' success as one of the producers of One Flew Over the Cuckoo's Nest, he left the series and was replaced by Richard Hatch (Battlestar Galactica). On those episodes the father-son dynamic is more pronounced. Hatch was only one year younger than Douglas but at the time still could have passed for a teenager.

After establishing the relationship between Mike and Steve the first season, for the second the series seemed to lean heavily more on plots about the "Streets" rather than the cops, with more screentime allotted to guest stars than Malden and Douglas, who at times do little more than swoop in at the end. The producers seemed aware of this and gradually more emphasis was placed on their relationship along with more hints about their personal lives.

The full frame format Streets of San Francisco looks great, bright with strong color and impressive clarity. Disclaimers note that "some episodes may be edited from their original network versions," but the shows I looked at seemed complete, unaltered, and not time-compressed. As with other CBS/Paramount complete series releases, they've adopted a 2/3 - 1/3 approach, cramming the first three seasons into one jumbo DVD case, and the last two seasons in a smaller, mid-sized model. The Dolby Digital mono is fine. The first two seasons included alternate Spanish audio and Spanish subtitles, but that was dropped for seasons 3-5.

Affection for The Streets of San Francisco grew steadily for this reviewer. I prefer Frank Cannon as a character, but The Streets of San Francisco holds up better today and the DVDs certainly are far superior, as CBS/Paramount really cheaped out on Cannon, using video masters from the 1980s (or earlier). This, however, looks great and for that price is definitely Recommended.

* I was once leaving a dim sum restaurant in West Los Angeles when I noticed Malden, by then in his nineties but looking much the same as he did on his TV show, patiently waiting to be seated. All around him people were whispering, "The American Express guy! The American Express guy!" Feeling a bit sorry for this lack of recognition of his long and prestigious career, I went up and told him how much I enjoyed his performance in Baby Doll (1956), which I was glad seemed to please him.