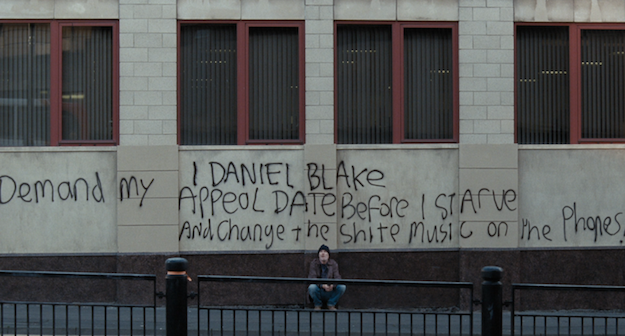 When a filmmaker creates a story of people trapped in the crevices of massive bureaucracies, there's a tendency among writers like myself to describe those stories as "Kafkaesque." Kafka's The Trial, after all, is the granddaddy of these stories: full of uncanny dread and surreal horror, it follows a main character who waits for the powers that be to rule on his case, even though he has no clue what the charge is.

The description of Ken Loach's newest film, I, Daniel Blake, would most assuredly lead one to think we're in Kafka territory. Sixty-year-old Daniel Blake (comic Dave Johns in his film debut) is a carpenter who has had a heart attack on the job. When the film begins, he is recovering, but his doctor doesn't think he is well enough to go back to work. The welfare office, which has no medical expertise, disagrees. They refuse him a disability benefit, but tell him he can appeal. The office's foreboding-sounding "decision maker" will let Daniel know how the appeal goes, but there is no set timetable. In the meanwhile, if Daniel wants to prove himself worthy to receive any money to live on, he has to search for work for at least 35 hours a week. Even though his doctor has told him not to work at all.

The logic of this situation will do your head in. Sadly, Loach's film offers no surrealism to provide viewers with intellectual detachment from Daniel's story. As befits the politically steeped filmmaker's track record, I, Daniel Blake is painfully realistic (and one suspects, sadly accurate). Daniel's journey involves navigating surly welfare workers, his own computer illiteracy, and, you guessed it, a lack of open jobs. In one scarring scene, Daniel receives a call from an employer who likes his resume and wants to take him on; when Daniel admits he can't work but that he has to look for work to satisfy the government's requirements, the man with the job chews him out for being a no-good loafer.

Daniel's story is complimented by that of a single mother he meets at the welfare office, Katie (Hayley Squires). Daniel has lost his wife and has never had any kids, so he welcomes the chance to be a semi-grandpa to Katie's two young ones. Katie doesn't have a job or very much money, but wants to give her kids a good life. In a telling moment, she makes Daniel a plate of food to thank him for working on her family's new apartment but only eats an apple for her own dinner. The grim pay-off to this scene comes later when Daniel accompanies the family to a charity food bank, and Katie is compelled to open a can of beans and start scooping them into her mouth on the spot. She is immediately embarrassed that the hunger has gotten to her; the food bank workers and Daniel are heartbreakingly understanding. When Daniel asserts, "This isn't your fault," I must admit that I busted out sobbing.

That scene, apart from how affecting it is, points to one of Loach and screenwriter Paul Laverty's main ideas: you mustn't abandon your humanity in the midst of inhumane circumstances. The film is loaded with scenes of Daniel or Katie hitting bureaucratic brick walls as the people who are supposed to be helping them, choose to maintain order and enforce cold, sometimes nonsensical regulations instead.

Loach and Laverty are rarely subtle in their assertions that the system is only making things worse for these poor people -- with a potential cost of human lives. Some scenes and portions of dialogue are almost Brechtian in the way they flatly describe what the filmmakers see as the flaws in the British welfare system. But Loach's genius is revealed in his casting and his approach to these characters. There's a clear fondness for Daniel, and Katie's family, and even Daniel's next door neighbor, who is scheming to make it out of public housing by selling discount sneakers he buys straight from the Nike factory in China. Loach is invested in this world, which makes us invest in it. The actors are typically so natural that we might have a hard time believing they are not the people they're playing. Loach uses the story to make a political point, but viewers aren't left feeling manipulated. We're made to share in the sorrow and anger that the filmmakers clearly feel as well.

The conclusion of the film portrays a downbeat irony that reminds us again of our old friend Kafka, but somehow Loach's vision is more optimistic. Sure, the system is horrifically broken, but, if we can restore humanity in dealing with these problems, maybe it's not irrevocable. 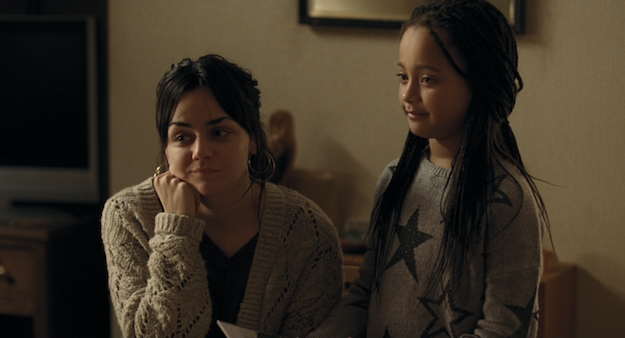 The Blu-ray
I, Daniel Blake is packaged with a fold-out featuring an essay by Girish Shambu.

The Video:
Like many of Loach's films, I, Daniel Blake has a cool, grey look that gives the urban setting a hard bleakness. Criterion's AVC-encoded 1.85:1 presentation is excellent in reproducing the effect. A high-bitrate encode, well-resolved film grain (yup, this was shot on film), and no discernible damage.

The Audio:
Like most modern films, I, Daniel Blake has been presented with a DTS-HD MA 5.1 surround mix. As expected, though, this intimate film isn't particularly flashy when it comes to utilizing the who soundstage. Nonetheless, a suitably realistic atmosphere is created. Optional English subtitles are also available.

- Loach and Laverty mostly discuss the real-life stories they researched which inspired their film.

Final Thoughts:
Winner of the 2016 Cannes Film Festival Palme d'Or, Ken Loach's I, Daniel Blake is a humane, depressing, infuriating drama about the welfare system in England. The natural and engaging performances make the story's occasional didactic moments easy to forgive. This one will stay with you after it's over. Highly Recommended. 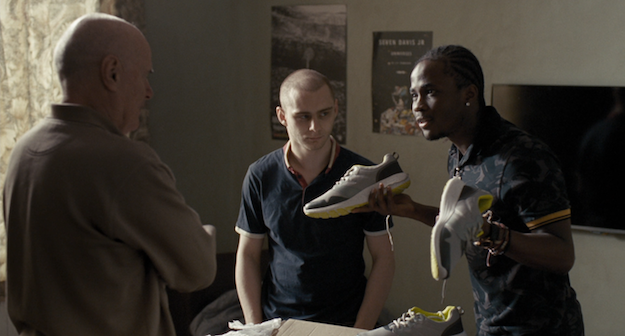