Redemption Films // Unrated // February 6, 2018
List Price: $29.95 [Buy now and save at Amazon]
Review by Stuart Galbraith IV | posted February 13, 2018 | E-mail the Author
It seems every time I review a movie directed by Jess Franco, a boilerplate preface of sorts is in order. In recent years some critics have become enamored of the late filmmaker's prodigious output, some 160-200 features (no one seems to know for sure) which began as an assistant director in Spain in the mid-1950s and lasted until his death in 2013, with his final work, Revenge of the Alligator Ladies, released posthumously. For the last dozen or so years of his life Franco had been reduced to features shot on video rather than film, titles like Dr. Wong's Virtual Hell and The Killer Barbys vs. Dracula, genre exploitation sometimes bordering on porn, the kind of thing Ed Wood would likely have been making were he still around.

But even long before that, Franco's career trajectory seemed to be going in the opposite direction of most filmmakers. Most great directors start out well and get better, peaking somewhere past mid-point or even near the end of their careers rather than at the beginning.

Franco went in the other direction. His movies from 1961 through 1966 generally exhibit a great deal of thought, imagination, and competence. Though derivative genre pictures, they're reasonably well made considering their low budgets and are even fun. Almost mysteriously, around 1968, a year when he directed nine theatrical features (!), Franco's movies took an inexplicable downward turn. His supporters would argue that his signature look, such as his roaming, seemingly unmotivated use of zoom lenses, often out-of-focus shots, shaky hand-held camerawork, and the general shoddiness of his pictures were evidence of some kind of outlaw master filmmaking, a kind of Godard of Sleaze. Others, including this writer, believe Franco was simply inept, or more precisely didn't care that his movies appeared incompetent, that steady employment superseded whatever artful ambitions he might once have had. Clearly he was an intelligent man making highly unintelligent junk, but once a new wave of critics embraced him as a great artist, who was he to argue?

The Diabolical Dr. Z (1966), a French-Spanish co-production released in Spain as Miss Muerte and France as Dans les griffes du maniaque (though the Blu-ray bears another French title, Le diabolique Docteur Z), is maybe Franco's most competently imaginative and entertaining feature. I first saw it via Mondo Macabro's excellent DVD from 2003 and, watching it again, I was fairly flabbergasted by just how much imagination Franco puts into nearly every sequence. The screenplay, by Franco and esteemed writer Jean-Claude Carrière (Belle de Jour, The Tin Drum, The Unbearable Lightness of Being) unabashedly steals from all over the place, but with an undeniable flair. 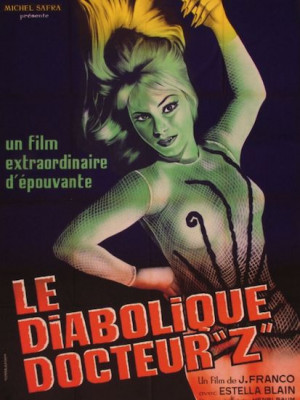 Accompanied by loyal adult daughter Irma (Mabel Karr), Zimmer arrives uninvited at a prestigious scientific conference, where three colleagues in particular scoff at Zimmer's request for formal approval to experiment on human subjects. (Why does he even bother, given the business with Hans Bergen's transformation into a veritable Charlie von McCarthy?) Dr. Z doesn't take the scoffing well, dropping dead from a seizure.

That might be the end of the story, but mad Irma is determined to wreak vengeance on the three pooh-poohers, including Franco regular and sometime Dr. Orloff, Howard Vernon. Irma fakes her own death by mowing down a physically similar young hitchhiker with the Zimmer Mercedes (Irma burning her face in the process), and she kidnaps an exotic dancer, Nadia (Estella Blain), zombifying her and setting her loose upon the three men.

The Diabolical Dr. Z draws its inspiration from just about everywhere, from the krimi Dr. Mabuse and Edgar Wallace films popular in West Germany at the time to Georges Franju's Eyes without a Face (1959) and Judex (1963). The basic plot is similar to the 1940 novel The Bride Wore Black, formally adapted by Truffaut the following year. Irma, for instance, is cut from the same cloth as Alida Valli's character in Eyes without a Face, fiercely loyal to the mad doctor character, who kidnaps young women. There's an emphasis on surgical horror like that film, with Irma exhibiting heretofore-unknown plastic surgery skills on herself. Like the Edgar Wallace films there are two eccentric detectives assigned to the case, played by Franco and Daniel White, the latter even from Scotland Yard, whose Englishness, like the Edgar Wallace movies, are a source of comedy. Nadia, known professionally as "Miss Death," wears a skin-tight body stocking and grows "magnificent[ly long] fingernails," which offscreen Irma has dipped in poison. Her outfit recalls the villainess is Franju's delightful Judex.

To his credit, Franco directs each and every scene with considerable flair, no matter the frequent ludicrousness of what's onscreen. Even stock sequences like a climatic fight between Nadia's beau, Philippe (Fernando Montes) and Bergen demonstrate that Franco was in there slugging, trying to distinguish each moment with interesting camera angles and lighting. The cinematography by Alejandro Ulloa is excellent, far better than the work found in any other Franco film I've seen.

Mondo Macrabo's DVD was great for its time, but the new Blu-ray is almost a revelation. The 1.66:1 widescreen presentation is nearly flawless, with deep blacks and super-sharp resolution. The mono French audio with English subtitles plays better than the English-dubbed version, which misses important bits and pieces from what I could tell. Region "A" encoded.

An entertaining trailer, also in high-def, is included, but the big supplement is the audio commentary by Franco expert Tim Lucas. As usual he packs his commentary with scads of background information and makes a passionate, informed defense of Franco, even for those who'll disagree. It alone is worth the price of the disc.

Enormous fun and a good way to ease into Franco's oeuvre, The Diabolical Dr. Z is Highly Recommended.