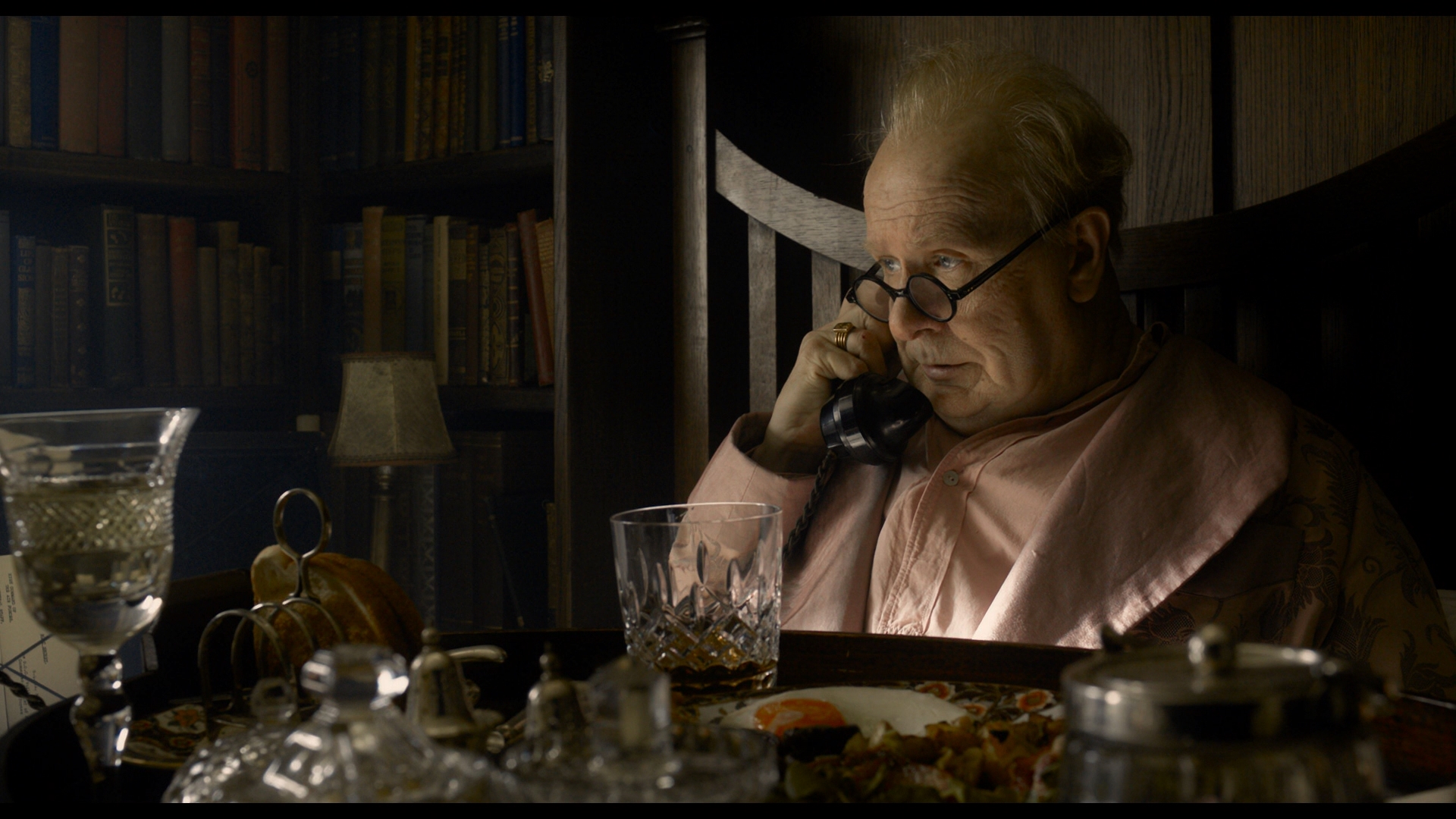 I'm now convinced that Gary Oldman can play any part thrown at him. From Lee Harvey Oswald to Dracula to George Smiley, Oldman disappears into his characters and you forget you're watching someone act and believe you're watching the person he's playing. That's never been more true of Oldman in the role of Winston Churchill in Darkest Hour. In a role that almost certainly will result in his first-ever Oscar, Oldman becomes Churchill and it's far more than a simple impersonation - he embodies all the qualities (both the good and the bad) of one of Great Britain's...and indeed, the world's...greatest leaders.

Director Joe Wright's latest movie only covers about a month of Churchill's life, but in many ways these are the most important days of his existence. It is May 1940, and the German war machine has invaded Western Europe and both France and Belgium are on the brink of surrender (Belgium does before the month is over). British Prime Minister Neville Chamberlain (Ronald Pickup) has lost the support in Parliament and is forced to resign. His replacement: Winston Churchill, a fellow conservative frowned upon by many members of his own party, both for his hawkish views of the war and for a former disaster in World War I (when Churchill was Lord of the Admiralty - equivalent to the U.S. Secretary of the Navy) where he made a decision to attack Turkey (at Gallipoli) and Allied troops sustained about a quarter-million casualties (including about 46,000 deaths).

It's the distrust of Churchill as a leader that is the driving force of Wright's movie. In hindsight, every viewer watching knows that Churchill is right about Hitler not willing to negotiate for peace, but many in England actually thought he would at the time and Churchill faced enormous pressure to barter a deal with the Nazis. As for the United States, in 1940 they wanted nothing to do with the war overseas and Neutrality Acts were in effect that prevented them from lifting a finger to help their British brothers (in one heartbreaking scene, Churchill has a conversation with American President Franklin Roosevelt on the phone, where Roosevelt tells him the only way he can get access to planes in the United States that the Brits already paid for is if he has horses pull them across the Canadian border).

There are a handful of characters that Churchill interacts with that help viewers better understand what kind of man he is. Through one of his secretaries, Elizabeth Layton (Lily James), we learn how demanding and short-tempered he can be...although later on, when he learns Layton's brother was killed in the war, how father-like and caring. Through his wife, Clemmie (Kristin Scott Thomas), we learn of his loyalty to those he cares about...but also that it's politics, not necessarily her, that Churchill is really married to. Then there's his relationship with King George VI (wonderfully played by Ben Mendelsohn), a man more powerful than Winston, but one who fears him at first. Later on, it's the support that Churchill receives from the King that helps solidify his resolve.

I don't know if Darkest Hour achieves becoming a "great" movie - it's perhaps a little too by-the-numbers and, of course, required to hit all the historical highlights. There are some moments where the movie does take some liberties with the truth, such as a scene late in the film where Churchill meets with "common folk" on the London Underground. Churchill gets inspired by the Londoners on the train and then goes off to make his famous "never surrender" speech in Parliament. The scene, which never happened in real life, is naturally exactly the kind rousing moment that viewers will remember most from the movie. It's a shame that Wright feels the need to fabricate what's already a great tale, but moments like this keep Darkest Hour from being a movie that is anything beyond "really good."

But nitpicks aside, the real reason to see this film is for the outstanding performance by Gary Oldman. He seems born to play Churchill, but then again Oldman seems born to play just about every role he tackles. It's hard to imagine another actor taking on the part in any other Churchill movie anytime in the near future. For those reasons alone, this release comes highly recommended.

Darkest Hour arrives on home video in this Blu-ray/DVD/Digital HD combo pack. The 50GB Blu-ray and dual-layer DVD are housed inside an eco-LITE Vortex keepcase along with an insert containing a code for a digital copy of the movie. A slipcover with artwork matching that of the keepcase slides overtop. Both the DVD and the Blu-ray are front-loaded with an anti-smoking ad (because Churchill loved to smoke, and Universal doesn't want you to emulate that aspect of him), plus trailers for Phantom Thread, All I See is You, and The Man Who Invented Christmas. The Blu-ray menu is the standard Universal design, with a still of Gary Oldman as Churchill and menu selections vertically down the left side of the screen.

Darkest Hour was shot digitally on both the Arri Alexa mini and the Arri Alexa SXT Plus and is presented on home video in its original theatrical aspect ratio of 1.85:1. The overall look of the movie sticks with muted colors in order to give the film a historical look, but that doesn't mean it lacks detail, which is pretty sharp throughout. There are hints of noise in some of the movie's darker moments (of which there are many), but never to the point of distraction. I detected no problems with aliasing or banding in the image. Skin tones are consistent and realistic - and even with this sharp transfer, you'll be hard-pressed to find any flaws in Oldman's make-up job. A very nice transfer for a very good movie.

Darkest Hour was released in theaters with a Dolby Atmos track, and I'm happy to report that Universal has decided to release the Blu-ray with an Atmos track as well. You might think that Darkest Hour is largely a "talking heads" movie, and that's true for a large part of the presentation. But there's also a glimpse or two of the war front throughout the movie, including a couple of bombing sequences that take advantage of the Atmos track. Dialogue is crisp throughout, and the mix here is well done - even in its most powerful aural moments, the spoken word is never drown out by all the ambient sounds.

In addition to the Dolby Atmos track (which down-converts to a 7.1 Dolby TrueHD track for those without Atmos home theaters), a 7.1 Spanish Dolby Digital track and 5.1 French Dolby Digital track are also available, as is an English DVS (Descriptive Video Service) track. Subtitles are an option in English SDH, Spanish, and French. 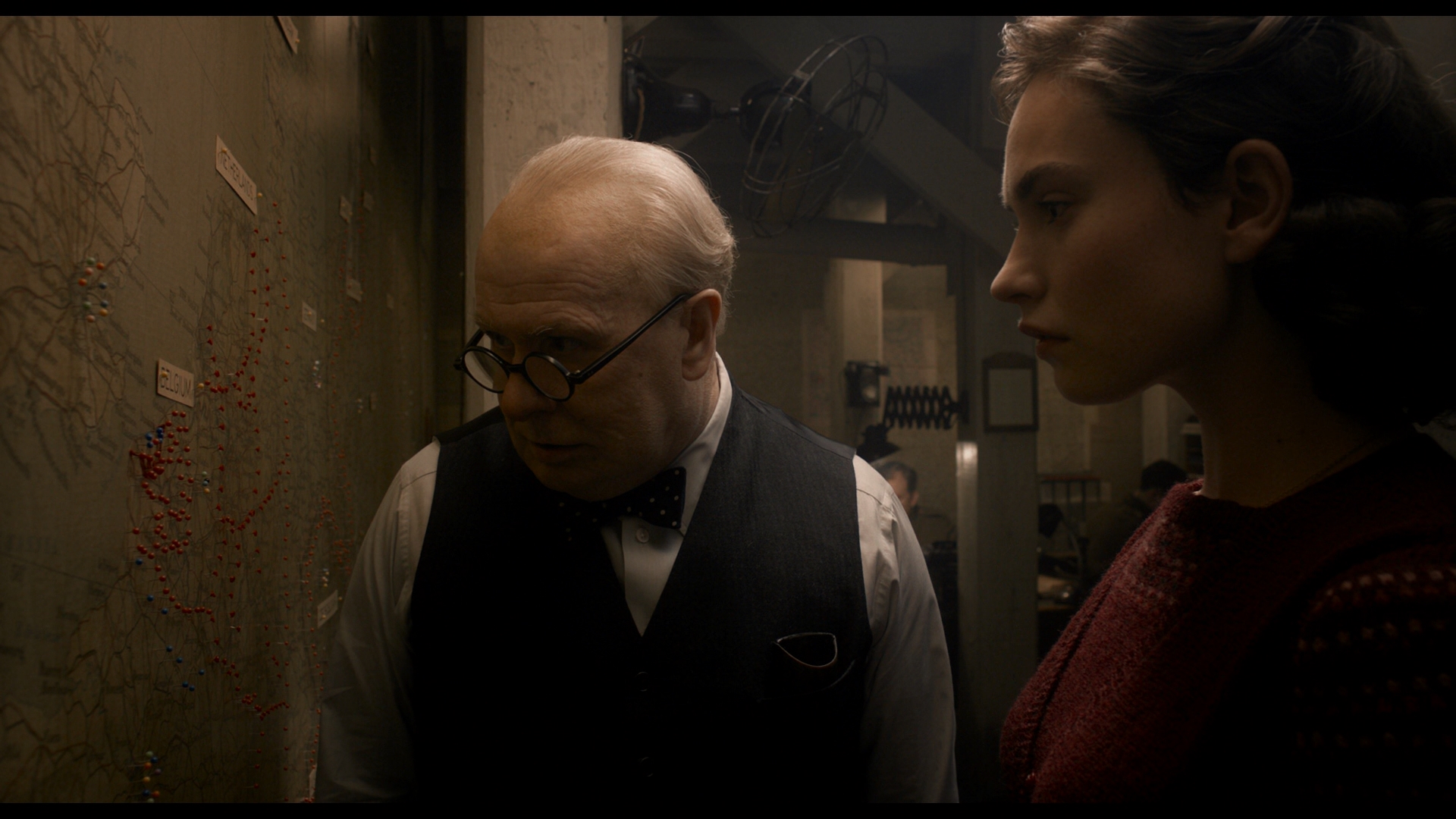 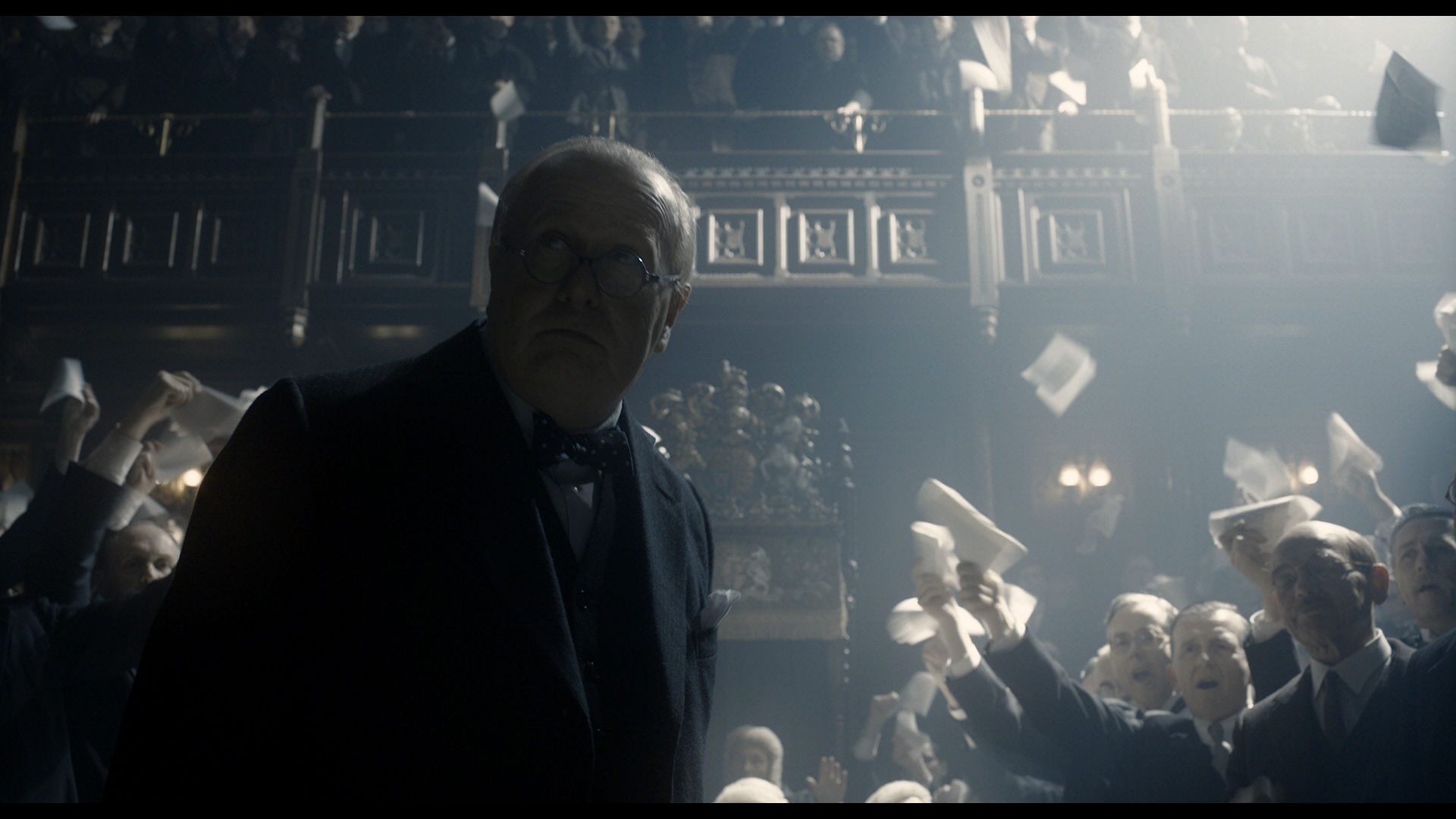 While Darkest Hour may not be the most complete look at the life of Winston Churchill (as it only covers about a month of his life), it's hard to believe a better movie will be made about the man. Gary Oldman is simply electric in the role, giving a great performance as one of the most important men in world history. Highly Recommended.