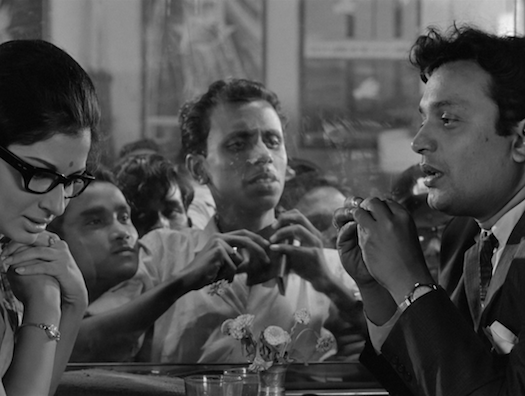 Bengali master filmmaker Satyajit Ray details the existential and professional crisis of a beloved matinee idol in 1966's The Hero (Nayak). While the film owes a few debts to the crises, reveries, and nightmares uncovered in Bergman's Wild Strawberries and Fellini's 8 1/2, Ray demonstrates a unique ability for digging deep into his main character in a way that not only exposes him, but adds layered complexity which humanizes and demonizes him at the same time.

Uttam Kumar plays the titular "hero," Arindam Mukherjee, whose onscreen work typically casts him as an unassailable, hyper-competent golden boy. In real life, Arindam has just gotten into a drunken fistfight that has leaked its way into the newspapers. At the same moment, Arindam is set to receive a big-time award in Delhi. He can't score a plane ticket for the thousand-mile trip, so he takes the train.

In the first third of the film, Ray builds the world of the train into a charming microcosm of middle-class life. Passengers gossip and react to the presence of a megastar in their midst. Housewives become coquettish, old men become indignant. In this midst of this ensemble is Aditi Sengupta (Sharmila Tagore), a young intellectual who is trying to get a women-driven magazine off the ground. She is indifferent to "hero" Arindam, as she catches a whiff of bullshit off of him, but she is convinced that an interview with a giant film star might improve her magazine's circulation.

Ray's touch is so light in the early going that one can be forgiven for expecting that this is headed in the direction of a romantic comedy, in which the wounded rake and the head-strong independent woman figure out that they are made for each other. There is chemistry there, but it only helps to inform the surprising and darker direction in which Ray pulls the film.

The change is triggered by a dream sequence. At first, it starts as a goofy lark, with Arindam playing like a child, in a landscape made entirely from mounds of money. But soon, skeletal hands reach up from the mounds of money, spoiling the landscape. The money turns into quicksand, and soon, Arindam is trapped. He reaches for help from a mysterious figure, but he is quickly consumed.

That figure, it turns out, is Arindam's artistic mentor, who disdained the cinema and felt the only way to connect with an audience is through the theater. However you feel about this rivalry -- and let's be clear, Ray is clearly ambivalent about it himself -- Arindam views it now as a betrayal between friends. This triggers a series of flashbacks and visions about Arindam's other betrayals, vendettas, and abuses, in pursuit of power.

Uttam Kumar, who was already a legendary Bengali star when The Hero was made, beautifully embodies a man who suddenly feels like his place in the world is far more fragile than it has ever been. At first, he swaggers and smiles his way through the train, as if he owned every car. But all that drops away and we see honest confusion and fear, as Arindam remembers turning his back on a political activist friend for fear of bad PR or reflects upon an ill-advised tryst with a wannabe actress. He feels the pedestal upon which he is standing ready to topple at any moment.

Ray also implicates other people on the train for having the same power-hungry weakness. A major subplot involves an advertising man who is so hungry to woo a powerful corporate boss that he entertains the notion of pimping his wife. The punchline is even more bitter: she will do it, if the ad man will talk to Arindam about getting her into movies.

Even the journalist, Miss Sengupta, finds herself drawn in to Arindam's gossip of things he has done wrong. One can see her picturing the subscription money rolling in, as she discreetly transcribes the big star's seedy confessions. But Sharmila Tagore's sweet and forthright performance allows us to hold out hope for Miss Sengupta, that she might transcend such base instincts and not get pulled into the fame game.

Like its main character, The Hero is a film that reveals more layers and grows more compelling and honest as it goes along. We've seen stories like this told on screen before, but usually with more detached cynicism. Ray's film has its share of cynicism and satire, but it is in service of a heartfelt and humane point-of-view. That makes all the difference. 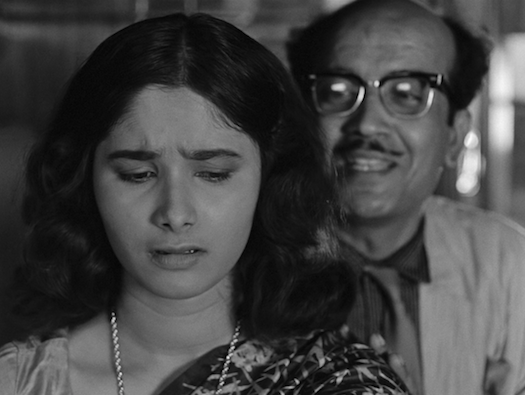 The Blu-ray
The Hero is packaged with a booklet featuring an essay by Pico Iyer, plus a eulogy for Uttam Kumar, given by Satyajit Ray in 1980.

The Movie:
Another beautiful transfer from Criterion. The AVC-encoded 1080p 1.33:1 image is sourced from a 2K scan. The level of fine detail is high; certain shots suffer from imprecise focus-pulling, but this is clearly a product of the original production. Rich black levels and a well-defined range of contrast. Minimal film damage, well-resolved film grain, and no noticeable compression issues.

The Audio:
The Bengali (and sporadic English) LPCM mono audio (with optional English subtitles) has been cleanly restored, but the original mix is fairly limited. Scenes on the train typically sound pretty good, with clear dialogue and noticeable ambience. Scenes in Arindam's home, however, sound echo-y and weak. Satyajit Ray's musical score integrates well into the mix but doesn't come through as full-bodied as one might expect.

(HD, 11:53) - Recorded in 2008, this interview with lead actress Tagore covers the working dynamic between her and director Ray (he first cast her when she was 13, in the third Apu film, Apur Sansar), as well as her feelings about Ray's honest storytelling style.

Final Thoughts:
The Hero examines the Faustian bargain that artists make to become beloved, and it is as masterful a work of film storytelling as Satyajit Ray's better known films. By turns charming and harrowing, this is a satisfyingly layered character study that ends somewhere quite different from where it begins. Criterion hasn't loaded the film down with tons of extras, but the ones presented make up in quality for the lack of quantity. The restoration work is striking as always. Highly Recommended. 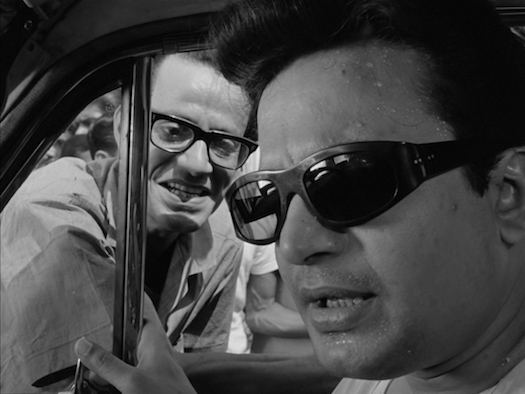