Mill Creek // Unrated // March 6, 2018
List Price: $14.98 [Buy now and save at Amazon]
Review by Stuart Galbraith IV | posted March 12, 2018 | E-mail the Author
A real bargain ($8.11 as I write this) for this Hammer Films Double Feature, Mill Creek's release of Never Take Candy from a Stranger (1960) and Scream of Fear (1961) is a great opportunity for those who enjoyed Sony's earlier "Icons of Suspense" DVD boxed set to upgrade, while first-time viewers can enjoy a real treat, two outstanding, very different films from the modest British film company for practically nothing. 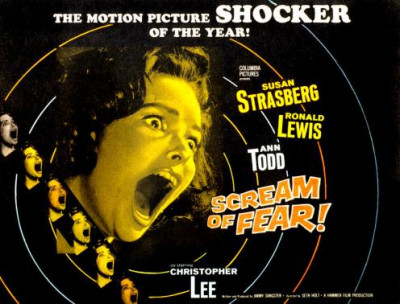 With Never Take Candy from a Stranger (original British title: Never Takes Sweets from a Stranger, 1960), Hammer tries to have it both ways: make a deadly serious, nearly uncompromising drama on a taboo subject nevertheless a serious social problem, but also make something suitably marketable. They succeeded in the former but not the latter. The movie itself is anything but lurid exploitation, but advertising suggested a crime thriller somewhere between the studio's own Jimmy Sangster-penned thrillers (like Scream of Fear) and perhaps on some level the Merton Park's popular Edgar Wallace Mysteries then in vogue.

Like cancer, pedophilia was a subject that just wasn't discussed in polite company in those days, let alone the subject of a mainstream movie. Instead of helping improve image-conscious Hammer and its ambitions for occasional Serious Stuff, the film was met with hostile reviews and negligible box office. Thirty years later, in retrospectives in the U.S. and Britain, Never Take Sweets from a Stranger was reassessed and it's now rightly hailed as a minor masterpiece, a remarkably frank and honest production.

The story takes place in Canada. Whether this was an attempt to avoid censorship problems (like Italian movies about Catholic concerns which invariably seem set in France), or accurately reflecting Roger Garis's original story, The Pony Trap, is unknown to this reviewer. Regardless, the Canadian setting creates some awkwardness here and there, mostly having to do with accents. Irish character actor Niall MacGinnis, playing a defense attorney, speaks with one that doesn't sound Canadian, Irish, English, American or anything else identifiable. This is, however, a minor complaint.

Married Brits Peter (Patrick Allen) and Sally Carter (Gwen Watford), along with Martha (Alison Leggatt), Sally's mother, and the couple's their nine-year-old daughter, Jean (Janina Faye, the little girl in 1958's Dracula), emigrate to Canada by way of Toronto, landing in a tight-knit community where Peter is appointed principal of the local high school.

Soon after arriving, Jean and her friend, Lucille (Frances Green), are playing in the woods and Lucille suggests they visit the remote house of an elderly man known to offer the local children candy. Later, Jean's parents and grandmother are quietly horrified when the girl cheerfully tells of the old man who gave them candy after first having them strip and dance naked while he watched.

Appalled, Sally's first thought is to immediately call the police, but Peter is initially cautious. They're outsiders, uncertain of the validity of Jean's story, and concerned what impact it might have on his new job and standing within the community. However, previously cheerful Jean lets out a bloodcurdling scream from her bedroom, hallucinating that the old man is in her closet, an experience that today might be called post-traumatic stress. Peter no longer hesitates.

However, Police Chief Hammond (Canadian actor Budd Knapp) is curiously dismissive of Jean's claims and pressures the couple against filing a criminal complaint. Turns out that's because the old man is Clarence Olderberry Sr. (Felix Aylmer), the town's founder, while his son, Junior (Bill Nagy), uses his wealth to protect him from prosecution. Peter and Sally quickly learn that Clarence has crossed the line with other local girls before, and at one point had been "sent away" for a time, but that Junior's threats and Hammond's unhelpfulness have discouraged other outraged parents in the past.

Never Take Sweets from a Stranger is, even now, pretty harrowing, this despite the fact that, tastefully, the sexual assaults at the beginning of the story aren't shown, only discussed after-the-fact, and it's made clear Clarence did not even touch them. (Spoilers) However, late in the film Clarence, having avoided a conviction, again threatens two girls in a foot chase through the woods. They try to escape by rowboat, a sequence directed by Cyril Frankel but worthy of Hitchcock, and later hide in a cabin, with tragic results. Only the aftermath is glimpsed but the long last act is squirmily despite its relative tameness.

Felix Aylmer was a stage and screen actor who so specialized playing lofty, dignified authority figures that he became an archetype in popular British culture, with comedians imitating him for laughs while sitting judges subconsciously parroted his performance style. In Never Takes Sweets from a Stranger he utters not a single word of dialogue and yet his wide-eyed feebleness (he was 71 at the time) - he practically drools like a sick dog - uniquely add to his believable menace.

In this post Harvey Weinstein age, the film is even more impressive and timely. A crime that would be difficult for a family to endure under normal circumstances is greatly compounded by the pressure people in power like Olderberry Jr. and Hammond hold over their heads. This power and pressure may be channeled through the parents rather than directly at the victim, but it's much the same. Peter's future, indeed the family's economic livelihood is threatened, Junior making a veiled threat that Peter would be blackballed, unable to find employment anywhere in Canada; conversely, he offers, a lifetime of gainful employment is dangled before him should the parents drop the charges.

Likewise timely, there's a subordinate theme of xenophobia, with everyone protecting the old man implying that the Carter family's claims shouldn't be taken seriously. They are, after all, outsiders, newcomers. One implies bad parenting for not keeping Jean away from such an infamous local character, even though they had no awareness of Olderberry until after the attack. The defense attorney (Barrister? How do these things work in Canada?) goes so far as to suggest the couple are perverted themselves, all because Jean admits to having appeared nude before her father while coming from the bath.

Effectively photographed (in 2.35:1 Megascope) by Freddie Francis, the picture finds a nice balance between realism and stylization. Patrick Allen and especially Gwen Watford are outstanding as the parents, though the supporting performances, a mix of expat Canadian and American actors jumbled with British ones with fake accents, are variable. 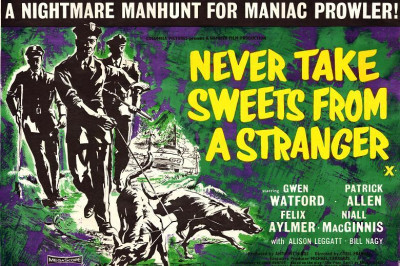 Scream of Fear (original British title: Taste of Fear, 1961), was one in a long line of Hammer thrillers, most written by production manager-turned-screenwriter (and later director) Jimmy Sangster. Hammer had made some interesting, low-budget noir-type thrillers in the 1950s, usually starring an imported minor American star like Dane Clark or Dan Duryea, but Sangster had a real knack for the genre, which peaked during the 1960s.

Sangster had been greatly impressed by Henri-Georges Clouzot's Diabolique (1955), and he liked to joke that his thrillers were all basically reworkings of the French film classic. That's true to a point; they all have structural similarities to the Clouzot, but Sangster was clever enough to understand what made that picture tick, while shuffling around characters, situations, and plot twists so that his thrillers, the best ones, seemed original. Taste of Fear is perhaps the best of these, though the similar Paranoiac (1962) is about equally fine; Nightmare (1964) and The Nanny (1965) have many fine moments, and Fear in the Night (1972), which Sangster also produced and directed, is better than its reputation.

Taste of Fear opens with the discovery of a woman's corpse in a lake, a sequence that doesn't make sense until the movie is nearly over. Later, Penny Appleby (Susan Strasberg), paralyzed from the waist down, arrives in France to reunite with her remarried father, whom she's not seen in ten years. However, Robert (Ronald Lewis), the chauffeur, informs her that her father is away on a business trip.

At the large estate on the French Riviera, Penny is greeted by her stepmother, Jane (Ann Todd), and later to mildly sinister family friend Dr. Gerrard (Christopher Lee). That night, across the terrace in the long-closed summerhouse, Penny sees a light burning and, wheeling herself there, is horrified to find her father's corpse, seated with his eyes open. In a panic she and her chair fall into the murky, seaweed-filled pool but Robert rescues her.

No one believes her story, and after she sees the footloose corpse again, this time in her bedroom, Jane and Dr. Gerrard begin to think her mad. Robert, however, suggests to Penny - she by this point already attracted to him - that together they try to locate the missing corpse before it disappears for good and Jane and Dr. Gerrard get away with murder.

Sangster felt Taste of Fear was the best of his psychological thrillers for Hammer, and co-star Christopher Lee went even further, naming it as the finest film Hammer ever made. (The prestige quotient, raised by the presence of Ann Todd and Susan Strasberg, was, presumably a factor for Lee.) The picture was met with mixed-to-positive reviews and strong box office, a rarity among Hammer's prolific long-term deal with America's Columbia Pictures.

The movie delivers the goods. There are several big shock-scares, and the multiple twists in its last quarter-hour are very clever, even if those familiar with Diabolique and other such films can figure out where everything's heading before the climax. Former Ealing Studios editor Seth Holt directs the film with an eye for cutting, apparent in the film's climatic moments; he might have enjoyed a major career had alcoholism not claimed him before he was fifty.

Both pictures run under 90 minutes and fit just fine on the single disc. Never Take Sweets from a Stranger, presented under its American title with some minor changes, looks great in crisp black-and-white and 2.35:1 ‘scope. Taste of Fear, likewise presented under its American title, is problematic. Mostly it looks okay, but the image is a trifle soft and rather dark. The audio, too, seems slightly off; the dialogue is mixed very low but screams are deafeningly loud and the music track, to this reviewer's ears, sounded mildly distorted. It's not a deal-killer and definitely better than the older DVD version and perfectly watchable, just not as pristine as one might have expected. English subtitles are offered on this region "A" disc. No Extra Features.