Good Fight: Season One, The

Paramount // Unrated // March 13, 2018
List Price: $24.33 [Buy now and save at Amazon]
Review by Stuart Galbraith IV | posted April 17, 2018 | E-mail the Author
Some explanation required here. My wife, Yukiyo, was a binge-watching fan of The Good Wife, the 2009-2016 legal-political drama series starring Julianna Margulies. On her days off from work her eyes would be glued to her laptop for hours, watching five or six episodes, one after the other. I only caught bits and pieces of that show, but when the spin-off The Good Fight (2017-present) fell into our unloved DVD screener pool I knew I had to review it, if only so that Yukiyo could see it.

And yet, despite never having watched a single entire episode of The Good Wife I'm finding The Good Fight engrossing entertainment, and that minimal conferring with Yukiyo during the first episode was enough to satisfy my curiosity about The Good Wife's connections to its follow-up.

However good The Good Wife is, The Good Fight stands on its own terms. Though relegated to CBS All Access, it enjoys high-end production values, and is savvy and smart, as well as unexpectedly topical. 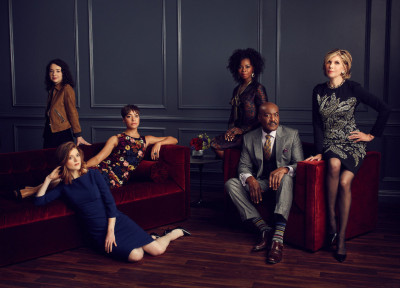 The series won me over nearly from its opening shot, a close-up of powerful Chicago attorney Diane Lockhart (Christine Baranski), slack jawed with disbelief watching the televised Inauguration of Donald Trump. Poised for retirement abroad, she announces her resignation as a founding partner at Lockhart, Deckler, Gussman, Lee, Lyman, Gilbert-Lurie, Kagan, Tannenbaum & Associates. (The switchboard operators, perhaps in a nod to Auntie Mame, say the full name when answering the phone.)

However, a Bernie Madoff-type ponzi scheme wipes out her savings in a single day, and her toxic association with disgraced financial advisor Henry Rindell (C.S.I.'s Paul Guilfoyle) provides the excuse for her male-dominated firm to decline taking her back. She has little choice but to except an offer by attorney Adrian Boseman (Delroy Lindo) to join him as a name partner at Reddick, Boseman, & Kolstad, an almost exclusively African-American firm.

Equally bad off is new law school graduate Maia (Rose Leslie), the lesbian daughter of Rindell and his wife, Lenore (Bernadette Peters), and likewise fired from Diane's old firm who follows Diane to Reddick, Boseman, & Kolstad. Further, it appears Rindell's bother, Maia's Uncle Jax (Tom McGowan) is having an affair with her mother and the real perpetrator of the grand swindle. Will Diane represent Henry in court?

Meanwhile, the pair try to transition to their new jobs, with Diane adjusting with colleague Lucca Quinn (Cush Jumbo), of The Good Wife, she unhappy with Diane taking over her office and assuming a powerful position within the firm.

The series impresses with its delicate juggle of season-long, multi-episode, and self-contained story arcs, and the complex socio-political weighted scripts, "ripped from the headlines," as it were. The third episode, "The Schtup List," for instance, involves a Doctors Without Borders surgeon accused of offering "aid and comfort" to a supposedly known ISIS terrorist in Syria merely by offering surgical guidance via Skype. That episode concludes on a deeply cynical but depressingly honest if despairing note. That episode also has an intriguing subplot involving the firm scrambling to keep a big company's retainer account, worth millions. However, members of its board voted for Trump, and they want to distance themselves from Reddick, Boseman, & Kolstad, known for its police brutality lawsuits. Boseman and others manage to identify the single (black) lawyer who, within their midst voted for Trump, and want to use him to win back the account. He, however, is reluctant to help, worried that his political views will compel longtime colleagues to ostracize him.

Another episode addresses an increasingly common but virtually unknown practice by corporations who use police interrogation techniques to threaten employees into signing agreements garnishing their wages, forcing them into virtual indentured servitude. Other episodes address the alt-right movement, MeToo, and fake (and "fake") news.

Such plotlines are as timely as all get-out, all the more impressive considering that the episodes first aired (were uploaded?) more than a year ago, when the iron they struck was even hotter. Initially I was concerned that the African-American law firm setting might be a bit pandering, considering that two of the three stars are white, as are various supporting characters, but the setting turns out to be integral to the show, one dominated by strong, interesting women.

CBS/Paramount's DVD of The Good Fight: Season One is a 3-disc set of all 10 episodes averaging 49 minutes apiece, the advantages of non-network 42-minute running times not an issue. (The use of explicit profanity where dramatically called for is also refreshing.) Presented in 16:9 enhanced widescreen with an aspect ratio of about 1.85:1, the series looks great and the Dolby Digital 5.1 mixes are up to current TV standards of excellence. Optional English subtitles are provided on this Region 1 set.

Supplements include deleted and extended scenes, and a gag reel.

Compelling drama, The Good Fight: Season One is Highly Recommended.