Koch Lorber Films // Unrated // April 24, 2018
List Price: $22.99 [Buy now and save at Amazon]
Review by Stuart Galbraith IV | posted May 9, 2018 | E-mail the Author
As an actress, Austrian-born Hedy Lamarr (1914-2000) is largely forgotten. Though strikingly beautiful, her career didn't reach the heights of other European imports like Marlene Dietrich or Greta Garbo. She made only a small handful of movies remembered today, notably the Czech-made Ecstasy (1933), infamous for Lamarr's scandalous nude scene; and in Hollywood Algiers (1938), Boom Town (1940), Samson and Delilah (1949) and a few others.

Her main claim to fame for most of the past 40 years has been as a joke: a running gag in Mel Brooks's Blazing Saddles (1974), in which Harvey Korman's character, "Hedley Lamarr," continually corrects those who mispronounce his first name. Hedy was not amused, suing distributor Warner Bros. for $10 million. (The case was settled out of court.)

However, as chronicled in Alexandra Dean's documentary Bombshell (2017), Lamarr's legacy took a profoundly unexpected twist not long before her death. It turned out Lamarr had been a self-taught inventor whose crowning achievement, a frequency-hopping signal originally intended for radio-controlled torpedoes that she developed with avant-garde composer George Antheil, would come into use by the U.S. military by the 1950s and serve as the foundation for today's Wi-Fi and Bluetooth technologies, among many other uses. 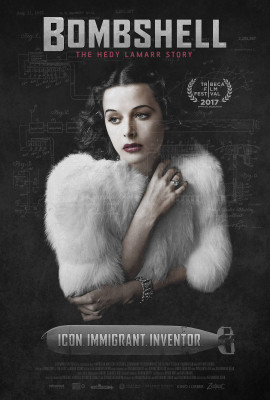 Bombshell (subtitled "The Hedy Lamarr Story" in the ads but not onscreen) might well have become an bitter if partly justified but uninteresting rant about sexism stifling an unusually brilliant woman's full potential. The film is partly that but also lays blame for Lamarr's mostly unhappy, troubled life on a variety of factors: psychological problems and drug addiction, incompatible marriages, Hollywood studio mismanagement of her film career, etc. Lamarr's celebrity undoubtedly worked against her being taken seriously as an innovative, outside-the-box thinker-inventor, and the U.S. Navy's initial rejection of her innovative technology might have similarly been dismissed had, say, Clark Gable or Stan Laurel or Marjorie Main or anyone else's name appeared on the patent.

But there's no question that Lamarr's image as a glamorous beauty quickly became a kind of trap. It got her out of an unhappy first marriage (trophy wife to an arms manufacturer fueling Adolf Hitler's Germany) and, eventually, the Jewish Lamarr out of Nazified Austria and past the gate at MGM Studios. But the vogue for heavily stylized European screen goddesses was already fading by the time Lamarr arrived in the late 1930s. After the success of her first American film, Algiers, she was in all the fan magazines but made few hits and fewer noteworthy movies.

Lamarr seemed to regard her career as a means to an end, using her limited free time inventing things, a talent she credited to her beloved father, who fueled her interests in understanding how everyday things worked. Howard Hughes, a kindred spirit, supported (if bewilderedly) Lamarr's passion, giving her access to his team of developers and their equipment, and later with Antheil their frequency-hopper Lamarr's creation was selected for development by the prestigious Inventors' Council, a newly established government wing designed to speed up technological innovation during the war. In the summer of ‘42, the pair was granted a patent, but the Navy rejected the device as impractical and, possibly influenced by Lamarr's resident alien status, promptly buried it, presumably in some secret warehouse not far from the Ark of the Covenant.

Later, Lamarr's career enjoyed a brief comeback in Cecil B. DeMille's Samson and Delilah, but attempts to revitalize her career in the changing postwar landscape came to nothing. By the 1960s Lamarr's life and career took a series of nosedives: a ruthless parody of her role in White Cargo ("I am Tandaleyo") by Lucille Ball, a 1966 arrest for shoplifting, her virtual abandonment of an adopted son, and an addiction to methamphetamines that seriously damaged her relationships with her other children. She was a pioneer in the growing trend of plastic surgery (Bombshell goes so far as she virtually invented certain procedures) but she greatly overdid it by the 1970s. In footage taken near the end of her life she's virtually unrecognizable and almost frightening to look at.

Bombshell doesn't explicitly say so but it appears that, in her last years, many of her closest friends were gay men, perhaps drawn to her strange combination of intelligence, glamorousness, notoriety, and the camp value (by contemporary standards) of some of her screen roles.

The documentary is most interesting when discussing Lamarr's inventions, especially the frequency-hopper. Director Dean makes excellent use of interviews and graphics to very clearly explain how she developed this technology, how it works, and how it could and would eventually be deployed. If someone as tech un-savvy as this writer could follow everything, you can, too. Further, the movie implies that the government and the military industrial complex not only denied Lamarr (and Antheil) credit for invention but millions if not billions in income due them. Near the end of Bombshell Lamarr receives a teeny bit of long-overdue recognition that, otherwise, would have made her life story almost unbearably tragic.

A Kino Lorber release, Bombshell is presented in 1.78:1 widescreen and mostly looks great. The film makes excellent use of film clips, archival audio and video of Lamarr in her later years, intermingled with excellent graphics and new interviews. The DTS 5.1 Surround is strong for this type of film, and optional English SDH subtitles are provided on this Region "A" disc.

Supplements include an interview with director Alexandra Dean, outtakes with some of the interviewees (including Robert Osborne, in his last filmed appearance), and trailers.