Film Movement // Unrated // June 5, 2018 // Region 0
List Price: $39.95 [Buy now and save at Amazon]
Review by Stuart Galbraith IV | posted June 17, 2018 | E-mail the Author
The title The Great Silence (Il Grande Silenzio, 1968) is synonymous with The Big Sleep, referring as it does to ignominious nothingness following death. Sergio Corbucci's masterpiece, less famous but superior to his earlier Django(1966), The Great Silence is the bleakest, most pitiless Spaghetti Western ever made. Its downbeat, uncompromising (to say the least) ending all but doomed its commercial chances. Reportedly, at a screening in Italy one cinema-goer was so infuriated he fired his own pistol as the lights came up in the theater.

The prolific Spaghetti genre produced several hundred serviceable time-killers, along with some awful Westerns yet only a handful of masterpieces. Beyond the in-a-class-by-themselves Westerns of Sergio Leone, the pack leaders often were politically-driven polemics, with screenplays by left-wing and communist writer-directors. The Great Silence permeates with Corbucci's pessimism. It presents an American West in which men and women, the innocent and the guilty alike, have less value than do their corpses to bounty hunters working as agents of their capitalist masters. They are the 19th century equivalent of today's for-profit prisons housing asylum-seekers and illegal aliens alike, gleefully ripping children from the arms of their parents. Guilty or innocent is of no importance to them, for there's money to be made, so long as one is wiling to shed their humanity while regarding the helpless as something less than human. Whether we chose to admit it or not, that's happening now in America and that's also exactly at the heart of Sergio Corbucci's film.

Until now, The Great Silence never looked particularly good in its various home video versions. I bought a Japanese Blu-ray several years ago and that transfer was pathetic. But Film Movement's new region-free Blu-ray, remastered in 2K from the original camera negative, is astounding, and the disc is loaded with extra features. 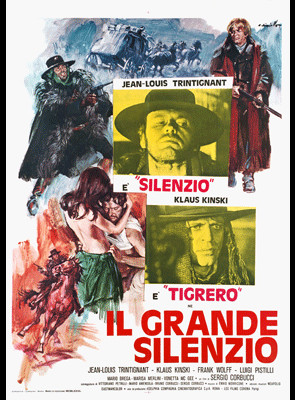 Set in snow-swept Utah in 1898, blizzard conditions have forced many townsfolk in remote Snow Hill to steal to survive, if driven far into the mountains above where they face death by exposure and starvation. Banker and Justice of the Peace Henry Pollicut (Luigi Pistilli) has hired a ruthless gang of bounty hunters, led by the sadistic Loco* (Klaus Kinski) to kill these "outlaws." The Governor assigns the town a new sheriff, Gideon Burnett (Frank Wolff), to maintain order until amnesty can be grated for the hungry, causing a rift between the righteous new lawman and the corrupt banker.

Meanwhile, after her husband is murdered by Loco, African-American widow Pauline (Vonetta McGee, in her film debut) hires a mute gunman, "Silence" (Jean-Louis Trintignant) to kill Loco. In flashbacks, it's revealed that Silence had witnessed the murder of his parents as a boy, and that Pollicut had his throat slit so that he would not be able to identify his parents' killers.

Unexpectedly, the sheriff arrests Loco, intending to transport him to jail in another town, while also mercifully offering food to the starving outlaws. Pollicut and Loco, however, have other plans.

The Great Silence might have flopped, but its influence has been felt over the last half-century on a variety of contemporary filmmakers, no one more than Quentin Tarantino, whose Hateful Eight (2015), mirrors The Great Silence's tone, brutality, locales, pessimism, and several whole sequences so closely that to call it a semi-remake would not be inapt. The Great Silence, in turn, was itself influenced by earlier "snow Westerns" like Andre de Toth's Day of the Outlaw (1959) and William A. Wellman's Track of the Cat (1954). Reportedly, the costume worn by Klaus Kinski was based on that worn by Boris Karloff as Gorca the vampire in Mario Bava's Black Sabbath (1964).

Regardless, dominating the picture is Corbucci's harsh criticism of authoritarian capitalism, in which the Gestapo-ICE-militarized police-like bounty hunters kill with impunity, partly out of sadism and religious and racial intolerance (some versions of the film imply the outlaws are persecuted Mormons), but also because, in this world, brutality pays. Though villains like Pollicut and Loco match in some respects the "brain heavy" and "action heavy" of Westerns dating back to the silent era, in The Great Silence Corbucci subverts them beyond their usual archetypes. Loco may be the antithesis of a Western lawman but he does technically follow the law for most of the film, and always in the service of the capitalists like Pollicut, whose interests he protects with tacit approval from the government. The film's bleak, blizzard-ridden landscape is drained of the grand, mythological and idealized American West of most Hollywood Westerns, underscoring the dire and insurmountable conditions which drive the plot. Frank Wolff's sympathetic sheriff comes in these surroundings comes off as hopelessly naive.

With the character of Silence more the conventional Spaghetti gunman-with-a-gimmick, seeking vengeance for a murder of a family member a la Charles Bronson's far more memorable character in Once Upon a Time in the West (1967), Kinski totally dominates. As DVD Savant noted in an earlier review of the film, he plays Loco as if he were the film's hero, and his performance transcends the various versions of the picture, no matter than his voice isn't heard on either the Italian or English tracks. Also noteworthy is Ennio Morricone's magnificent score, less tuneful perhaps than his music for Sergio Leone, but which amplifies the picture's grim themes hauntingly.

Film Movement's region-free Blu-ray is a thing of beauty, the 1.85:1 widescreen image gorgeously capturing the bleakness of the stark, snow-covered locations (filmed mainly in the Dolomites). The English mono audio (not noted on the packaging) is notably less impressive than the Italian track, which has better voice actors in the various roles. (In the English version, Kinski comes off annoyingly rootin'-tootin'.) The English subtitles are not "dubtitles" but reflect the Italian audio, though they do tend to race by a bit too quickly at times.

Certainly one of the Top Ten Euro-Westerns, The Great Silence finally gets a worthy home video release, and this more than qualifies as a DVD Talk Collector Series title.


* The Italian audio clearly address the character as Tigero, but the subtitles identify him as Loco.