Beyond The Hills: Criterion Collection 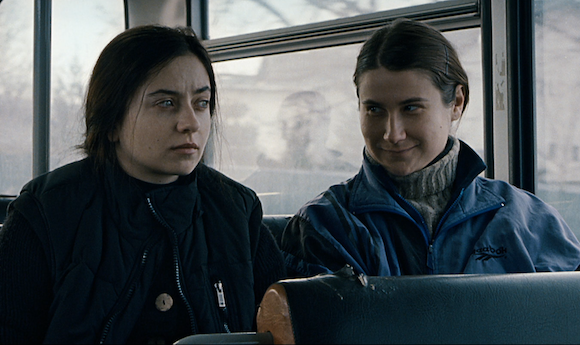 It's been roughly a decade since the Romanian New Wave made a worldwide splash, with startlingly bleak human dramas like The Death of Mr. Lazarescu and 4 Months, 3 Weeks, and 2 Days. Romania's filmmakers have continued working, but their films have gotten less attention here in the States. This makes the addition of two more recent films from 4 Months director Cristian Mungiu to the Criterion Collection entirely welcome.

The earlier of the two films, Beyond the Hills (2012), is a story of religion gone awry. It's inspired by a true incident but fictionalized by Mungiu to more closely examine the boundaries of faith, dogma, and superstition. Cosmina Stratan and Cristina Flutur shared the Best Actress award at the Cannes Film Festival for their lead performances here (Mungiu's screenplay also won a prize). Stratan plays Voichita, a young nun living in a secluded Eastern Orthodox monastery over the hill from a small town. Flutur plays Alina, a friend of Voichita's from their days in an orphanage. Alina comes to visit Voichita, in hopes of getting her to move to Germany with her. Alina's behavior makes it clear that she and Voichita were more than just platonic friends, but Voichita keeps insisting that she doesn't love Alina "like that" anymore.

Alina's passion is not so easily derailed, but anyone who looks at Beyond the Hills' stark, wintry images and expects an offbeat romance to develop should get their eyes checked. Instead, tensions start to build between Alina and the other inhabitants of the monastery. Quietly, at first: the priest in charge, known only as Father, or "Papa" (Valeriu Andriuta), resents the presence of a non-believer, but allows Alina to stay if she confesses her sins. The Mother Superior, or "Mama" (Dana Tapalaga), has more sympathy for Voichita's friendship for Alina, but playing the good cop to Father's grim bad cop is clearly part of her role in this community.

The other nuns flat out distrust Alina. Her reticence to open her heart to God, and her erratic outbursts lead them to suspect that she is under the influence of the devil. The incident which inspired the film involved a young woman who was suffering from mental illness, but Mungiu tries to make Alina's situation slightly more ambiguous. She might be clinically disturbed, or she might just be emotionally traumatized, by having these religious people rip away the love of her life and place the barrier of dogma between them.

Rather than zipping right along to a pulpy "power of Christ compels you" sequence, Mungiu gives the religious characters more than enough space to exhaust what they deem to be rational options. The nuns tries to get Alina hospitalized, but the hospital sends her back. They try to re-connect her with her foster family, but Alina refuses, since it means being kept away from Voichita. Voichita clearly feels the same intensity of connection with Alina, but she has put God first now.

The final section of the film is indeed an exorcism. A violent outburst leads Father and the nuns to tie Alina down and pray over her. Seeing her friend in this situation throws the question of Voichita's faith, and her love for Alina, into sharp relief. It's a harrowing sequence for all involved, especially the audience, who can watch as the characters' good intentions irreversibly pave the road to hell.

While the subject matter is potentially depressing, Mungiu's filmmaking is vibrant. Most scenes are captured in long traveling takes that could be taken for documentary realism, if not for the haunting purity of cinematographer Oleg Mutu's lighting. The performances are full-blooded and realistic; the leads can convey the layers of their characters' relationship just in the way they sit together. The religious characters are never portrayed as villainous or stupid. One could allow that the film finds them misguided, but it also seems to comprehend and empathize with how they came to their views. In its unusual way, Beyond the Hills is a demand for greater understanding and compassion, especially toward those we feel most compelled to shut out and shout down. Just what we need.

The Blu-ray
Beyond the Hills is packaged with a fold-out booklet, featuring an essay by Doru Pop.

The Video:
An excellent digital rendering of the shot-on-film image. This AVC-encoded 1080p 2.40:1 presentation shows no major encoding issues. The color palette is a desaturated blue-grey, but it doesn't look too harsh or oversimplified. There's nice texture and depth within each frame. Some wide shots look a little soft, but this is the probably the result of the original handheld cinematography.

The Audio:
There's a quiet meticulousness to the film's Romanian DTS-HD 5.1 surround audio (with optional English subtitles). Mungiu and his sound designesr oh so subtly evoke seclusion, isolation, and, on the other hand, mounting anxiety with the use of ambience. The soundtrack never goes outside the bounds of what one would deem "naturalistic" (there is no musical score, for example), but the audio still creates an immediate psychological and emotional effect.

(HD upscale, 36:24) - Director Cristian Mungiu narrates some lo-res B-roll, shot on the set of the film. Despite the picture quality, Mungiu is thorough in explaining each aspect of the director's process from location scouting and set construction to shooting, making this a pretty great look into the world of a film set.


Final Thoughts:
Beyond the Hills is a startling film about how our beliefs can blind us to reality and block our ability to feel human compassion. It's not a film that deals in absolutes, so be prepared to chew this one over for days afterward. Criterion's presentation is first-rate as usual. Highly Recommended.