Birth of a Nation (Twilight Time/Photoplay Centennial Restoration), The 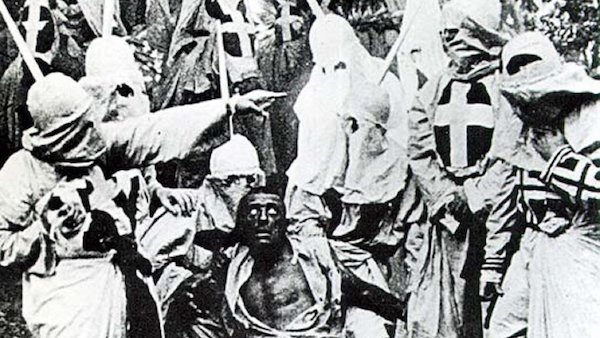 NOTE: The images included here are taken from various online sources and do not reflect the quality of the Blu-ray under review

There is one anecdote which comes to mind whenever I think of D.W. Griffith's 1915 magnum opus, The Birth of a Nation. I don't remember the documentary from which I heard it, but it was a doc I saw in my Intro to Film Studies class in college, the week after the professor had instructed the projectionist to roll Birth of a Nation without being present herself. She wanted us to soak in the film for seven days before offering discussion, context, or even an outlet for reaction.

Anyhow, the anecdote. Griffith had an African-American servant who was so fond of him that she named her first-born child after him. He gave her free tickets to check out Birth of a Nation, assuming she would be pleased. After seeing the film, she resigned and changed the name of her boy.

Anything I have to say about the potential for powerful hurt that resides in what is easily the most influential blockbuster film in American history just pales next to that story.

Of course, this is a touchy time to be engaging with anything racist, let alone proudly white supremacist. 2015, much like 1915, seemed like a moment in American culture where white supremacist groups had been sidelined from mainstream political influence. But, all it takes is one election or one wildly popular historical epic to reinvigorate something that deserved (deserves) to die a natural death. The Ku Klux Klan was on the decline until Griffith's paean -- originally titled The Clansman before the more rousing Birth of a Nation was selected -- brought the organization roaring back in force.

There's plenty of evidence that Griffith himself wasn't quite as racist as his film. Twilight Time's Blu-ray package even includes an earlier short of Griffith's, The Rose of Kentucky, in which the KKK are the villains. He was a showman, a storyteller, a master manipulator who knew how to give audiences what they wanted. Of course, this makes Birth of a Nation more insidious in a way, just because it is so well-crafted, so audacious, and so entertaining -- in service of a virulently racist message that its perpetrator isn't even necessarily married to. 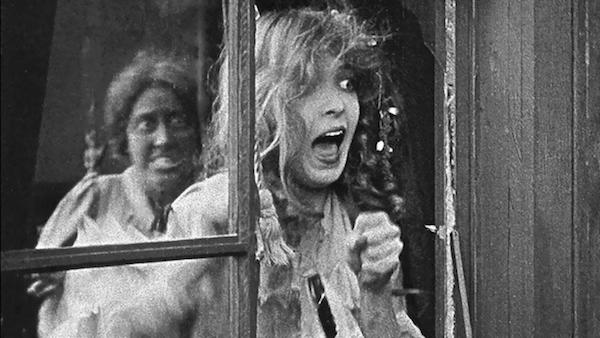 My reaction to The Birth of a Nation now is similar to the one I had back in college. The first half is a humdinger of a war melodrama, despite the distracting blackface performances by certain supporting players and frustratingly facile assertions that the Civil War was fought entirely over states' rights. Two families from opposite sides of the Mason-Dixon line have their friendship and affection tested by the declaration of war between the states. Up north is the Stoneman family, headed by Congress leader Austin (Ralph Lewis, in a parody of real-life progressive Thaddeus Stevens), and down south are the Camerons, headed by the gentle-spirited Doctor (Spottiswoode Aitken, which is not a name I just made up). Perhaps inevitably, one of the Cameron boys falls for Stoneman's daughter and vice versa. However, war asks a terrible price, and both families lose some of their young men in battle.

Henry Walthall, as "Little Colonel" Ben Cameron, gives a truly intriguing performance. His combination of bravery and empathy during the first half's stirring battle climax cements him as a character that viewers can care about. Walthall is so good in the role that, in the film's second half, when he becomes embittered by freedmen and carpetbaggers during Reconstruction, his anguish becomes pathological. In an attempt to redeem the moral awfulness of the later scenes, it's tempting to view the Little Colonel as an anti-hero driven to mad delusions.

Unfortunately, only a smart-ass in 2018 would read the film in this way. The film clearly means to portray Cameron as a capital-H Hero, who fights to remind black folks that their place is subservient to whites and to show the hypocrisy of white rabble-rousers who would say otherwise. When Ben and his clansmen lynch the libidinous Gus (Walter Long in blackface) after he inspires Ben's terrified sister (Mae Marsh) to jump off a cliff rather than be his love object, we're clearly supposed to cheer for the catharsis of "justice." Now, I think Mae Marsh is adorable, but she's at least partly culpable for deciding run up a damn cliff in the first place. (As I said, only a smart-ass.)

As the film barrels toward its pulse-pounding conclusion of cross-cut action that set a template still followed in pretty much every tentpole movie up to and including whatever came out last week, I found my reaction much more schizophrenic than back in college. I suspect it's because I've watched more Griffith films since then and liked them. Intolerance is astonishing (in the right way). Griffith truly is a visionary and a master filmmaker. But most of this film's second half is so mind-searingly cartoony -- anyone who has seen those barefoot, drunken, blackface statesmen will never forget them -- that one often has to dissociate just to apprehend the groundbreaking film craft unspooling onscreen.

In the final setpiece, the KKK rides to rescue Lillian Gish from miscegenation and also a small band of "good people" trapped in a cabin by rabid black soldiers. Scored to Wagner's "Ride of the Valkyries," it's action filmmaking at its finest. It's also bullshit. Unfortunately, it's not the kind of bullshit that might convince you that Chris Hemsworth has a chance in hell against the Incredible Hulk. It's the kind that leads people to go along with genocides.

I'm not suggesting that we destroy this film or ban it. That doesn't solve anything, just like assuming this country cured racism by electing Barack Obama. We need to keep The Birth of a Nation around. We need to wrestle with it, so we can figure out how to better fight against it. We also need to follow the example of my Intro to Film prof, who immediately followed up her screening of The Birth of a Nation with a screening of the work of African-American cinema pioneer Oscar Micheaux. We should preserve and study those contemporaneous works that sprung up in reaction to Birth of a Nation. A smart-ass might end this article by saying, if all films matter, then black films matter. Yep, that's just what a smart-ass might do. 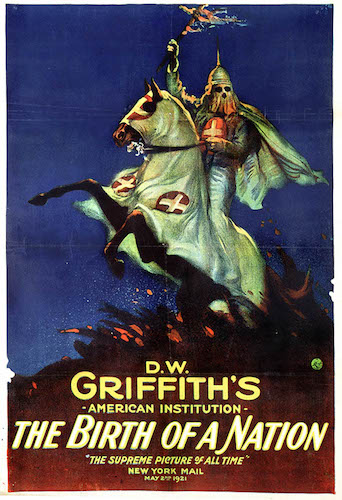 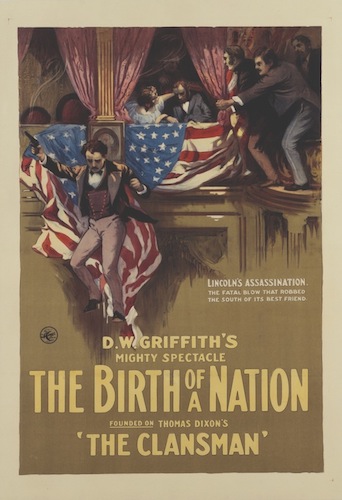 The Blu-ray
Twilight Time's edition of The Birth of a Nation comes in a limited edition of 3000 copies. It is a 2-disc set, with the feature film on disc 1 and the majority of the bonus material on disc 2. The discs are packaged with a booklet, including liner notes by TT's Julie Kirgo.

The Video:
This restoration from Photoplay Productions looks outstanding. (I did not see the 2011 Kino Blu-ray of this film, so I cannot compare the two.) The AVC-encoded 1080p 1.33:1 image naturally has some irreparable scratches and damage, as well as a few patches where lower-quality film materials were sourced, but these flaws are minor in the overall scheme of this restoration. Clarity and contrast are excellent, and original color tinting has been maintained.

The Audio:
John Lanchbery adapted and conducted a full orchestra version of Joseph Carl Breil's original score for the film in 1993. That recording is presented here both in a new DTS-HD MA 5.1 surround mix and the original DTS-HD MA 2.0 stereo. Both sound excellent.

(HD, 7:50 total) - A few odd pieces in which D.W. Griffith and Walter Huston discuss the film, in a staged interview. Even fifteen years later, Griffith doubles-down on the message of the film by saying the KKK was "necessary then." Hoo boy.

Final Thoughts:
Roger Ebert stated, in his excellent write-up, that The Birth of a Nation is "a great film that argues for evil." As such, it's hard to give it a straightforward recommendation or dismissal. Photoplay's restoration and Twilight Time's packaging of the film are both excellent, so this Blu-ray deserves praise. If you're going to add this to your shopping cart, consider adding the recent Pioneers of African-American Cinema box set too. This release is Highly Recommended. 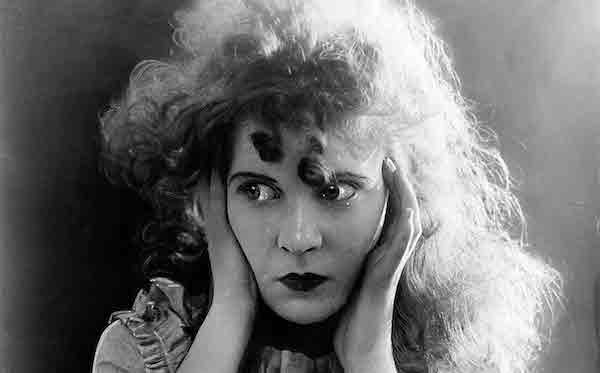