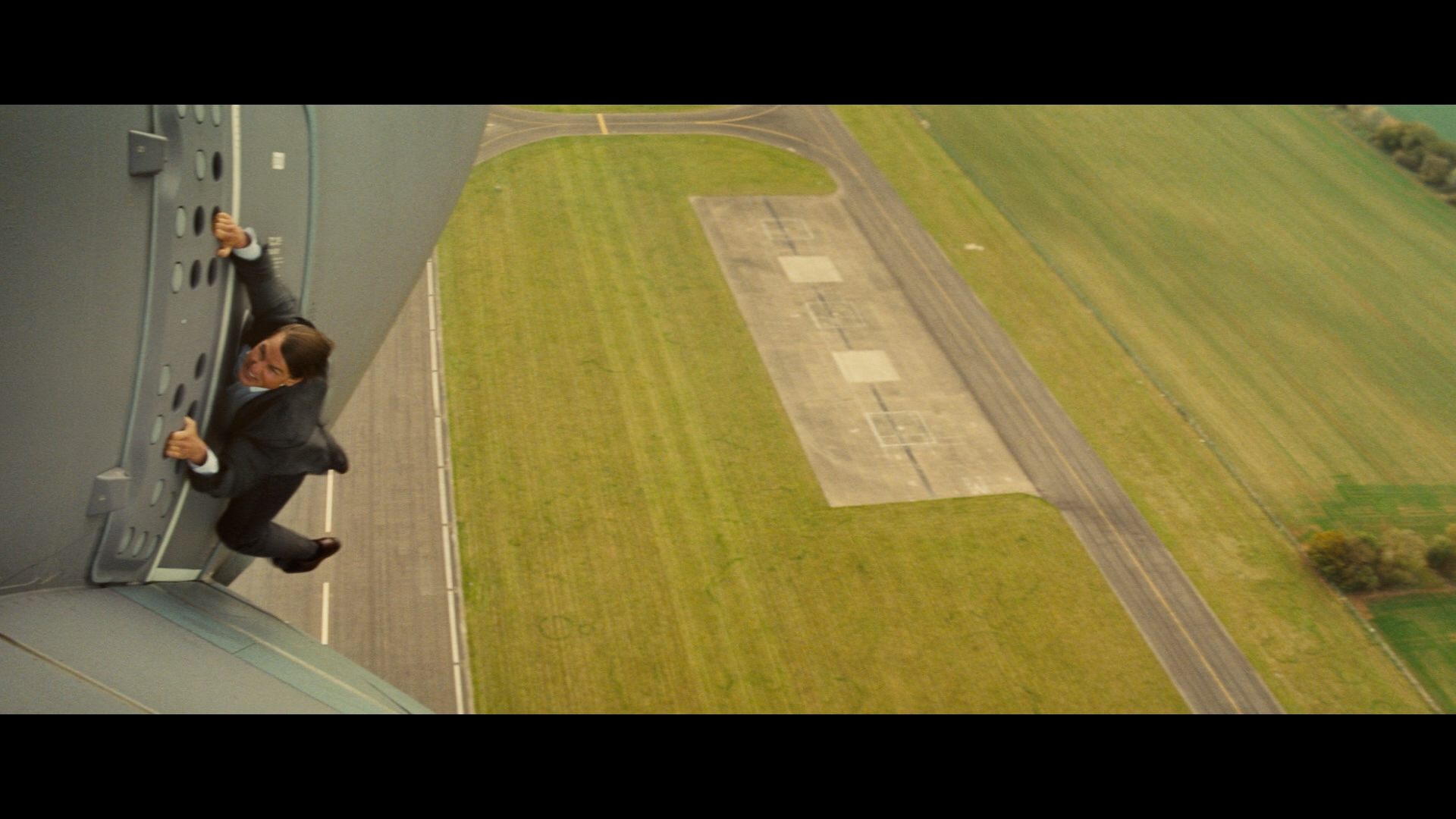 Tom Cruise and Christopher McQuarrie have become a new power team in Hollywood. After writing the Cruise flick Valkyrie, then both writing the screenplay for and directing Jack Reacher and serving as writer once more on the underappreciated Edge of Tomorrow, Cruise (who has served as producer on all the Mission: Impossible movies) decided it was time to bring "McQ" (Tom's nickname for the director, not to be confused with McG) onboard his big franchise, and the relationship worked so well, McQ directed not only wrote and directed this sequel, but this summer's follow-up, Mission: Impossible - Fallout.

The driving force of the Mission movies isn't just about coming up with a fun, new thrill ride for Ethan Hunt (Cruise) and his IMF team, but seeing what death-defying stunt can be done by its lead actor (Cruise is noted for doing almost all of his on-screen stunts, particularly when it comes to this franchise). The last movie, Ghost Protocol, saw Cruise hanging outside the Burj Khalifa in Dubai - which is the tallest building in the world. This time around, we don't have to wait long for the movie's "big" stunt, which has Cruise/Hunt hanging off the side of an Airbus A400M as it takes off. Other big stunts in the film have Cruise doing a high-wire act inside an opera house, going underwater for an extended sequence, and zooming at top speeds helmetless on a motorcycle (motorcycle sequences are almost becoming an expectation in these sequels). All these sequences are a blast to watch - primarily because CGI use is kept to an absolute minimum. But all this action would be meaningless without a good story, and Rogue Nation delivers on that end as well.

After the events of Ghost Protocol, it looks like Congress is considering shutting down the IMF completely, and CIA chief Alan Huntley (Alec Baldwin) wants to make sure that happens - using the destruction from the last Mission: Impossible movie to make his case. IMF team member William Brant (Jeremy Renner) is on hand to defend his organization, but he and Huntley are butting heads from the start. Meanwhile, Hunt has come to learn that the shadowy organization called "The Syndicate" actually exists and is led by Solomon Lane (Sean Harris), a former MI6 (Britain's version of the CIA, and also James Bond's employer in another movie universe) agent who went rogue (hence, the title of this film). Lane is one of those classic movie bad guys who may physically be no match for our hero Hunt, but who has enough henchmen and brain power behind him that he proves to be one of our hero's best adversaries in the history of these films.

In addition to having pal Benji (Simon Pegg) back for another adventure, this entry makes far more use of Luther Stickell (Ving Rhames, who only cameoed in the previous film) and introduces a new friend (or is it possible foe?) for Hunt: British MI6 agent Ilsa Faust (Rebecca Ferguson), who seems to be working for The Syndicate when she first appears in the movie. Writer/Director McQuarrie's film has just as much action as the prior movies, although fewer set pieces - he seems to enjoy having longer, more elaborate sequences rather than jumping from one bit to the next. That gives Rogue Nation a slightly (but not much) more leisurely pace than Ghost Protocol and after having to save a nuclear bomb from going off in the fourth entry, Lane's plan - which will help make his organization even more unstoppable - doesn't quite have the intensity of the last story.

Still, with the above in mind, Rogue Nation is another solid entry in this continuing series of titles. While I didn't personally enjoy it as much as the third and fourth entries, I think it's better than the first two and certainly worthy of carrying the Mission: Impossible name.

Mission: Impossible - Rogue Nation explodes onto 4K in this combo pack, which - in addition to the 4K disc - includes two Blu-rays (one with the feature film and one with additional bonus materials) and an insert containing a code for a digital copy of the movie. The three discs are housed inside a black Elite keepcase and a slipcover with artwork matching that of the case slides overtop. There are no front-loaded trailers on any of the discs in this set. The main menu of the 4K disc is just a still of the box cover image with menu selections across the bottom of the screen. The Blu-ray menus are more dynamic, featuring a montage of footage from the movies.

Mission: Impossible - Rogue Nation was shot primarily on 35mm film using the Arriflex 435, although the Arri Alexa 65 (65mm) was used for a number of scenes, as were digital cameras (primarily the Arri Alexa XT) for some aerial footage. It is presented on both the 4K and Blu-ray discs in the 2.40:1 aspect ratio. For the most part though, this is a 35mm film that was transferred to 4K from a 2K digital intermediate master - meaning it's not "true" 4K we're viewing, but rather an upgrade from a 2K source. That said, the image provided is still pretty good.

As with most 4K releases, the most noticeable difference here (from a Blu-ray that already has a quality transfer) is the boost in contrast/colors and more inky black levels. While Rogue Nation may not look quite as good as I thought Ghost Protocol did in 4K, there's enough of a jump in detail and definition over the Blu-ray to warrant picking this release up - particularly for those who never owned the Blu-ray release. Those will Dolby Vision-capable players/sets will also want to note that the 4K disc is Dolby Vision encoded, in addition to playing back at HDR10 for those with a 4K setup that not yet equipped.

Both the 4K disc and the Blu-ray movie disc present the film with an English Atmos track (which downgrades to a 7.1 Dolby TrueHD track for those - including this reviewer - who have not yet made the jump to Atmos). The track is quite impressive and immersive, with low-end explosions that will bring one's subwoofer to life, gunshots zinging by and cars and motorcycles zooming past that take advantage of the surround speakers, and clear, crisply heard dialogue that is properly mixed, so neither the music nor all the ambient noises ever drown out the spoken word. As Atmos mixes go, this one isn't quite reference-quality, but it's certainly up there and fans of this movie and this series won't be disappointed with what they get here. 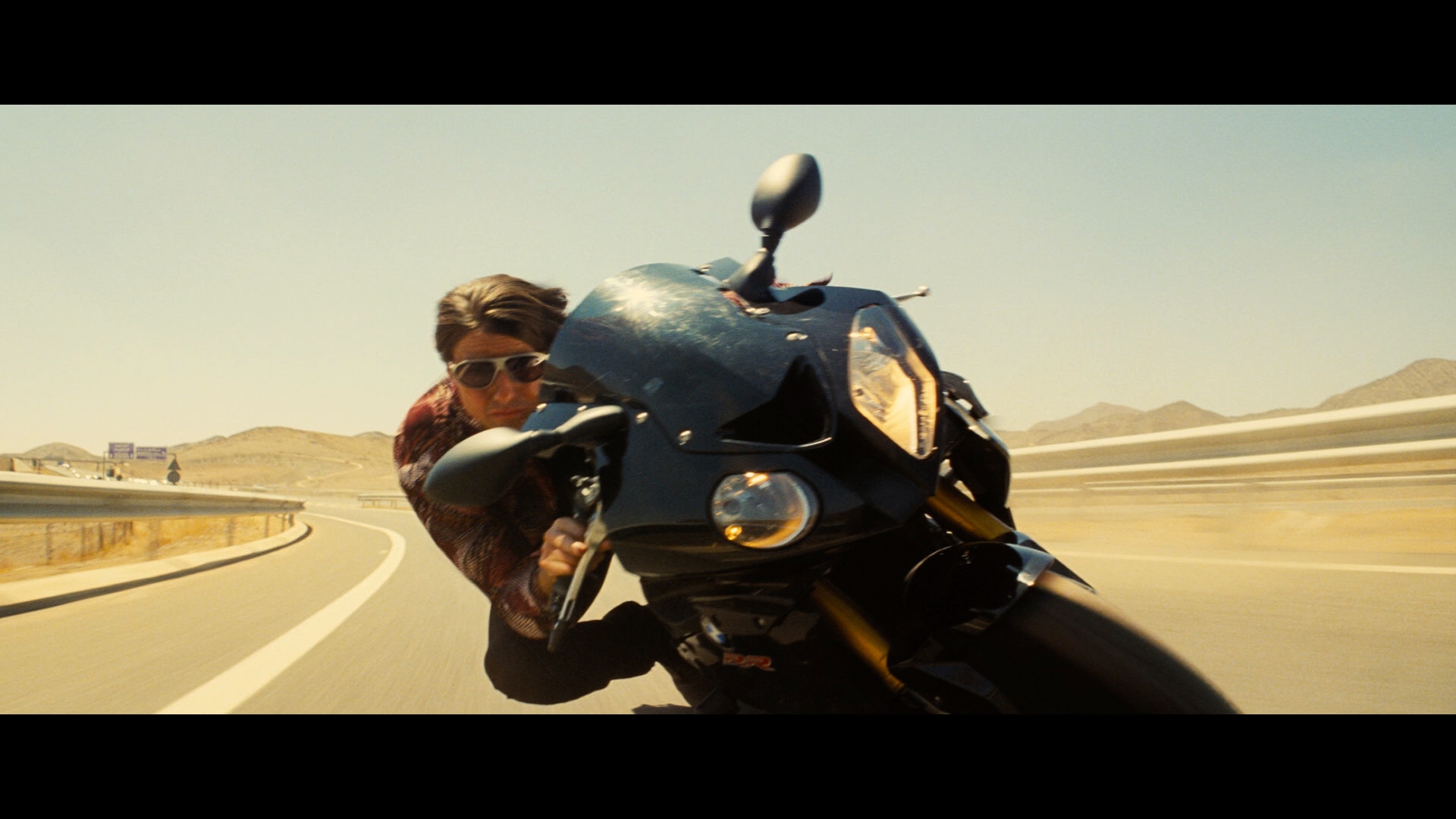 Note: Other than the commentary track, which is present on both the 4K and Blu-ray discs, the bonus features listed below are on the Blu-ray discs only.

Note: While the featurettes listed below are exclusive to the second disc, it should be noted that all of the extras listed above (with the exception of the commentary track, obviously) also appear on this bonus disc. 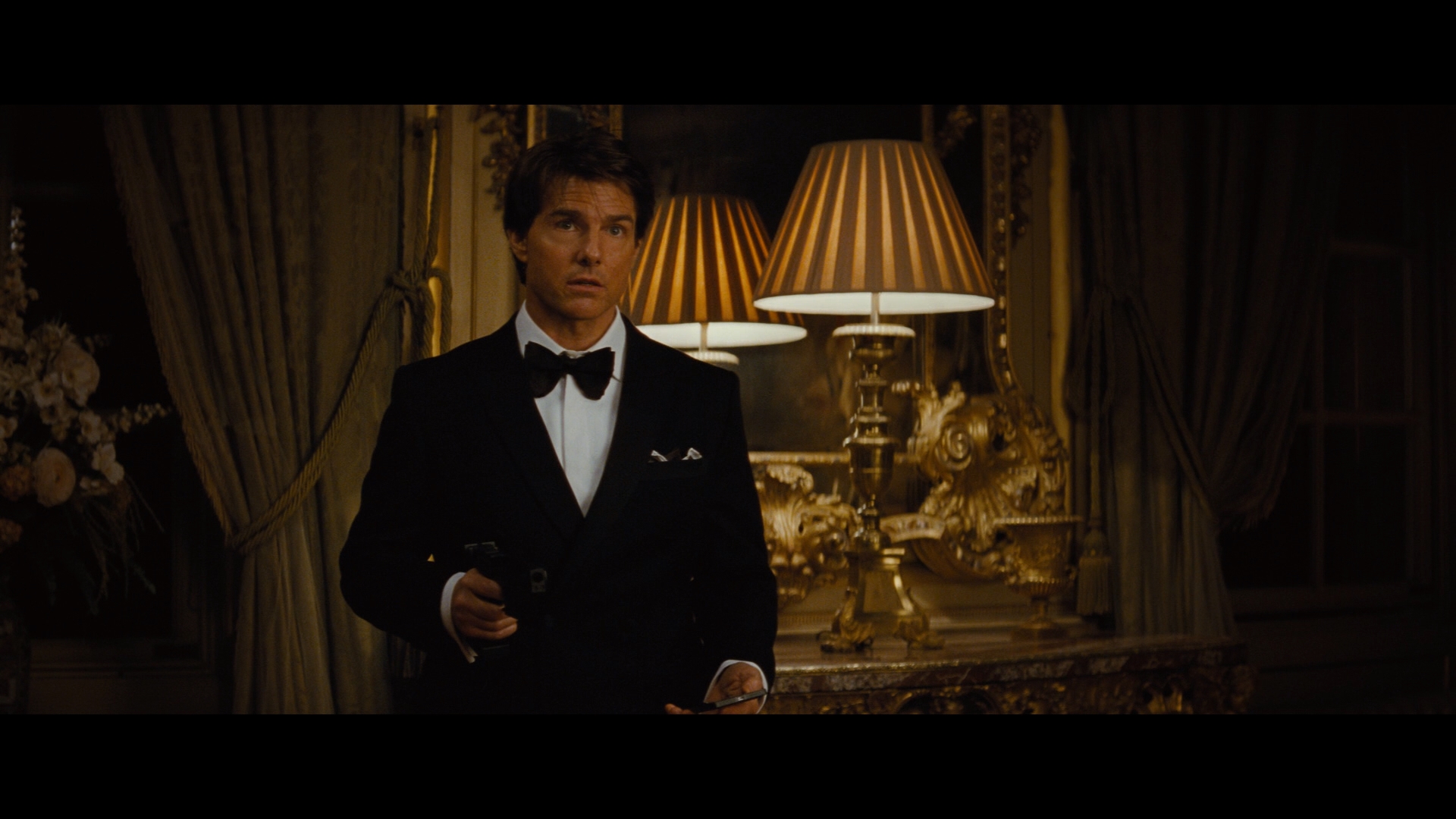 Mission: Impossible - Rogue Nation isn't quite the thrill ride some of the other entries in this series have been, but it's still a solid action film that builds off of the stories that have come before and even helps set up the current adventure, Fallout. Although there's nothing new on 4K in terms of bonus features, the upgrade adds contrast and better black levels enough that upgrading should be considered, even if you already own the Blu-ray version. Recommended.