The subject of famous serial killer Jeffrey Dahmer, arrested in 1991 and killed by a fellow inmate in 1994, has been taken on a few times such as the uneven Dahmer and watchable yet not very memorable Raising Jeffrey Dahmer, but My Friend Dahmer easily outdoes those as not only delivers far better performances from the cast but includes insight from someone who went to high school with him. Credited as Derf Backderf and sometimes referred to as John (likely not his real name, as I learned from Little Man Tate that "Derf" is "Fred" spelled backwards), he was one of Dahmer's few friends during that time. He was also an aspiring cartoonist who has since made a graphic novel about Dahmer's high school days, on which this movie is based. This provides a very unique perspective as the author shares his often humorous perceptions on Dahmer before he began committing crimes (the movie ends after the two see each other for the last time, and right before Dahmer commits his first murder.) 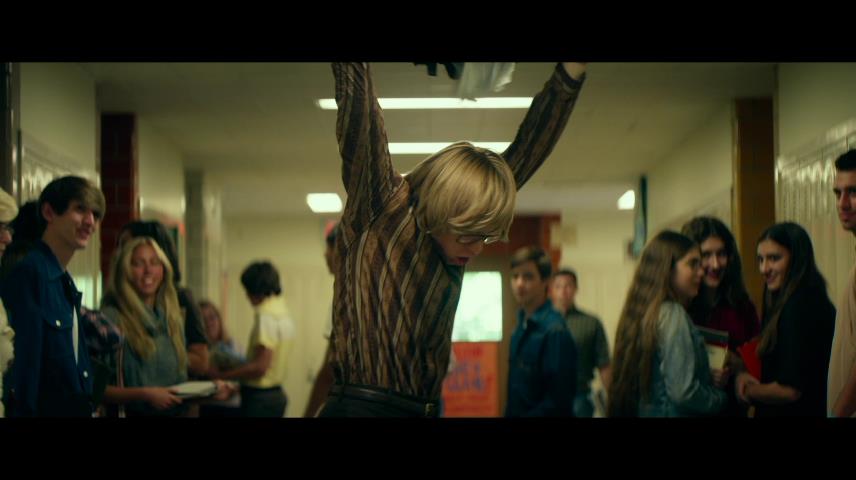 Ross Lynch, who starred in Disney's guilty pleasure musical "Teen Beach Movie" successfully sheds that clean-cut typecasting to play Jeffrey Dahmer himself. We meet him right before starting his senior year of high school in 1977, where he's quiet and keeps to himself. The first real sign that something isn't right is that he's fascinated with dead animals found on the road, taking them home and studying them in a backyard shed (he eagerly shows this hobby to some neighborhood kids who are quickly repulsed and avoid him after that.) It doesn't help matters that his mother (played by an almost unrecognizable Anne Heche) is pretty much insane herself, having been in and out of mental institutions, on drugs and blowing the family's money on frivolous things, while his dad (Dallas Roberts) passively tolerates it for a while before eventually leaving. Jeff eventually decides to attract some attention at school by faking epileptic seizures in the hallways, which makes most of the kids laugh. The author Backderf (Alex Wolff, the other "Naked Brother") is particularly amused by his antics and makes him the subject of his many drawings. He finally comes up to him in the lunchroom, seeing that he's on his own, and invites him to join his group of friends. This might be the break he needs to fit in.

He enjoys the attention and companionship for a while, but still can't completely connect however and continues to obsess about the insides of people and animals are like, as well as get drunk on a regular basis. With his mother basically being a nut case, he doesn't even want to have his friends over to hang out. A number of funny and sad episodes play out, the most interesting of which is when he goes on a class trip to Washington DC and cons his way into meeting then-Vice President Walter Mondale with some classmates. He also manages to secure a prom date, but then finds he isn't into it and leaves early. Of course a viewer's reaction to all of this depends on their willingness to separate it from what happened later- the writer thinks of this as a "cautionary tale" as he feels the parents and teachers could have done something to help Dahmer or at least seen his behavior as a warning of what he would do later. The writer has said that he felt a bit sorry for Jeff at the time of the events depicted here, but his sympathy ended for the time after that when it was learned he had spent about 13 years luring people home and then murdering them in gruesome ways.

Another unique aspect of My Friend Dahmer comes from its being shot in the actual house where Dahmer and his disintegrating family lived during the time depicted. It had changed hands a few times and is currently owned by musician Chris Butler, most famous probably for being part of the new wave group The Waitresses. He'd already been attracted to the house before knowing its significance, and allowed the crew to shoot there. The décor had been a bit modernized but was re-dressed for the movie appearing more authentic to the period. 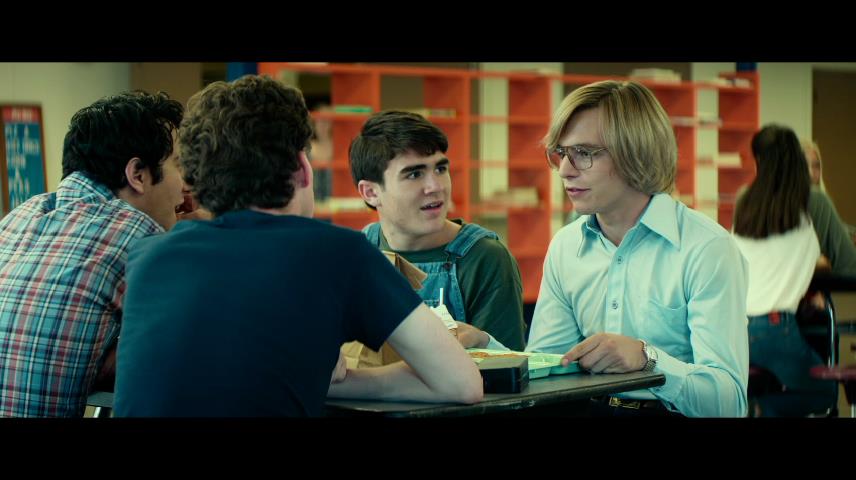 Although shot digitally, anamorphic lenses were used to make this 2.35 presentation appear very similar to a production shot that way on film. It almost succeeds in passing for film except for the steadiness and complete lack of dust. Colors appear to be a bit muted intentionally to mimic the look common of movies shot during the late 1970s. This single-layer Blu-Ray disc unfortunately suffers from a bit of compression artifacts in dark scenes as well as some banding.

The 5.1 audio mix is encoded in standard Dolby Digital but is quite adequate here. Typical of this type of movie, dialogue is rather low and should be played at a high volume setting. An atmospheric music score is used in some scenes while others are underscored only by ambient sounds, and a few songs of the period are included as well- "Derf's" musical taste is certainly interesting based on what we hear in his car. An alternate 2-channel track is also included which also works quite well, and the disc includes hearing-impaired subtitles which are done a bit sloppily with a few misspellings and such. 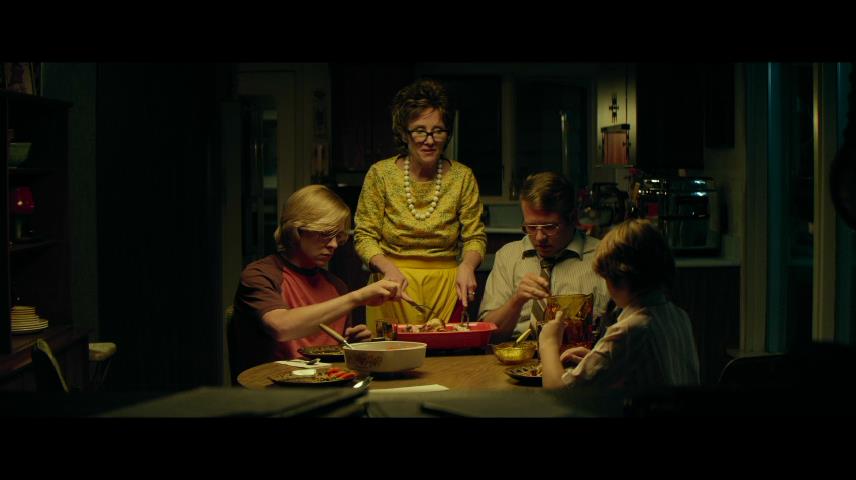 This was definitely a movie that left me wanting more after the end, but the only substantial extra is an interview with actor Ross Lynch that runs about 3 minutes. He talks about the challenges of getting into character and how he had to take a long shower every day after shooting to "wash away" Jeffrey Dahmer and return to his normal self. Also included are a few still photos of production, and the movie's theatrical trailer. There's a bit more information about this movie available online which almost makes up for the lacking extras here. 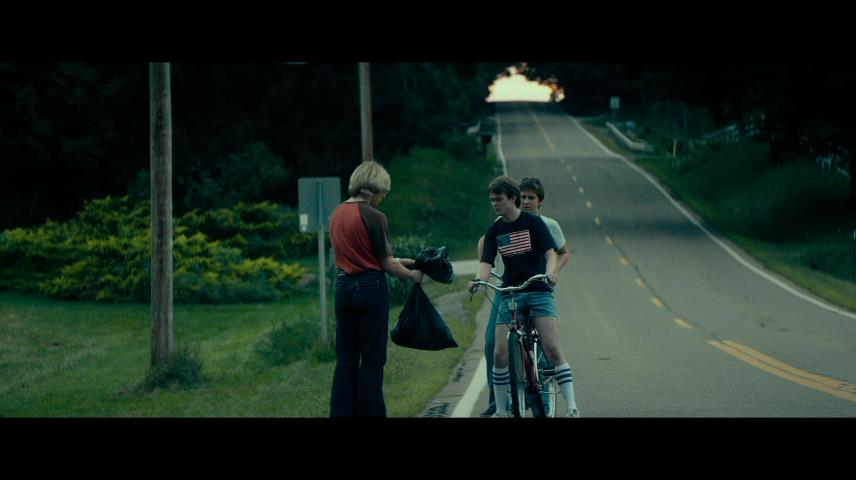 My Friend Dahmer is essential viewing for those fascinated with the early lives of serial killers, showing via first-hand information what Jeffrey Dahmer was like in high school and how his life might have turned out for the better with a different family life and authority figures. Some have criticized this movie, without having actually seen it, for "glorifying" the life of someone who went on to do awful things but I didn't see it that way at all. By the end it leaves you both unsettled but also curious for more details of what happened during it and afterwards. I'm planning on picking up the graphic novel as soon as I can to see more of the author's perspective.