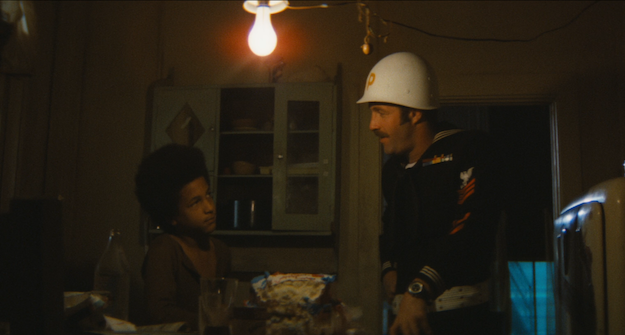 John Baggs, Jr., is a sailor who claims he doesn't like to curse. Mostly, this seems to mean he says "Gosh darn," instead of the blasphemous original, as other expletives pass his lips more than a few select times throughout Cinderella Liberty. This claim might also be an inside joke by the film's screenwriter Darryl Ponicsan (adapting his own novel), as another Ponicsan sailor story, the infamously F-bomb-littered The Last Detail, hit American screens roughly a week before Cinderella Liberty.

The Last Detail has found its place in the canon of '70s American classics, while Cinderella Liberty is a relative obscurity. This is not a reflection of the quality of Cinderella Liberty, however, even though it is a little more sentimental and formulaic than its better known cousin. The film's sensibility is so '70s, so essentially honest, that it never approaches what we might call canned Hollywood corn.

The actors have a lot to do with it. James Caan brings his signature blend of toughness, humor, and carefully guarded decency to his portrayal of Baggs, a Navy boatswain stranded in Seattle after his medical stay is unintentionally extended. The title refers to a shore leave pass that expires at midnight, but Baggs is looking at weeks and weeks of time off a ship since the Navy has lost all record of him. This isn't a total lost cause because, after wandering into a sailor-friendly bar, he meets Maggie, a pool-hustling lady of the night played with verve and moxie by Marsha Mason. Mason got her first Oscar nomination for this role (three more would come in the decade that followed), and it's no surprise.

Kirk Calloway plays Maggie's 10-year-old mixed race son Doug, and it's a thankfully much more nuanced performance than many "wise beyond his years" kid parts. Doug drinks beer and brandishes a switchblade; he cusses worse than Baggs. Unsurprisingly, all this behavior is a barrier Doug puts up to protect his sweet and squishy emotions, but Baggs -- and the film -- mostly doesn't condescend to Doug and tries to look out for him.

While the sentimental formula of this flick lies in its overarching story of misfits who must decide to give up some of their misfit ways to become a family, the story details are much sloppier and more interesting than that pat description. The quirks of these down-and-out characters -- their dreams, their self-sabotaging habits -- smell lived-in and real. There's as much heartache as there is gold in Maggie's hooker heart. Baggs has long treated the Navy as his surrogate family, but with their neglectful treatment as of late, he has reason to look for another home.

Eli Wallach plays Forshay, a former superior of Baggs's whom he had come to hate. Forshay is given the heave-ho by the Navy, and he ends up lost. Baggs isn't made of stone, and he becomes the old guy's pal. Baggs's belated friendship with Forshay serves a plot purpose late in the film, but Forshay serves a greater thematic purpose throughout, offering Baggs a demonstration of what can happen to old, unwanted sailors who never bothered to make themselves a life outside the Navy. This maybe explains the intensity with which Baggs pursues a deeper relationship with Maggie and Doug, an attitude that might seem implausible to stubbornly pragmatic viewers.

Director Mark Rydell has a much better handle on the material here than he did on another recent Twilight Time release, the half-bungled heist comedy Harry and Walter Go to New York, and his taste in supporting players is once again impeccable. Burt Young is as Burt Young-y as ever, as the master-at-arms who assigns Baggs shore patrol while he's stuck in Seattle. Baby-faced Bruno Kirby plays a fellow SP, who hilariously won't shut up about his sexual prowess. Allyn Ann McLerie plays Maggie's welfare case worker, and brings surprising dimension to what could have been a thankless role. Dabney Coleman, Allan Arbus, Don Calfa, and David Proval each get their own little memorable moments in the Navy base, and Sally Kirkland gets brushed aside in the bar, mere moments before Marsha Mason's backside upstages her.

The Blu-ray
Cinderella Liberty comes in a limited edition of 3000 copies. The disc comes with a booklet featuring stills and liner notes by Twilight Time's Julie Kirgo.

The Video:
Shot by Vilmos Zsigmond with a fair amount of naturalistic grit, the film's low-life character holds true in this AVC-encoded 1080p 2.35:1 transfer. There's plenty of fine detail in close-ups; wide-shots are a little softer, but not so drastically that viewers will get upset. Colors are saturated, and, while many sequences feature a low-key lighting scheme, shadow detail is there when Zsigmond wants it to be there.

The Audio:
The soundtrack is presented in both DTS-HD MA 2.0 stereo and DTS-HD MA 2.0 mono mixes. There is noticeable separation in the stereo mix, especially in the presentation of John Williams's score and the songs sung by Paul Williams, so it makes for a worthy upgrade. Both sound relatively good, with sometimes muddy, overlapping dialogue in the Robert Altman mold, but nothing is completely obscured. One subtitle option: English SDH.

- Ported over from the 2007 DVD, Rydell warmly waxes nostalgic about his experience making this flick. He has a fair number of good behind-the-scenes anecdotes, although sometimes he lapses into describing what's onscreen. Overall, though, it's a solid commentary.


Final Thoughts:
A quintessentially '70s offbeat romance. The performances, especially by James Caan and Marsha Mason, gives this flick a vitality that makes it a thrill. Highly Recommended.