Naked and the Dead, The 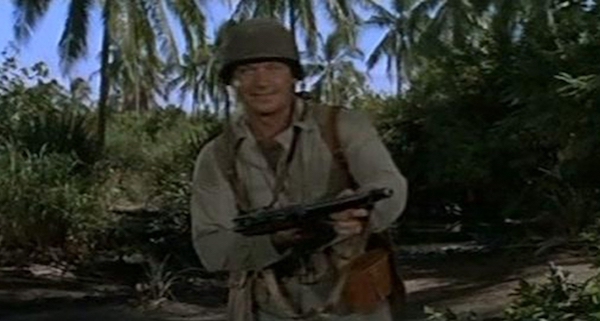 NOTE: The photos accompanying this article are taken from various online sources and do not represent the quality of the Blu-ray [which looks a LOT BETTER] under review.

The Warner Archive Collection has shifted gears somewhat and started offering some of its neglected titles on Blu-ray, even without putting them on DVD first. One of these recent titles is the 1958 WWII drama, The Naked and the Dead, adapted from Norman Mailer's infamous and acclaimed best-seller.

Now, I haven't cracked Mr. Mailer's massive tome, so I can't authoritatively report on how faithful screenwriters Denis and Terry Sanders (both better known for documentary work) and director Raoul Walsh (whose Revolt of Mamie Stover also hit Blu-ray recently) are to their source material. But, even as a newcomer to said material, I can feel some creative punches being pulled. There was obviously more freedom in what characters could say and do in print than what they could be shown doing in films at this time. And even at 131 minutes, there's only so much of the novel's 700+ pages that can be represented in a feature film.

Acknowledging those caveats, the movie of The Naked and the Dead is a solidly entertaining combat picture, even gripping in sections. In the top-billed role, Aldo Ray is a little too stiff and lumbering to be fully effective as Croft, a sadistic sergeant haunted by a dysfunctional homelife, but fortunately the movie doesn't rest solely upon his shoulders. More interesting is the ideological tug of war between Cliff Robertson as Lieutenant Hearn, a former playboy and current bleeding heart, and Raymond Massey as Hearn's superior, the coldly strategic General Cummings. Hearn is the son of a beloved soldier, but he seems far more ambivalent about the trappings of the job himself. Cummings is intent on persuading Hearn that might makes right when it comes to leadership -- especially Cummings's might.

This clash of opinion comes to life when Cummings assigns Hearn to a platoon with orders to circumvent the Japanese and establish a mountain outpost to the rear of the enemy. It just so happens to be the same platoon that Sgt. Croft has been leading. Croft, the raging bull who gets a kick out of killing surrendered prisoners, and Hearn, the inexperienced officer who sees each soldier as a human life and not a number, inevitably clash. The film allows their conflict to be somewhat complicated -- Croft is undeniably a more adept soldier than Hearn, lending some credence to his methods -- but inevitably the morality of Hollywood filmmaking demands that the flick sides with the humane man over the sociopath.

The other soldiers in the outfit are given grace notes of personality, but only a few make a significant impression. Richard Jaeckel is an expectant father who suffers some bad news. L.Q. Jones is a slightly tetched Southerner with a lingering crush on a stripteaser (Lili St. Cyr, sadly doing more wooden acting than any sort of dancing). Joey Bishop is a Jewish pugilist, who presumably got good at punching from setting bigots straight his whole life.

A mixed bag that has more good than bad moments, The Naked and the Dead will satisfy fans of "guys' pictures" from this era. 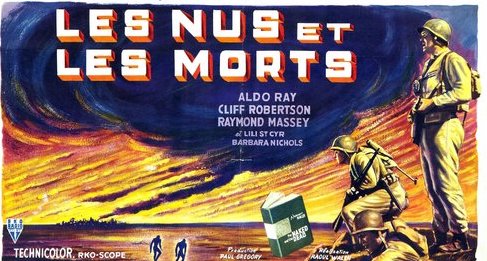 The Video:
The Warner Archive Collection has a strong track record with their Blu-ray masters, and this AVC-encoded 1080p 2.35:1 transfer is no different. The image is crisp and clean, with no significant film dirt or damage. The bitrate is generous, consistently hovering in the high 30s (MBps), and unsurprisingly there are no noticeable compression issues. Colors are stable and saturated. Apart from the expected dupe-y look of certain opticals, this is a flawless reproduction.

The Audio:
A nice range of response coming out of the DTS-HD MA 2.0 mono audio mix. I noticed a significant amount of hefty bass during many of Bernard Herrmann's music cues. Dialogue and effects are mixed well. No complaints here. One subtitle option: English SDH.

Final Thoughts:
While not a beloved classic on par with its source novel, The Naked and the Dead is well-crafted enough to warrant rediscovery. The AV quality of Warners' release is certainly a plus. Recommended.