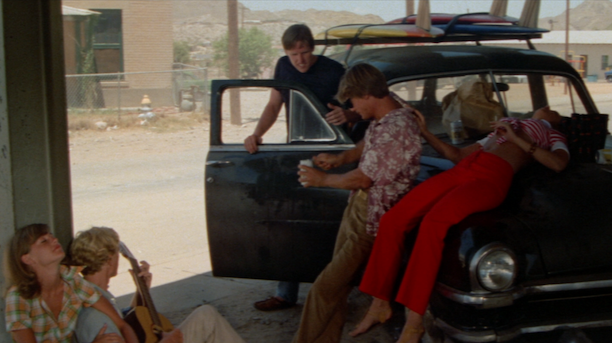 As a fan of surfing movies (especially Bruce Brown's glorious, hokey, and gloriously hokey docs like The Endless Summer), the 1978 surf drama Big Wednesday has long lingered on my to-watch list. In the past 40 years, Big Wednesday has been over-trashed and over-praised in equal measure (I think it kinda depends on how much the film speaks to your own coming-of-age experiences). Judged now on Warner Archive Collection's new Blu-ray, the flick holds up as a solid Baby Boomer nostalgia piece, with some great stand-alone sequences and some great surf footage.

Writer-director John Milius (The Wind and the Lion, Red Dawn) turns his memories of surfing in Malibu into a tale of three friends who are bound together by the waves, only to inevitably travel down different paths on the road to adulthood. Jan-Michael Vincent is Matt, a legend in his own time who has already peaked before age 20. Matt is first seen recovering from a nasty hangover that portends a further trajectory of drunkenness and self-pity. William Katt is Jack, a straight-arrow who nonetheless seems to enjoy the mischief his buddies get him into. Gary Busey is Leroy the Masochist, the madman of the group, whose aimless skirt-chasing and wave-chasing doesn't come with the existential weight of the other two.

Milius chops his story into 4 eras, starting in 1962 (also the setting of American Graffiti and National Lampoon's Animal House, if you're keeping track) and concluding in 1974. Milius's film is rich in remembered detail, which helps to distinguish it from the throwback pack, but his structural conceit robs the film of emotional continuity.

He wants to lionize these surfers and the code that binds them through the years, but the surrounding characters flounder. Lee Purcell has a promising role as Peggy, Matt's lover (and eventual wife), who upends her reputation as a fast girl who gets around, to commit to her daughter and her man. After 1962, Peggy pretty much drifts to the periphery. Even worse, Patti D'Arbanville makes a great impression as Sally, a Chicago transplant who becomes infatuated both with blonde surfer boy Jack and the let's-stay-young-forever California lifestyle. When Jack joins the Marines in the film's 1965-set chunk and preps to go to Vietnam, her character not only breaks up with Jack, but she does it offscreen. When Jack comes back in '68 to see her again, both he and we the audience are shocked to see a man claiming to be her husband answer the door. She is never seen again. The surprise is a clever bit of storytelling, but one that robs Jack and Sally's relationship of any resonance; now it's just plot.

Setting aside Milius's overblown desire to elevate the surfer mythos, and his fawning, frequent tips of the hat to John Ford (the cameo by The Searchers' Hank Worden is easily the most welcome of these), the flick has plenty of striking setpieces that require checking out. A raucous house party at Jack's mutates into an all-out-brawl when party crashers from the Valley show up, all while Jack's mother (played, in another neat cameo, by William Katt's real mother, Barbara Hale from Perry Mason) tries to read in her bedroom and ignore the damage being done to her home. When the surfers are called in to the draft board, they all affect different fake maladies and character traits to try to get out of the army, climaxing with maniac Gary Busey out-crazying Maniac's Joe Spinell, as a hard-edged army shrink.

The whole thing builds to the titular arrival of big waves, in 1974, so the old, forgotten surf heroes can prove they are still worth a damn. Of course, the surfboard that Matt rides in this final passage is essentially Excalibur, fashioned by the wise old surf guru Bear (Sam Melville) to prove once and for all who is truly "the king." Even if you don't care for this mythological machismo, it's hard to deny that the surfing (some executed by former surf champ Gerry Lopez, as himself) and surf photography in these closing sequences is breathtaking.

Another case where the whole is more than its uneven parts, Big Wednesday is a welcome addition to WAC's Blu-ray stash.

The Video:
Bruce Surtees's cinematography can be a little soft and grainy in patches, but it comes part and parcel with the era in which the film was made. The new AVC-encoded 1080p 2.40:1 transfer does an excellent job of translating the original film look to disc. Close-ups tend to feature crisp fine detail. The colors aren't overdone, but they pop when needed: bright blue skies, blue-green waves. All that tan (and sometimes sunburned) skin looks pleasing as well.

The Audio:
Apart from some distractingly blatant moments of ADR, there are no complaints about the DTS-HD 2.0 stereo audio. Dialogue is understandable, if occasionally a little buried in the mix for verisimilitude's sake. The effects, especially those crashing waves, are powerful and extremely present. The score by Basil Poledouris feels like it belongs in one of director John Milius's battle epics, but it is undeniably rousing -- and given a full-bodied presentation here. One subtitle option: English SDH.

- Resurrected from the 2002 DVD, this commentary offers an appealing mix of production memories and Milius analyzing his self-spun mythology. Some quiet patches, but a worthwhile listen overall.

Final Thoughts:
Some memorable sequences and some excellent surfing footage make this uneven but heartfelt nostalgia piece well worth a look. Recommended.