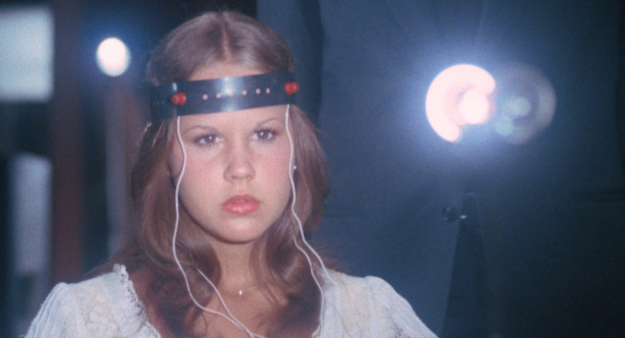 Scream Factory put out a Collector's Edition of Exorcist II: The Heretic!?! Who the heck is that for!?

Well, folks like me. While The Heretic is widely disliked (DVD Talk's review of the film's earlier disc release gives it a whopping 1-star rating out of five), it strikes me as so fascinating and bold that it's hard to dismiss.

Granted, a lot of it doesn't work. The script, credited to playwright William Goodhart, lays out its plot inelegantly; it cares far more to play around with theology, mythology, and philosophy. Clearly, these aspects of the story are what appeals to director John Boorman too -- much more than attempting to scare people. (That certainly makes it a flat-out bad sequel, while not necessarily making it a flat-out bad movie.) One assumes that Warner Brothers thought they were hiring John Boorman, the director of the taut, successful thriller Deliverance, but wound up with John Boorman, the director of the supremely out-there sci-fi excursion Zardoz. Symbolic imagery and speculative philosophical discussions abound. Sprays of split-pea soup do not.

Mostly the film hashes out the idea that evil is drawn to good. The reason that little Regan (Linda Blair) was possessed in The Exorcist, this new film proposes, is that she has a powerful goodness in her. Father Lamont (Richard Burton), who has been sent to investigate the death of Max von Sydow's Father Merrin, discovers that Regan, now 17 and living in New York, is still being pursued by the demon Pazuzu. He seeks to find a way to defeat Pazuzu before Regan's goodness is subsumed. This includes taking a trip to Africa, to meet up with a soul previously saved by Father Merrin, Kokumo (James Earl Jones).

Ellen Burstyn refused to come back for the sequel, so Regan lives with family friend Sharon (Kitty Winn) in a glamorous, mirror-filled, high-rise New York apartment. Regan is also seeing a therapist, Dr. Tuskin (Louise Fletcher), who uses an experimental hypnosis contraption that allows minds to sync up; in other words, low-key telepathy. Father Lamont butts in on one of these sessions to find out about the final fate of Father Merrin's soul, only to have Pazuzu attempt to kill Dr. Tuskin in front of his eyes. Also, Pazuzu, in addition to being a demon, is also a swarm of locusts. I think?

There are unexplained leaps in logic, story holes, a fake-y soundstage-bound aesthetic, and more than a few questionable acting choices to scare away non-adventurous viewers. Still, I hesitate to call The Heretic a movie that is "so bad, it's good" and recommend it on those terms. Goodhart, Boorman, and "creative associate" Rospo Pallenberg (he did some re-writing and some directing) take a mighty swing at a number of heady ideas with this film, and the sincerity of their effort comes across. The previously mentioned hypnosis scene, where Pazuzu attempts to stop Dr. Tuskin's heart, is a wildly imagined series of practically produced in-camera super-imposition effects that works beautifully and looks like nothing else ever committed to film.

Scream Factory's release includes the 117-minute long cut of the film, which was previously released on DVD by Warner Brothers, and the shortened 102-minute cut of the film, which was made just after the disaster of the film's initial theatrical release. It is here called the "Original Home Video Cut," since this is what was put out on VHS, and reportedly sent out to most foreign markets. In the traditional sense, the 102-minute version is a better movie: the pace is quicker and many elements that caused the film's first audiences to laugh or get bored have been pulled out. However, I kind of enjoy the rough edges and weirdness of that stuff. Like Paul Henreid's Cardinal confiding in Father Lamont that he must clear Father Merrin's name, or else Merrin might be posthumously deemed a Satanist. Or the decision to make Regan a tap-dancer who has a major freak-out during the tap recital. (Okay, actually, maybe that last bit's best left on the cutting room floor.) 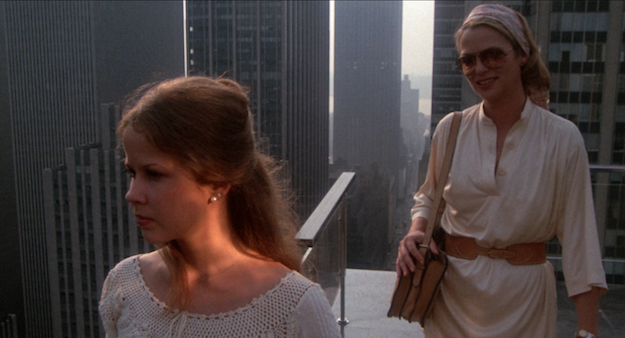 The Blu-ray
Scream Factory's Collector's Edition release of Exorcist II: The Heretic is packaged on two discs, with the 117-minute Original Cut and most of the bonuses on disc one. The 102-minute Original Home Video Cut, along with the trailers and stills, is on disc two. The package comes with a slipcover and reversible jacket art.

The Video:
Both cuts are sourced from new 2K scans. In his commentary, Scott Bosco states that the original negative has been lost, but just a quick A/B comparison between this new AVC-encoded 1080p 1.85:1 transfer and the 1.78:1 transfer included in the 2014 The Exorcist: The Complete Anthology from Warners shows a marked improvement. 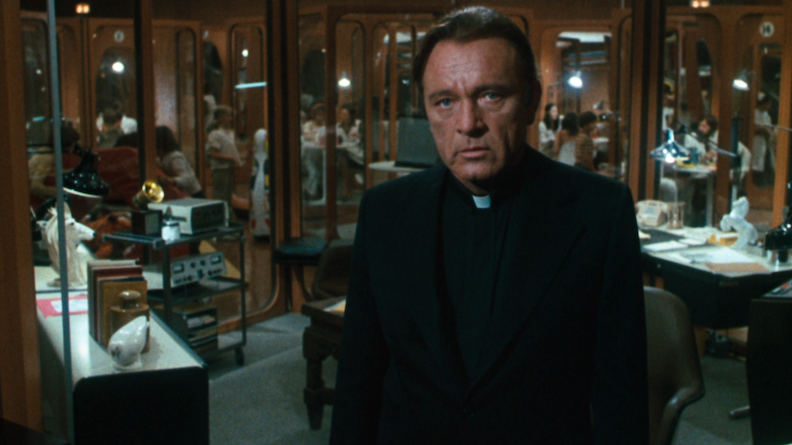 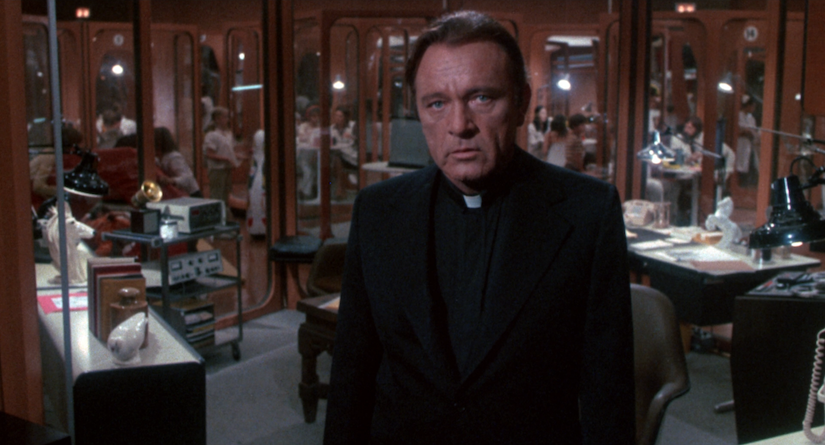 2018 Scream Factory discDetail is crisper, contrast is far less muddy, the color is more natural (not so green and sickly), and more information is visible on the sides, making the image typically feel less cramped. That said, it's not without flaws, looking sometimes soft and sometimes grainy -- likely a product of the times (and a result of having to work with a print and not the negative). Still, I doubt I'll ever pop that Warner disc in again, now that there is this superior version.

The Audio:
Both cuts come with a DTS-HD MA 2.0 mono audio mix that has roughly twice the bitrate of the earlier disc release. The sound is a touch less compressed as a result, but not a major night-and-day difference. Dialogue is typically pretty clear (most of it appears to be post-synched anyway), with solid ambient effects and a memorable score by Ennio Morricone. None of the foreign-language dubs or subtitles from the Warners disc have been brought over, but there is one subtitle option: English SDH.

- All three of these tracks are new and exclusive to this release. Director John Boorman and, separately, Blu-ray project consultant Scott Bosco can be heard on the 117-minute cut, while film writer and "Projection Booth" podcaster Mike White talks over the shorter cut. Boorman's track is mostly a reminiscence about the making of the film. Bosco is a superfan, whose track is essentially advocacy for the artistic value of the film, complimented by trivia and thematic analysis. White's is the most entertaining, since he is a well-informed fan, but one who is not above joking about the movie's flaws and leaps in logic.

Final Thoughts:
Exorcist II: The Heretic is a bizarre film, one which has thousands of detractors and a hearty band of fans. This release is for those fans, offering up two cuts of the film in great-looking new scans. The bonuses provide new appreciations of the work and shed some light on how it ended up being so darn odd. If you're not a fan, I doubt you made it this far in the review. But... if you did: yeah, you can skip this one. For the converted and the curious, this release comes Highly Recommended. 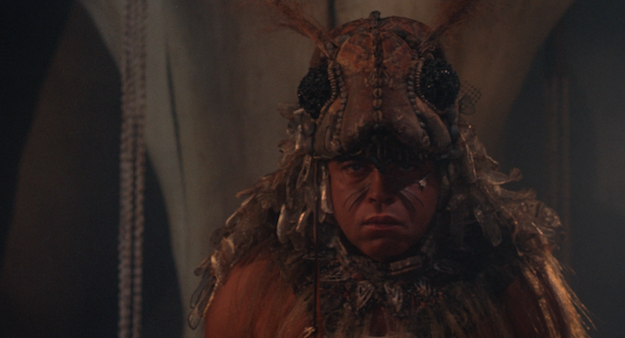