Masters of Sex - The Complete Series 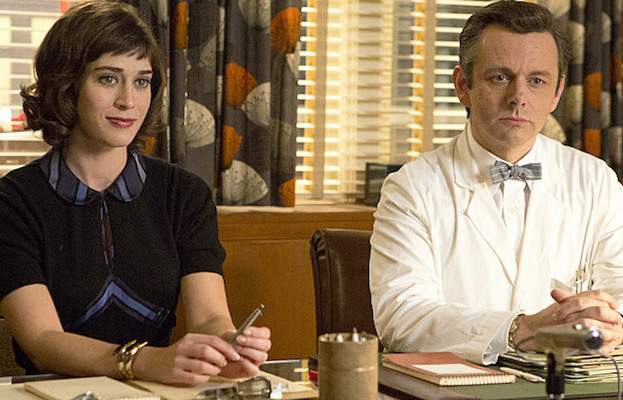 NOTE: The images included here are promotional stills that do not represent the quality of the Blu-ray set under review.

It shouldn't be so hard for a disc-loving fan of TV, but sometimes it can be. As fans of old shows like Gunsmoke and Perry Mason can attest, sometimes it feels like it takes longer than the original show ran on the air to get studios to release all the episodes on DVD or Blu-ray. And new shows are certainly not spared from this fate.

Masters of Sex, which premiered in 2013 and ran for four well-liked if not commercially earth-shattering seasons on Showtime, received full-fledged Blu-ray releases for its first two seasons in North America (DVD Talk has a review of Sony's season one set). Hardcore fans could scrounge up a region-free season three set from Europe, but that's it for stand-alone seasons. Now, Sony has licensed the show to budget label Mill Creek, and they have done what they do best: crammed the entire show onto 8 discs (half the scale of Sony's four-disc-per-season sets) and packaged them all together. If you're a fan who has been collecting as you go, and you just want season four on disc finally!, is this new set worth it for you? With no new bonuses, and a more compressed presentation, the answer is a definitive... kinda?

I'll get more into this in the technical review below but, despite the stingier encoding bitrates, season four is easily the best-looking batch of episodes in this set. So, while it could be a whole lot better, it could also be worse. In other words, if your wallet can handle it, I think this set might give you the completion you're seeking. 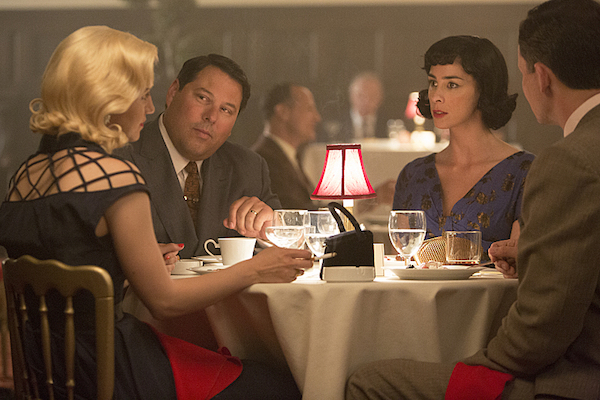 Now that we got that out of the way, let's talk generally about Masters of Sex. Based on the biographical book by Thomas Maier, the show follows the work of groundbreaking sex researchers William Masters (Michael Sheen) and Virginia Johnson (Lizzy Caplan), from roughly 1956 to 1969. (The end of season four seems designed to work as a series finale, if necessary, but leaves plenty of threads dangling that could have seen the show continue to track their career for more years to come.)

When they first meet, Bill is a world-famous obstetrician and veritable cash cow for the hospital at Washington University in St. Louis. He is brilliant, ambitious, prickly, and full of ego. Virginia is a former nightclub singer and single mother, looking to make a new start. She is attracted to Bill's visionary qualities. She is looking to jumpstart her own ambitions as well, so she fights to be his assistant. Bill sees research into human sexuality as the cutting edge of medicine, and he tries to convince his old friend, university provost Barton Scully (Beau Bridges), to let him set up a lab to watch people touch themselves and screw in the university. The establishment balks, so Bill tries to find a new way.

This pattern re-emerges throughout the series, as Bill and Virginia try to move forward with research, only to be misunderstood or misrepresented as smutty perverts by those who hold the purse strings and end up thrown out on their ears. They have to constantly hustle to keep their work going.

In the leads, Sheen and Caplan are perfect. Bill Masters is one of those pathologically troubled male protagonists that has dominated prestige TV since Tony Soprano first sat down on his shrink's couch, and Sheen makes Bill Masters incredibly magnetic -- even when he is bull-headed, cruel, or cowardly. Bill neglects the emotional and sexual needs of his wife, Libby (Caitlin FitzGerald), for years, while falling deeper into infatuation and -- eventually, the show argues -- into love with Virginia, because she understands him. This is part of why Caplan is so suited to her role, because she is able not only to be Sheen's foil, but she projects an intelligent stubbornness of her own. Virginia becomes the Rogers to his Astaire -- doing the same moves, but backwards and in heels -- all while trying to assert her own vision for her life, her future, and the work.

Showrunner Michelle Ashford uses Masters and Johnson's work as a springboard to create a world of characters all wrestling with their understanding of fulfillment, community, and human existence. Unsurprisingly, sex plays a big part in all of this. Caitlin FitzGerald's Libby starts off the show as a repressed, unsatisfied housewife, who gradually begins acting out in outrageous ways that go against her bourgeois morality; by the end of season four, she's possibly the most balanced character on the show. Beau Bridges was Emmy-nominated a few times for his appearances as Barton, but he should have won all applicable awards, for his alternately heartbreaking and inspiring characterization of an old homosexual forced to face and accept the reality of who he is, in a time that still refuses to face or accept that reality. Allison Janney is equally effective and heartbreaking as Margaret, Barton's unfulfilled wife who is stuck playing her own role in this charade.

In real life, Masters and Johnson's research into sexual dysfunction eventually led them into gay conversion therapy -- a subject which comes up at the end of season four and which might have been the focus of a fifth season -- but the show states its opinion on sexual preferences clearly, when Dr. Masters faces a legal charge of sexual deviance and replies: "How can one deviate when there is no norm?"

The writers inject the proceedings with just enough soapy melodrama to make the show addictive, while the stable of directors, which includes Michael Apted, Adam Arkin, John Madden, Karyn Kusama, Dean Parisot, Keith Gordon, and Lesli Linka Glatter, maintains a polished but grounded style. The outstanding cast features regulars Annaleigh Ashford, Teddy Sears, and Kevin Christy as members of the Masters and Johnson support staff, along with a barrage of exemplary recurring and guest performances from the likes of Julianne Nicholson, Josh Charles, Betty Gilpin, Helene Yorke, Nicholas D'Agosto, Ann Dowd, Betsy Brandt, Frances Fisher, Rose McIver, Artemis Pebdani, Courtney B. Vance, Sarah Silverman, Niecy Nash, and on and on and on. This show attracted a lot of talent, and the product speaks for itself. 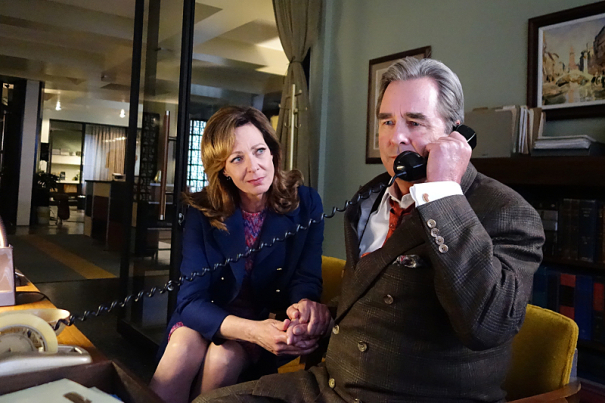 The Blu-ray
Masters of Sex: The Complete Series comes in an 8-disc set on Blu-ray, with each of the four seasons in its own 2-disc standard Blu-ray case within the larger box.

The Video:
Mill Creek's bread-and-butter is cramming as many things as they can onto discs, with quality a far lesser concern. That said, the AVC-encoded 1080p 1.78:1 transfers included are not nearly as bad I dreaded. With encoding bitrates that never crack the 20 MBps mark, these are certainly a step down from the original Sony releases. But they are on par with or better than what you would probably have seen broadcast on Showtime. Not library quality -- too much discernible noise and artifacting, especially in dark areas of the frame, for that -- but not an affront to all that is right in the world either. Also, maybe because there are only five episodes crammed in per disc instead of the other seasons' six, the season four episodes actually look remarkably strong, with vibrant colors, well-delineated contrast, and not too much noise to get in the way.

The Audio:
All episodes feature DTS-HD MA 5.1 surround audio, which does its job without ever being too showy or distracting. As a character drama, there's not a lot of fancy stuff happening in the surround speakers apart from ambience and the occasional needle drop, but overall the show has an appropriately immersive sound design. No foreign audio options or subtitles, but an English SDH track is available on all episodes.

Special Features:
All of the featurettes are taken from the first two season sets released by Sony. However, apart from the deleted scenes, they have been slapped on the discs for season four (presumably since it's the shortest season, with room to spare).


Final Thoughts:
An addictive show that deserves to be seen. The exceptional lead performances by Michael Sheen and Lizzy Caplan are matched by an appealing ensemble of recurring and guest actors. This clever retelling of the scientific quest to shed light on the American sex life is not without its moments of titillation, but the characterizations and tangled relationships sustain it beyond the Showtime-mandated flashes of skin. While it would have been infinitely preferable to have Sony finish its own run of high-quality Masters of Sex Blu-rays, this set at least does nothing to damage the show. If you already own the first few seasons, this is an imperfect but suitable enough way to finish the run. If you are new to show, then this set comes unreservedly Recommended. 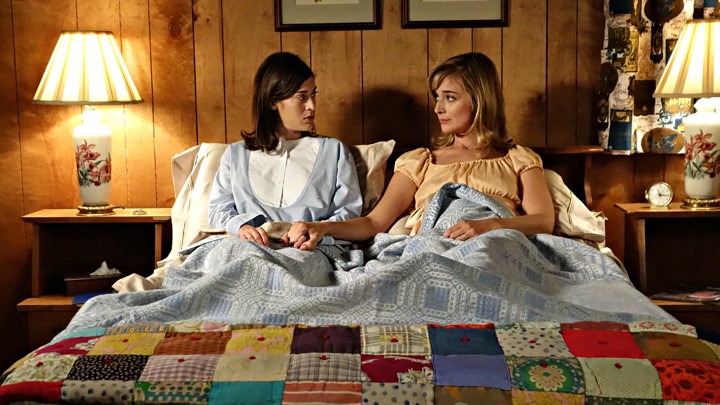