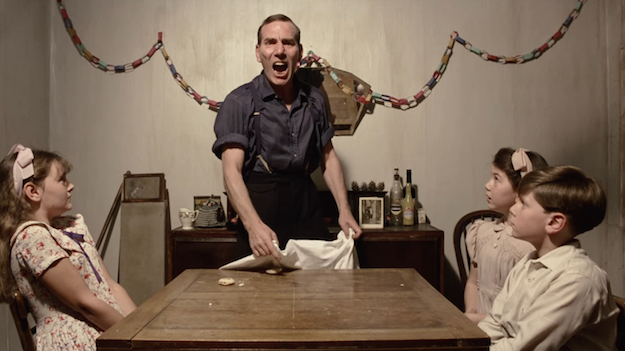 British director Terence Davies is one of those idiosyncratic filmmakers whose work I have long heard praised for its unique beauty but never watched myself. Criterion inducted his 1992 film The Long Day Closes into their collection a few years ago, but still I held off. Now, Arrow Academy's release of his first feature Distant Voices, Still Lives (1988) offers this reviewer an opportunity to get with the program.

Composed of two sections (which are actually two short films, shot two years apart, after it became apparent that the final cut of the original film was too short for cinemas), Distant Voices, Still Lives is a memory piece, tinged with nostalgia, regret, and an accumulation of trauma. Davies abandons chronology and A-to-B storytelling, as memories trigger other memories, jumping back and forth in time. The events of the film frequently echo those seen in a dozen kitchen sink British dramas, but Davies's image-driven and musical approach gives the film a stylized, dreamlike aura.

The first section of the film, "Distant Voices," exposes the anguish that Davies's abusive father, played with volcanic intensity by Pete Postlethwaite, dealt his mother (Freda Dowie), two sisters Eileen and Maisie (Angela Walsh and Lorraine Ashbourne), and brother Tony (Dean Williams). (In real life, Davies was one of ten children, although he has said he couldn't cope with writing them all in -- not even himself.) The section is framed loosely around the wedding day of sister Eileen. The father is recently deceased, but he haunts the memories of his wife and children, as flashes of past arguments, beatings, and passive-aggressive sulking are juxtaposed with scenes of family and friends, drinking and singing at the wedding. A flashback to a WWII bombing raid, where the children narrowly avoid being blown to bits, ends with another blow-up, as their father slaps Eileen's face in the air raid shelter just afterward. In an illogical but oddly truthful wedding-day moment, Eileen breaks down and cries on her brother's shoulder that she wants her father to be there.

The second section, "Still Lives," shows the family moving on, with Eileen, Maisie, and Tony starting to lead their adult lives. There is also a subtle shift from a focus on fatherhood to that of motherhood, as Maisie becomes a mother herself and Freda Dowie's matriarch must adjust to her empty nest. Even more than the first half, this section is overloaded with characters singing group songs and solos down at the pub. Eileen gets to reconnect with her rarely seen school friends, who have all married fairly disappointing husbands. These blokes are not quite as brutish as dear old dad was, but they certainly aren't sweetie pies either. The pub meeting provides a respite from a life that is not shaping up to be as satisfying as one would hope. With its juxtaposition of working class woes and sentimental singing, the film inevitably brings to mind the contemporaneous work of Dennis Potter, especially The Singing Detective, although Davies lets his characters' voices ring out without the alienating device of lip-sync.

As a first film, and as a first glimpse by a viewer of an artist's work, Distant Voices, Still Lives is tremendously impressive. Chock full of ambition and broad in scope without sacrificing the delicate dynamics of the family and friends being portrayed onscreen. It goes without saying that I will be seeking out The Long Day Closes, which I understand is similarly memory-driven but less bleak, next. If you have not seen these films before, don't make the same mistake of putting off this unique experience. 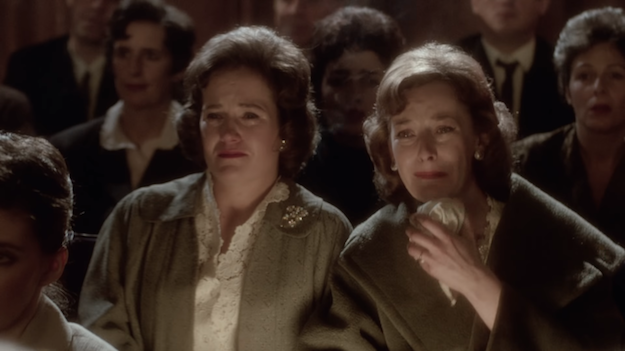 The Blu-ray
Unlike many Arrow releases, this disc is Region A locked. This is because it is nearly identical in content to BFI's Region B release for the film. It comes with a reversible cover, including newly commissioned artwork by Jennifer Dionisio. The first pressing comes with an illustrated booklet, including a new essay by Christina Newland.

The Video:
Based on what I've read online, Distant Voices, Still Lives was developed in the lab using a bleach-bypass process to desaturate the colors and emphasize the silver. Based on screenshots, earlier DVD releases appear to be nearly monochromatic. This new AVC-encoded 1080p 1.78:1 transfer, sourced from a new BFI 4K restoration, is much more nuanced in its approach to color saturation. It's less drab, frankly, and it's more lifelike in the subtle gradations of the color palette. There is a ton of film grain present in the image, which is a natural byproduct of bleach bypass.

The Audio:
A clear and satisfying LPCM 2.0 stereo track. Dialogue, singing, and ambience all blend seamlessly, along with the radio broadcasts and needle drops that help to push the memories along. One subtitle option: English SDH.

(HD, 32:14) - Geoff Andrew interviews director Davies after a screening of the new restoration. He reflects on the process of making his first film, even though he refuses to watch his own work typically.


Final Thoughts:
A uniquely structured and utterly personal look back at working class Liverpool in the '40s and '50s, driven by pub songs and radio broadcasts. Arrow (and BFI) have compiled a wealth of welcome supplements to dig even deeper into the personal and cultural history behind the film. For newcomers and long-time fans, this package comes Highly Recommended. 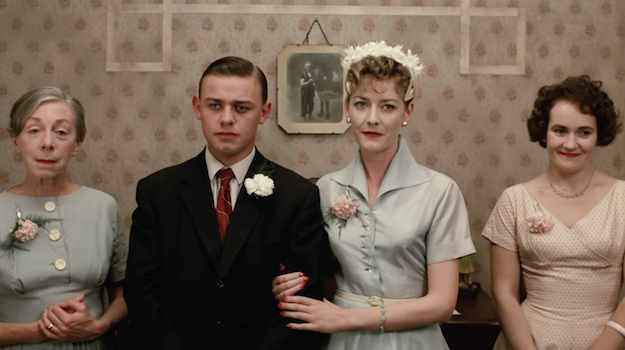