Mill Creek // R // October 23, 2018
List Price: $8.99 [Buy now and save at Amazon]
Review by Stuart Galbraith IV | posted November 27, 2018 | E-mail the Author
As mismatched a double-feature disc this might be, Mill Creek's pairing of Age of Consent with Cactus Flower (both 1969) is an incredible bargain for two very good films. An extras-loaded British Blu-ray of the former all by itself sells for more than double the price. 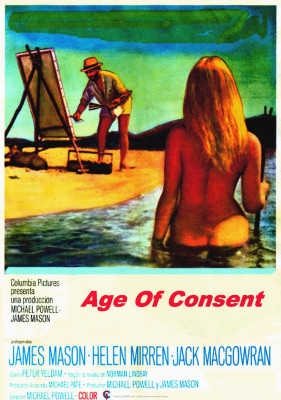 Excepting for the short (55 minutes) The Boy Who Turned Yellow (1972), Age of Consent was effectively director Michael Powell's last feature. One of the great British filmmakers, Powell's talents first became evident in the late 1930s on such films as The Edge of the World (1937) but really exploded when he partnered with Hungarian emigre Emeric Pressburger as The Archers, co-writing, producing, and directing a long series of uniquely dramatized, visually sumptuous films, including One of Our Aircraft Is Missing (1942), The Life and Death of Colonel Blimp (1943), I Know Where I'm Going! (1945), A Matter of Life and Death (1946), Black Narcissus (1947), and The Red Shoes (1948), among others. They continued into the late fifties, with less startling but still mesmerizing films, concluding with The Battle of the River Plate (1956) and Ill Met by Moonlight (1957).

After their partnership dissolved, Powell produced and directed Peeping Tom (1960), the seminal, taboo-breaking thriller savaged by the British press of the time. Indeed, so extreme was the reaction to Peeping Tom that it severely damaged Powell's reputation for decades. After three virtually forgotten films, The Queen's Guards (1961), Bluebeard's Castle (1963, a film of Bela Bartok's opera), and the Australian-made They're a Weird Mob (1966), Powell joined forces with actor James Mason and Aussie Hollywood actor-turned-producer Michael Pate to make Age of Consent, filmed mostly on the Great Barrier Reef. As with all of Powell's best films, it's uniquely dramatized, resembling the work of no other filmmaker or films.

James Mason plays famous Australian artist Bradley Morahan. Disheartened by the business end of things, to clear his head he rents a dilapidated seaside shack on a small island along the Great Barrier Reef. Cleaning the outhouse, he finds cans of house paint and, inveterately creative, begins painting the shack and everything inside it, using found items along the beach for additional components.

On the island he encounters Cora Ryan (Helen Mirren, age 22 and making her film debut), who gathers, and sometimes steals, crayfish and other seafood to sell to the local grocer, hoping to save enough money to leave her alcoholic grandmother behind for the perceived glamorous life of a hairdresser in Brisbane. Bradley, his artistic impulses now revitalized, offers Cora fifty cents/hour to model for him.

Based on the same-named 1938 novel by Norman Lindsay, Age of Consent starts out with a raggedly-produced first reel set in Brisbane, with broad caricatures of Bradley's art dealer (Frank Thring, gay as a French horn), lowbrow American buyers looking to cover the walls of their home (including Peggy Cass in an amusing bit), and hangers-on including inveterate gambling pal Nat (Jack MacGowran). These scenes somewhat resemble other emerging British sex comedies of the period and comparatively crude compared to the rest of the picture.

Once on the Great Barrier Reef, however, Age of Consent becomes an almost entirely different, almost indescribable picture. Partly it's about Cora's sexual awakening, that in modeling for Bradley she becomes conscious of her emerging womanhood, and liberated by his paintings and sketches of her, which make her feel confidently attractive. Partly also it's a film showing an artist at work, in his element, not so much an examination of the creative process, but Age of Conent presents an entirely authentic-looking portrait of the artist's environment. I'm not aware whether Mason himself painted, but his wonderful performance (complete with Australian accent) creates a believable artist who can't stop creating, using whatever materials are available to him. (When Bradley first proposes that Cora model for him, he creates an image of her out of sand and a few pebbles, a wonderful little scene.)

The movie is also a kind of celebration of how getting away from it all, in Bradley's case renting a shack far-flung from all the distractions of the city, he's able to clear his head and go back to what's really important to him.

The film was a big success in Australia, but for release in the U.S. and Britain, distributor Columbia Pictures replaced Peter Sculthorpe's score with one by Stanley Myers, and cut the film, including much of the nudity, from 106 minutes to 98 minutes. The Blu-ray offers the 2005 restored version. 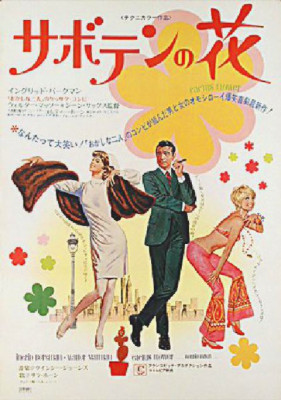 Adapted by I.A.L. Diamond from the Abe Burrows Broadway, itself based on a French farce, Fleur de cactus, by Pierre Barillet and Jean-Pierre Gredy, Cactus Flower remains stagey but still sweetly amusing, and its three leads and supporting players are fun to watch. Seen today, the film has other unintended interests, as a time capsule of 1969 lifestyles.

The story is rooted in a clever premise: Toni Simmons (Goldie Hawn, in her first leading role in a motion picture) is having an affair with a married dentist, Dr. Julian Winston (Walter Matthau), except that he's actually single. He tells his various girlfriends he's married with kids to ward off any expectations they might have about eventually getting married. The movie opens with Toni, upset that Julian spurns her on their anniversary, attempts suicide in her New York apartment, using gas from her stove. Her next-door neighbor, aspiring writer Igor Sullivan (Rick Lenz), smells the gas and rescues her, but she's already posted a letter to Julian outlining her plans.

In another twist, it turns out that Julian really loves Toni and wants to marry her, but since he's already "married" has to convince his dutiful, spinster nurse, Stephanie Dickinson (Ingrid Bergman) to masquerade as his wife, meet with Toni, and explain that she's seeking a divorce. Unexpectedly, "Mrs. Winston" impresses Toni with her straightforward manner and picks up vibes that she still loves Julian, complicating matters.

I've not read Burrows play but assume Diamond's adaptation sticks pretty close to the original book. Nonetheless, one of the interesting things about Cactus Flower is how much of it mirrors story elements from Diamond's earlier collaborations with director Billy Wilder. Toni attempts suicide but is rescued by a neighbor who takes a liking to her a la the Wilder-Diamond The Apartment (1960). Stephanie pretends to be Julian's wife, and he becomes so entrenched in the scheme that he unconsciously becomes protective as if she were his wife, a la Ray Walston and Kim Novak in Kiss Me, Stupid (1964). Julian's lies snowball out of control, forcing more and more outrageous efforts to prevent discovery, in scenes reminiscent of Walter Matthau's character in the Wilder-Diamond The Fortune Cookie (1966).

Cactus Flower isn't as good as any of those films, but it's pleasant and appealing, with many funny little moments. 23-year-old Goldie Hawn had actually appeared in two earlier movies, including a small role in Disney's The One and Only, Genuine, Original Family Band (1968), which featured her future husband Kurt Russell. But Cactus Flower was her first part of any substance, and it's easy to see how audiences embraced her much like they did with Shirley MacLaine in The Apartment at the beginning of the ‘60s. At the time she was known primarily as the ditzy eye candy on Laugh-In, but here proves her skills as gifted comedic actress. Undoubtedly the moment where Hawn won audiences over was after Stephanie visits Toni at work and, impressed by her lover's wife's demeanor, is overcome with emotion and sheds tears - a funny, sweet moment.

The long-running play starred Lauren Bacall as Stephanie, Barry Nelson as Julian, Brenda Vaccaro as Toni, and Burt Brinkerhoff as Igor. Ingrid Bergman hadn't made a Hollywood film in twenty years, and it's unknown to this reviewer why the filmmakers sought her out. Bacall would seem great for the tough-as-nails nurse side of Stephanie, but entirely ill-suited as the sensitive, subservient and lonely Old Maid. With Bergman the problem is exactly the reverse: she projects all the vulnerability but little of the assertiveness and emerging free-spirit. Matthau's character is more limited and difficult to pull off: an inveterate liar, who is also required to be somewhat lovable anyway, in spite of his selfishness. It might be enlightening to know how Barry Nelson approached the part in the play.

The movie is interesting for its depiction of 1969 New York and the relationship between the older and younger generations. Julian presents Toni with a mink stole, but she'd just as soon have cheaper leather slacks, though Stephanie is overcome when the stole ends up with her instead. The record shop where Toni works is a soundstage set, but feels more authentic than other such places in late-‘60s movies and TV shows. Today, viewers are drawn to the albums on display: The Beatles, the Beach Boys, jazz records, folk music, etc., and how music was sold in those days, when one could give it a spin in a soundproof booth and play a few tracks before purchasing it.

Cactus Flower was a big hit, a star-making film for Hawn (who won the Oscar for Best Supporting Actress) and it helped solidify Matthau's unconventional status as a leading man. The picture cost $3 million but made nearly $26 million, about the same amount as the Matthau-featured Hello, Dolly! that same year, but that had cost $25 million to make.

Mill Creek's dirt-cheap ($8.99 SRP) release puts both movies onto a single disc, but the video transfers, each 1.85:1 widescreen, look great, and the lack of extra features, subtitle options, LPCM 2.0 mono audio, etc., don't tax the bit space. Even the menu screen is absurdly basic: select film. No Extra Features and Region "A" encoded.

All by itself Age of Consent is a real steal for a Michael Powell film until recently somewhat difficult to see, and Cactus Flower, not great but solidly good, is icing on the cake. Highly Recommended.