Robert De Niro and Brian De Palma is not one of those actor-director pairings that jumps to mind as particularly iconic. True, they worked together on 1987's beloved big-screen adaptation of The Untouchables, but that seems almost incidental. Still, each man arguably owes a major debt to the other, as they both found their initial big screen success working together, on a trio of counterculture-skewed "sick" comedies that Arrow has nicely assembled in their new De Niro & De Palma: The Early Films box. 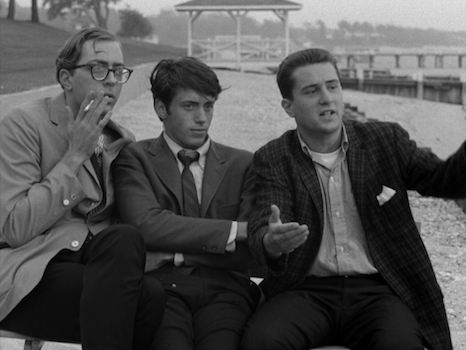 ) is listed first on Arrow's packaging, but it comes up second on the disc menu screen. Since The Wedding Party is essentially a student film (co-credited to De Palma's mentor, Wilford Leach, and Cynthia Munroe), and since it looks and flows differently from the other two flicks in this set, it's probably best to watch it separately, not in release order.

De Niro has a sizable part here, as the buzz-cut-sporting buddy of a nervous young bridegroom, doing a kind of lascivious double act with future Phantom of the Paradise star William Finley, but he's far from the focus. Charles Pfluger is the groom in question, who is put through the wringer on his way to the altar, looking to hitch up with a delightful and shockingly young Jill Clayburgh. Disapproving relatives, a disastrous stag party, outlandish old beaus, and more sketchy silliness faces Pfluger on his road to "I do."

Like a lot of student films, The Wedding Party shows signs of promise, but that's about it. De Palma and Co. flex all sorts of stylistic muscles, turn out some good scenes, but don't make an entirely satisfying whole. The influence of the French New Wave and Hard Day's Night-era Richard Lester is most apparent here, with a barrage of jump cuts and playful spatial disruptions. In one scene, the typical shot/reverse shot style used for dialogue is subverted by locking down the camera and moving the actors and furniture around between cuts, while the background stays the same. Elsewhere, a dinner table scene is established through a use of static medium shots, chopped up to travel down the table (almost like stop-motion) on matching actions. It's all impressively inventive, but viewers won't be distracted from the fact that this fast-and-loose comedy offers more faint amusement than full-bodied laughs. 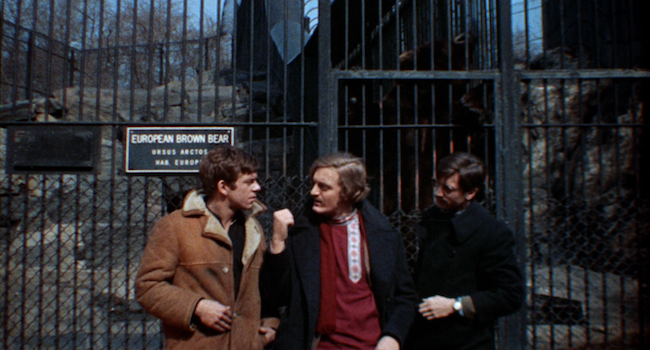 ) takes its title from the first word that thousands of young Americans saw on their draft notice, telling them to pack their bags for Vietnam. The flick opens with a well-kempt semi-boho kid (Jonathan Warden, in his only film role) walking into a Harlem bar and loudly shouting the n-word. He hopes to get his legs broken, so he will fail his draft physical. It doesn't work -- he just gets a black eye -- so his buddies (Robert De Niro and Gerrit Graham) offer some more questionable advice (bound to horrify young viewers): they try to teach him how to act gay but, you know, without using such polite language.

De Palma and his producer/co-conceiver Charles Hirsch aim to make an American Masculin féminin, but the film is really just a series of silly and raunchy improvised sketches. Much of the humor has a "you had to be there" quality that doesn't transcend the '60s downtown New York mindset, but even the flick's laughless moments provide a bit of David Holzman's Diary-style anthropology that makes Greetings time-capsule fascinating. Warden spends most of his screen time going on a series of broadly-sketched unsuccessful computer dates. Graham meanwhile is a JFK assassination conspiracy buff (shades of Blow Out) who becomes so obsessed that, in one signature scene, he draws on the body of a drowsy nude woman, to illustrate the supposed trajectory of the "magic bullet," rather than sleep with her. Supposedly, the bad taste of this scene is what got Greetings its landmark "X" rating -- although the edge of "sick" humor has gone so far past this point in the intervening fifty years that now the scene plays as strictly silly instead of shocking.

De Niro's character, Jon Rubin, is the intended De Palma stand-in. His interests, like De Palma's, lie in voyeurism -- or, as Jon puts it, "peeping." He concocts an art project -- "peep art," rather than pop art -- which will use 8mm movies to replicate the act of spying through neighbor's windows. Jon's dedication to the project is unclear, because we quickly see him using his "we're making art" pose as a blatant ruse to get his intended model to strip for him. Later, Jon upgrades to stalking a cute chick, only to get waylaid by a talkative porn aficionado, played so entertainingly by Allen Garfield that he thankfully returns for the sequel. Somewhat randomly, Jon gets shipped off to Vietnam at the end of the picture, but predictably Jon's peeping proclivity doesn't end there. 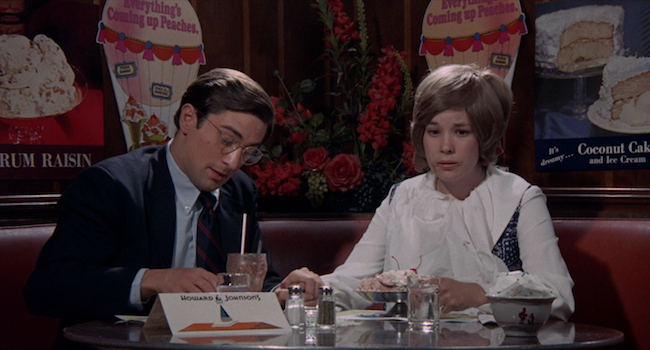 ) is funnier than (...if just as scattershot as) its predecessor. However, De Palma and Hirsch blend some sharply conceived political sketches into the ramshackle brew this time, which gives the flick a little more depth -- and unfortunately some continued relevance.

Jon Rubin is back from Vietnam, and he's back to peeping. He rents a rundown tenement flat, just because it faces a perfect set of windows for clandestine filming. He convinces Allen Garfield's porn producer to bankroll his dirty-minded rendition of Rear Window, and is quickly filming day and night. He gets a crush on lonely neighbor Judy (Sisters' Jennifer Salt), and contrives elaborate ways to seduce her. The joke, of course, is that Judy requires none of his deception and is quite willing to make love. (It's essentially a variation on the sitcom-y computer dates from Greetings, although Salt is such a good actor that she brings unexpected depth and grounding to her rather silly character.)

After a first half mostly concerned with Jon's failed attempts to turn his peeping passion into a profession, the second half becomes a trickier social satire. Jon joins up with a radical downtown theater troupe that is putting on an immersive theatrical experience called Be Black, Baby. When the group finally puts on the "performance," De Palma has a mock-PBS crew film it, cinema vérité style. The mostly white liberal audience is painted, berated, robbed, raped, and beaten in an unflinching black-and-white newsreel, which doesn't invite too many laughs as it unfolds. But when the much-delayed punchline comes, it more than delivers. The film ends with Jon transformed into a radicalized urban guerrilla, but one who never lost his twisted sense of humor. 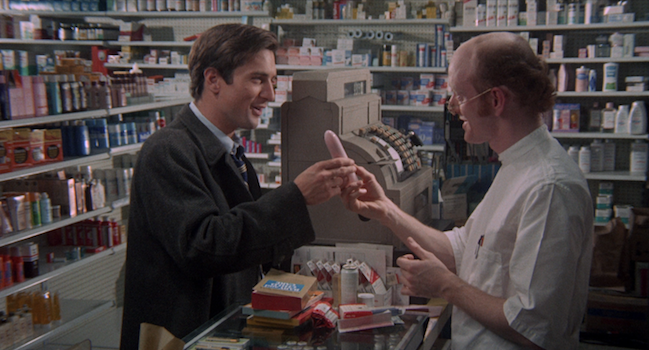 The Blu-ray
De Niro & De Palma: The Early Films is presented on 2 BDs, with The Wedding Party and Greetings sharing a disc. Each disc has its own keepcase within the box set. The first disc's sleeve reverses to show either a Wedding Party image or a Greetings image, made by Matthew Griffin. The second disc's sleeve reverse to show either the new Griffin art, or original poster art. Both cases contain different booklets with new essays and archival interviews.

The Video:
The biggest shock (a pleasant one) of this box set is the beautifully detailed and rich restoration on The Wedding Party's AVC-encoded 1080p 1.33:1 transfer (the other two flicks are framed at 1.85:1). Troma owns the film, and their video master was pretty middle-of-the-road. Thankfully, they must have stored the film materials exceedingly well, because the black-and-white photography translates beautifully in this new 2K scan. Greetings, meanwhile, still shows signs of dirt and damage, although these technical flaws arguably serve the guerrilla style of the film ultimately. Apart from some occasional softness, it looks good. Hi, Mom!, which has been in the care of MGM all these years, is much cleaner and clearer -- although it's still a pretty gritty flick.

The Audio:
Each flick is presented in LPCM mono audio with an optional English SDH track. All three films suffer from obvious limitations due to the shooting style of the film (Hi, Mom!, being the highest budget of the three, has the least of these issues), but are generally well-preserved. The Wedding Party has some noise and hiss, but the fidelity on all three films is typically high enough to be satisfyingly understandable.


Final Thoughts:
Fans of De Palma and De Niro's more mainstream work might not know what to make of these weird early indies, but those with a taste for classic cult films will find this trio delivers the offbeat goods. Highly Recommended. 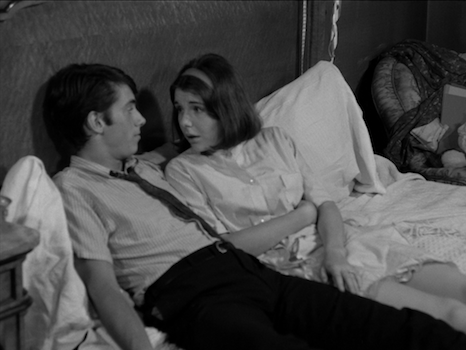