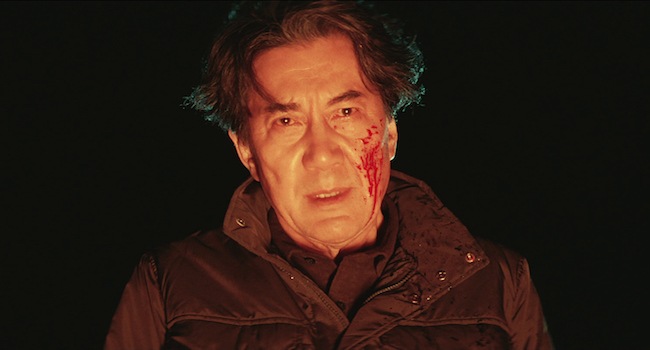 At first blush, the 2017 law thriller The Third Murder looks like an anomaly in the career of director Hirokazu Kore-eda, who tends to specialize in atypical family dramas like the acclaimed Still Walking and Like Father, Like Son. But there is a detectible kinship between The Third Murder and Kore-eda's newest film, still playing in arthouses: Shoplifters (which is great, by the way). While Shoplifters returns Kore-eda to the world of unusual family dynamics, both films eventually confront the gulf between real-world justice and courtroom justice.

The title of The Third Murder is ambiguous, possibly an allusion to the potential future of confessed killer Misumi (Koji Yakusho), who appears in the first scene bludgeoning and strangling a man to death, then setting him on fire. Because he stole the man's wallet too, he is up for robbery-murder, which comes with the death penalty. Success-driven lawyer Shigemori (Masaharu Fukuyama) is called in to get Misumi's inevitable sentence commuted to life in prison. Misumi is a repeat offender, recently free after a three-decade-stint in prison for the simultaneous killing of two gangsters (so is this the third murder, or would Misumi's death sentence be the third murder?). Because of his history, Misumi's fate would appear to be sealed.

But Shigemori is a talented lawyer, who quickly strategizes ways to throw doubt on the events of the killing to make Misumi's death less certain. As Shigemori digs deeper, however, he finds more uncertainties that don't help his case rather than facts that do. How does Sakie (Suzu Hirose), the conspicuously lurking daughter of the victim, fit into this? Why does Misumi keep changing his story about what happened that night? Is it to protect Sakie somehow?

Kore-eda constructs a twisty genre plot, but keeps his focus on the way his characters navigate around each other. The people who seem to have the most clear-cut motivations eventually become cloudy and confusing, while the prisoner Misumi, who sometimes seems like a dotty old man and sometimes seems like an ace manipulator of Hannibal Lecter's caliber, eventually comes (relatively) more into focus. Kore-eda leaves many ambiguities hanging as the film closes, with justice served in the courtroom but justice still undecided in the real world. As such, The Third Murder will probably turn off viewers looking for a by-the-numbers courtroom flick. But if you like the unrushed, untidy character dramas that are Kore-eda's bread-and-butter, you'll find The Third Murder an intriguingly offbeat morality play.

The Video:
This AVC-encoded 1080p 2.39:1 transfer looks like it is pretty accurate to its digital source. There are brief moments of saturated color, but mostly the film is an array of greys, beiges, and blues. This suits the tone of the film, but doesn't give the flick a particularly dynamic look. No major compression issues.

The Audio:
The film comes with either Japanese DTS-HD MA 5.1 surround or lossy Japanese Dolby 5.1 surround options (both with optional English subtitles). Like the video, the audio options are suitably supportive without being particularly showy. No complaints though.


Final Thoughts:
While the crime-story subject matter might be unusual for director Hirokazu Kore-eda, the character-driven, humanistic approach to telling the story of The Third Murder is purely his own. Highly Recommended.