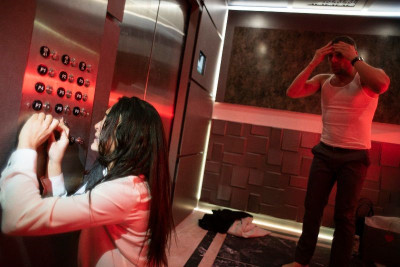 This is my first sampling of the Into the Dark series from Blumhouse productions on Hulu, and if it's any indication, the series is definitely worth your time! Down, written by Kent Kubena and directed by Daniel Stamm (The Last Exorcism) mashes the romantic comedy and horror/thriller genres with deft assurance, making viewers squirm with discomfort and delight for a variety of solid reasons. It debuts February 1st 2019 on Hulu, just in time for you to get geared up for all your Valentine's Day celebrations. Whether you love or hate that holiday, genre fans are in for a treat.

Jen (Natalie Martinez) and Guy (Matt Lauria) each wrap up their day in a lonely office tower on the Friday before Valentine's Day. Sharing an elevator, they engage in polite, stilted small talk on their way down to the parking garage. Guy's good looking, sweet and sympathetic, Jen maintains a distant veneer, she's got other things on her mind. When the elevator becomes stuck between floors, the previously unacquainted pair faces the prospect of being stuck together for who knows how long. As their imprisonment continues the situation gets more dire than either of them could have imagined.

Kubena and Stamm tackle a deliberately tricky motif with much success. Elevator movies can be as uncomfortable as an actual trip in an elevator with strangers, but amazing things can result (Elevator Movie). However, that's not always the case, so when we're faced with the prospect of watching two strangers forced into conversation for an indefinite period, we get nervous. Luckily, both Martinez and Lauria,with the help of Kubena's script) have the chops to make their characters both likeable and realistic. We even get a significant number of laughs in the first half-hour, before things get serious.

From here on out, Stamm effectively cranks up the tension, with a series of taut set-pieces (the entire movie is pretty much a taut set-piece, come to think of it), using the claustrophobic space and excellent performances from his leads to keep you close to the edge of your seat. (Seasoned viewers may see some things coming, and need to fight their way past a plot-hole or two, but that's the price one pays for such high-concept thrills!) Love Valentine's Day or hate it, fans of the dark side will love this tense, snappy thriller, which takes you to unexpected places on its journey down. Into the Dark: Down premiers on Hulu February 1st. It's definitely Recommended.